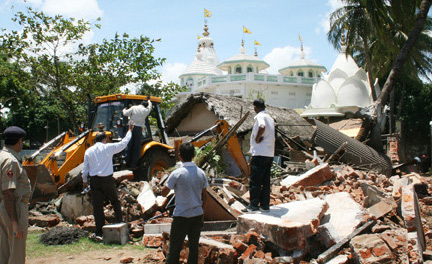 17 August 2012 Bhubaneswar. This afternoon just an hour before a scheduled meeting between ISKCON authorities and the NHAI authorities, I had a brief interview with Sripad Atmaram Prabhu in regards to the situation of the recent demolition of temple properties including the sacred memorial hut of His Divine Grace A.C. Bhaktivedanta Swami Prabhupad by the National Highways Authority of India (NHAI). This beautiful Krishna Balaram temple in Bhubaneswar, is a world renowned pilgrimage site because it houses the memorial hut of one of India's greatest Spiritual Masters, His Divine Grace A.C Bhaktivedanta Swami Prabhupad and also because just beside it is the samadhi and bhajan kutir of the great saint Srila Gour Govinda Swami.

The devotees have a court order valid until October 2012 that protected these properties from demolition threats of the NHAI in their implementation of their road widening project. In 2001, the NHAI and the local ISKCON leaders in Bhubaneswar have signed an agreement that a maximum 3.6 meters of land will be required for the construction of 6 lane road widening project. The devotees are happy to give this much land (which cuts a portion of their reception hall) from the temple (even for free) but this time the NHAI wants more than double this land. They want to get further the land where the memorial hut and the samadhi kutir is located, upto half the area of the temple pond where the Deities are brought annualy for boating pastimes during Chandan Yatra Festival. They want to take all these areas and have been maliciously planning to do this.

On 6 August while many devotees were away and busy doing their preparations for the Sri Krishna Janmastami Day (which was 4 days after), the NHAI officers in full display of arrogance, disregarding the signed agreement paper and the court order, came with 50 armed policemen and with their bulldozers demolished the temple properties. They broke down the big nice temple gate, the prasadam and reception hall. The few devotees who were there were humbly protesting and even offering obeisances to their feet, that they wait for the temple authorities and senior devotees before they do more damage but they never cared and are determined to finish the demolition. Many devotees were persuading them to postpone the demolition after the Janmastami celebration but they in turn destroyed the just newly setup stage and temporary tenthouse which was for the Janmastami Festival. They demolished the very sacred memorial hut of Srila Prabhupad which is clearly in the area beyond the agreed 3.6 meters
land. Careless and arrogant the NHAI authorities even threatened that if the devotees don't transfer the samadhi within three days, they will break the temple stairs and the temple and dump all the ruins over the samadhi site and they will arrest the devotees.

Can we allow such injustice to happen in this country? There are false rumours going on that this land is government land so the government has the right to demolish these properties. But this is totally untrue. This is ISKCON land. And even the devotees are happy to give what was agreed but this agreement was violated by the NHAI. (see agreement paper here)

Our heartfelt gratitude to Sripad Sacinandan Prabhu and other devotees by whose bold intervention the samadhi mandir of Srila Gour Govinda Swami was spared and the base of Prabhupad's bhajan kutir was saved. We pray that very soon this will be rebuilt. Negotiations are going on. The NHAI authorities are acknowledging the hundreds of petition letters they are receiving. But this is not enough. We have to make sure that a clear agreement is achieved. Please help to spread the campaign against this demolition and for future demolitions. And if you haven't sign the petition, please sign it here: