The Braj Foundation has restored Koile Ghat, the spot from where Vasudev crossed Yamuna carrying baby Krishna on his head

Janmashtami, the festival celebrating Krishna’s birth, is only a couple of days away and Brajbhoomi is teeming with visitors. Yet, at Koile Ghat, the place where the story is said to have begun, there’s hardly anyone, barring a few local villagers.

An eight-foot-tall sandstone statue of Vasudev carrying an infant Krishna stands near the steps leading to the Yamuna—a recreation of the popular mythology.

None of the tour operators guide pilgrims or tourists to this place. Neither has the tourism department planned any publicity for this well-maintained ghat. However, people of the area know their mythology.

Religious texts say that after he miraculously took out an infant Krishna from Kansa’s prison in Mathura in the darkness of the night, it was from here that Vasudev crossed the Yamuna to reach Nand’s house in Gokul on the other side of the river. As Yamuna rose to touch the divine child’s feet, balancing Krishna precariously on his head, Vasudev feared he was about to drown. “Koi le Koi le,” he cried, beseeching someone to take the baby as he feared being swept away.

Interestingly, satellite images show that Yamuna is the shortest in its width and shallowest in its depth near this ghat.

Located on the outskirts of Mathura, opposite the Refinery Township with pipelines from the refinery passing overhead, and surrounded by the lush-green Ruchil Van, Koile Ghat was in a dilapidated state till The Braj Foundation, an NGO working for water conservation, restored it to its original size—36 feet wide and 16 feet high. Using red stone to rebuild the ghat and construct an entrance platform, the NGO put up the statue of Vasudev at the entrance.

While Kolkata’s Mundhra family donated Rs 19 lakh for the restoration work, the 12.5-acre Ruchil Van adjacent to the ghat was re-planted with the help of Indian Oil Corporation. The work was completed by September 2009 and the site was handed over to the village-level Koile Ghat Sanrakshan Samiti for maintenance.

Giridharilal Sharma, who has been a member of the Samiti, says that on Diwali and Yamadwitiya nights, villagers from across Braj congregate here to float hundreds of earthen lamps in the river.

Vineet Narain, chairman of The Braj Foundation, says, “Koile Ghat is the only site in the entire Braj region where, standing on the steps, one can see Gokul on the other side of the Yamuna, Vrindavan on the left, and Mathura on the right. No other place boasts of this panoramic view. And unlike other ghats of Mathura and Vrindavan, where parking is a problem and the congested and grimy route makes it difficult for pilgrims and tourists, here one can drive right up to the entrance of the 26-step ghat. The stillness of a clean Yamuna gives it a perfect ambience.”

Mathura District Magistrate Alok Tiwari agrees that the crowd that throngs the ghats of Mathura, particularly the Vishram Ghat, needs to be diverted to alternative sites such as Koile Ghat. “Mathura had several ghats, but only around 20 have survived. For these to be restored and maintained, the primary requirement is a change in the attitude of the people. Having Koile Ghat as the alternative site for performing Yamuna puja is an interesting idea, but nothing is possible without the participation of the civil society,” he says, adding that perhaps pilgrims prefer the ghats that are nearer to the city.

But the main reason is perhaps the lack of publicity. When asked about restoration and development of various tourism/ heritage sites in and around Mathura-Vrindavan, Tourism Officer D K Sharma is quick to highlight that his department’s primary job is to create publicity.

At the same time, he admits that Koile Ghat hasn’t been promoted adequately. “The government has sanctioned Rs 12 crore for the restoration, maintenance and development of ghats this year, the highest amount in the past one decade or so. The money will soon reach the technical committees which are considering various proposals regarding the ghats. The tourism department is not directly responsible for the actual work, as the sites are under the revenue department,” he says, adding that his department is working on restoring and developing Thakurani Ghat at Gokul and Davanal Kund in Vrindavan.

It may be some time before Koile Ghat catches the attention of the administration and tourists. And till a crowd reaches here, Koile Ghat will remain a well-kept secret, a place where time hasn’t moved since the Janmashtami night, a peaceful getaway from a bustling temple town. 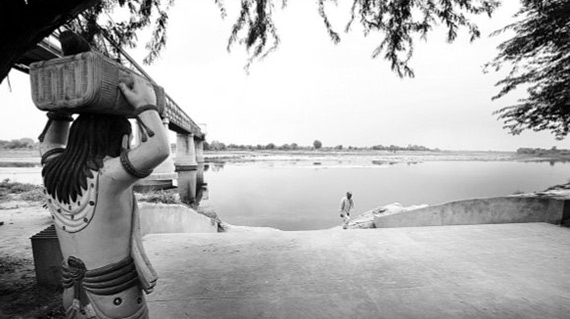