Cats and dogs can kill other animals for food without incurring sin, but if a man kills an animal for the satisfaction of his uncontrolled taste buds, he is responsible for breaking the laws of nature. Consequently he must be punished.

The standard of life for human beings cannot be applied to animals. The tiger does not eat rice and wheat or drink cow's milk, because he has been given food in the shape of animal flesh. Among the many animals and birds, some are vegetarian and others are carnivorous, but none of them transgress the laws of nature, which have been ordained by the will of the Lord. Animals, birds, reptiles and other lower life forms strictly adhere to the laws of nature; therefore there is no question of sin for them, nor are the Vedic instructions meant for them. Human life alone is a life of responsibility. 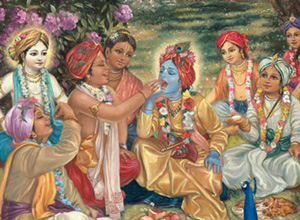 It is wrong, however, to think that simply by becoming a vegetarian one can avoid transgressing the laws of nature. Vegetables also have life, and while it is nature's law that one living being is meant to feed on another, for human beings the point is to recognize the Supreme Lord. Thus one should not be proud of being a strict vegetarian. Animals do not have developed consciousness by which to recognize the Lord, but a human being is sufficiently intelligent to take lessons from the Vedic literature and thereby know how the laws of nature are working and derive profit out of such knowledge. If a man neglects the instructions of the Vedic literature, his life becomes very risky. A human being is therefore required to recognize the authority of the Supreme Lord and become His devotee. He must offer everything for the Lord's service and partake only of the remnants of food offered to the Lord. This will enable him to discharge his duty properly. In the Bhagavad-gita (9.26) the Lord directly states that He accepts vegetarian food from the hands of a pure devotee. Therefore a human being should not only become a strict vegetarian but should also become a devotee of the Lord, offer the Lord all his food and then partake of such prasadam, or the mercy of God. Only those who act in this way can properly discharge the duties of human life. Those who do not offer their food to the Lord eat nothing but sin and subject themselves to various types of distress, which are the results of sin (Bg. 3.13).

The root of sin is deliberate disobedience of the laws of nature through disregarding the proprietorship of the Lord. Disobeying the laws of nature or the order of the Lord brings ruin to a human being. Conversely, one who is sober, who knows the laws of nature, and who is not influenced by unnecessary attachment or aversion is sure to be recognized by the Lord and thus become eligible to go back to Godhead, back to the eternal home.