Russia extricated itself from an embarrassing spat with India on Wednesday when a provincial appeals court definitively rejected an attempt to ban a version of the Bhagavad Gita, one of Hinduism’s most holy texts.

An almost year-long legal dispute had been raised at the highest level between the two nations, traditional friends and partners. The case caused an uproar in the Indian parliament and was raised when Manmohan Singh, the Indian prime minister, visited Moscow in December.

A group of Russian scholars, in a written appeal to the Kremlin, said the case “discredits Russia’s cultural and democratic credentials in the eyes of the civilized world and is driving a wedge in Russian-Indian relations.”

The controversy stemmed from attempts by prosecutors in the Siberian city of Tomsk to ban a version of the holy book that Tomsk University experts claimed “incites religious hatred, humiliates the dignity of people on the basis of sex, race, nationality, language, origin and attitude toward religion.”

Members of the Hare Krishna movement, whose founder Bhaktivedanta Swami Prabhupada wrote the contentious version, rushed to its defense, claiming Russia’s 50,000 Hindus were being singled out for persecution by the state and the powerful Christian Orthodox church.

For some, the case fit into a pattern of Russian treatment of religious minorities. Jehovah’s Witnesses have frequently been summoned before Russian courts and their publications banned as extremist, raising concerns in Europe.

In the Tomsk case, the local district court in December ruled against the prosecution, prompting prosecutors to appeal. Hare Krishna devotees burst into applause at Wednesday’s hearing when the higher court threw out the case. The Indian press had reported anxiety and frustration among Russian Hindus ahead of the ruling.

“We are grateful to the Russian judicial system,” Sadhu Priya Das, head of the Russian branch of the International Society for Krishna Consciousness, was quoted as saying.

Tomsk prosecutors had attempted to argue that they did not seek to ban the Bhagavad Gita, available in Russia since the 18th century, but only this particular version of the holy book and the commentaries it contained, an argument supported by Russian officials but rejected by the defense.

Russian-Indian relations may have been spared further fallout but Russia’s Hindus are not out of the woods yet. A Vedic cultural center in St. Petersburg, home town of president-elect Vladimir V. Putin, is facing eviction in a property dispute.

“This could be the part of the anti-Hindu campaign by a section of Russian Orthodox Christian Church zealots, after their demand to seek the ban on the Bhagavad Gita,” Suren Karapetyan, head of the Center for Spiritual Development, told India’s Zeenews. 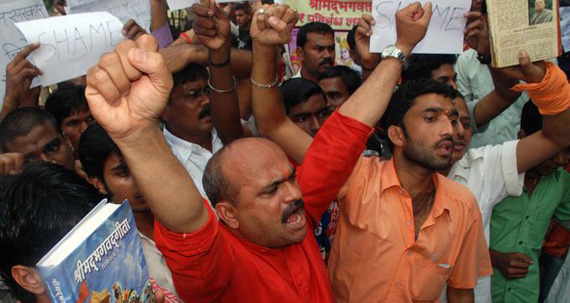