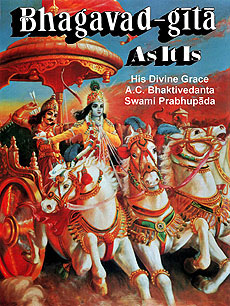 The state prosecutors have already filed their appeal in the Russian court, which has set March 6 as the date of first hearing of the appeal, according to Krishna followers in Russia, who spoke to IANS from Moscow Thursday.

"The prosecutors have filed their appeal in the Tomsk court against the earlier judgment dismissing their plea to ban Bhagavad Gita. The court has now set March 6 as the date of hearing their plea," Sadhu Priya Das, a key member of the International Society for Krishna Consciousness (Iskcon) told IANS over phone. Tomsk region prosecutor general Vasily Voikin, in his appeal, has demanded that a Russian comment included in 'Bhagavad Gita As It Is', the treatise on the Hindu sacred scripture by Iskcon founder A.C. Srila Bhaktivedanta Swami Prabhupada be banned, RIA Novosti quoted his deputy as saying.

"The prosecutor has demanded that a Russian translation of a comment in this book, earlier published in English, be banned as extremist, not the canonical text of the scripture," Tomsk region deputy prosecutor general Ivan Semchishin said.

"The bid to ban the Russian translation of the Bhagavad Gita has been misunderstood," Tomsk region prosecutor general Alexander Buksman said.
"It's important to discern gems from the chatter in this very case; the society's perception of this issue is that prosecutors are standing against the concepts of this religion (Hinduism). However, the problem is that the Russian translation has paragraphs that could be seen as promoting extremism; prosecutors started the case for that reason," Buksman said.

"The prosecutor (Voikin) is now maintaining his claims in an appeal court for that very reason," Semchishin added.

IANS had brought out the case in December 2011 to global notice, following which there was an adverse public and political reaction against the attempts by Russian state prosecutors who claimed the book spread "social discord" and "hatred" among different communities.

The initial court plea was filed in June 2011 and the trial prompted a flurry of highly critical publications in the international media.

The issue rocked the Indian parliament for two days with members demanding that the government intervene to save the Hindu holy book from being banned or branded 'extremist'.

A day before the Siberian court rejected the petition, India's External Affairs Minister S.M. Krishna met Russian Ambassador to India Alexander Kadakin and urged him and the Russian government to provide help to resolve the issue quickly.

Kadakin himself paid tributes to 'Bhagavad Gita' and termed the court case as a work of mad men.

The Bhagavad Gita was first published in Russia in 1788 and since then has been republished many times in various translations.