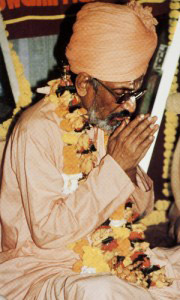 Most Revered Siksha Guru Sri Srimad Bhakti Kumud Sant Goswami Maharaj leaves His dear disciples, associates and followers in separation grief today. This is a great loss not only to the Gaudiya Vaishnavas but to the entire world. One of the brightest stars in the Gaudiya sky, Srila Bhakti Kumud Sant Goswami Maharaj took His last breath at 1.05 AM IST today (January 7th, 2012) in a private nursing home.

Earlier Srila Maharaj was admitted to the hospital as He had problem in respiration due to severe cold few days ago. Doctors also diagnosed that He had fever, sugar and lever problem. These external things just became apparent cause but ultimately it was His desire to be part of the mid-night eternal pastimes of the Lord. He is the last disciple of Nitya-lila Pravista Om Vishnupad 108 Sri Srimad Bhakti Siddhanta Saraswati Goswami Thakur Prabhupad, the Founder of world-wide Sri Chaitanya Math, Sri Gaudiya Math and Sri Gaudiya Missions to leave this planet.

At 9.45 AM IST Srila Maharaj's transcendental body was brought to the Math in Behala, Kolkata and was placed in front of the Deities. He was performed Arati, Pushpanjali. Countless devotees of various organizations visited the math and offered flowers to His body. Later He was shifted to the bhajan kutir in the 2nd floor where devotees stood in queue to get their turn to have darsan of His transcendental body. The grief of the devotees cannot be phrased and expressed in any language of the world.

Srila Maharaj's transcendetal body will be taken to Narma near Medinipur where Srila Sant Goswami Maharaj appeared. There is a 400 year old Sri Radha Kishore Jiu temple at that place where Srila Sant Goswami Maharaj used to visit in His childhood. From there He would be taken to Sri Chaitanya Ashram in Kharagpur. Later He would be taken to Keshiari where He established Sri Gauranga Math and the final samadhi will take place there.

When informed, Most Revered Srila Gurudev took the message in shock. He remembered Srila Sant Goswami Maharaj's affection to Him in the past and also His recent visit to the Behala Math (http://www.sreecgmath.org/scgmhome/node/46). Srila Guru Maharaj mentioned, "He used to give me Prasad whenever I went there. He used to show lot of affection. This time also when I went I held His hand and spoke but He did not speak anything. He was the only one left among the disciples of Srila Prabhupad but now He also left. Anything may happen anyime." He paused for a while and said again, "Even Sriman Mahaprabhu exhibited the pastimes only for 48 years", probably indicating that it is the desire of the Lord and His devotees to perfrom more pastimes on earth or go back to their original place.

Srila Bhakti Vigyan Bharati Maharaj said, "Srila Sant Goswami Maharaj was very powerful in his speech and very bold too. One time in a Harikatha assembly the guest speaker said that all jivas are non-different from brahman quoting the vedas – jiva brahmaiva na param (living entities are none other than brahman). Immediately Sant Goswami Maharaj stood up and rushed towards the speaker to beat him. He reacted and went aback. Srila Sant Maharaj proceeded towards Him and again showed him the fist as if to beat him. He again tried to save himself. Like this Srila Sant Maharaj feared the speaker 3-4 times and the guest everytime tried to protect himself from the attack.  Later Srila Sant Goswami Maharaj said, 'Brahman is nirvikar (unperturbed). If you are brahman why are you getting vikar (perturbed)?' All the devotees and other members laughed and the speaker became silent and ashamed."

Srila Bhakti Saurabh Acharya Maharaj broke into tears while He was giving Jaya-dhvani of Srila Sant Goswami Maharaj after Mangala-arati today. While on the way to Behala Math today he recollected, "Srila Sant Goswami Maharaj had lot of respect and regard to our Gurudev. After Srila Prabhupad's disappearance Srila Sant Maharaj (he was Sri Radharaman brahmachari that time) left the Math and desired to enter household life. He went to a place near Medinipur for marriage. Knowing this our Gurudev walked to that place from Medinipur on an Ekadasi day. Our Gurudev used to observe Nirjala (fast even from water) on all ekadasis. So though He was fasting and tired of programs He walked to the place of Sri Radharaman Das's parents and convinced them. After they were convinced He went to Sri Radharaman Das. As soon as he saw our Gurudev, he stood up in reveration and payed obeissances. Srila Gurudev spoke with him for a while explaining why he should remain celebate for his entire life and propagate the message of Sriman Mahaprabhu. Srila Sant Maharaj felt as if Srila Prabhupad had come in the form of our Gurudev to show him the right path. Later he gave up his family and joined the institute of Srila Prabhupad taking a vow that he will never ever enter household life."

Another incident that Srila Acharya Maharaj narrated with a lot of emphasis was the affection Srila Sant Goswami Maharaj had shown while our Math in Sri Jagannath Dham was under construction. He said, "Pujyapad Tirtha Goswami Maharaj and I were assigned the task to take care of the Math construction there. Srila Sant Goswami Maharaj invited us to stay in their math as we had no place to stay other than the nearby dharmasala which did not had good facilities. Once when the annual cart festival was appraoching, Srila Sant Goswami Maharaj informed our Gurudev that many devotees would come to their math and we might have some difficulty. Srila Gurudev wrote a letter to Pujyapad Tirtha Maharaj that for one month we should stay in a rented place. Pujyapad Tirtha Maharaj told me that I should inform Srila Sant Goswami Maharaj before moving to the rented place. As soon as I informed Srila Sant Goswami Maharaj he got up from his seat angrily and went to Srila Dandi Maharaj to call him. He came back with Srila Dandi Maharaj and told him, 'Maharaj, he is saying that they want to stay in dharmasala during Ratha Yatra time. How is this possible? Their math is still under construction. I invited them to stay here and now how can I ask them to go. You please tell them that they should stay here.' My voice choke and cannot control my emotions even today when I remember those words, 'You have come to construct a math in the birth place of our Gurudev Srila Prabhupad which nobody else could do. How will I let you stay in dharmasala where there are no good facilities? There will be many devotees here and only thing is that you should adjust with them. I will not let you stay in any place outside our Math.'"

I offer repeated obeissances at the feet of Srila Sant Goswami Maharaj and pray for His causeless mercy and beg for whatever offences I have committed to His lotus feet both knowingly and unknowingly.