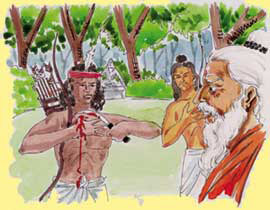 Many people consider Ekalavya’s 'guru-bhakti' to be ideal, but there is a unique deliberation concerning this topic.

King Hiranyadhanu's son was named Ekalavya. Ekalavya was, by caste, a nisadha (candala). In order to learn astra-vidya, Prince Ekalavya approached Dronacarya. Because Ekalavya possessed a low class mentality, the acarya refused to initiate him in the teachings of the Dhanur-Veda. However, Ekalavya was determined to learn the martial arts from Dronacarya and went off into the forest. There he constructed an idol of Dronacarya made of clay and by continuously practicing in front of that artificial guru he became very expert in astra-vidya.

Arjuna was Dronacarya's most beloved disciple. The acarya had told Arjuna that none of Dronacarya's disciples would ever be able to excel Arjuna in skill.

One day Dronacarya instructed the Kauravas and the Pandavas to leave the royal capital and go to the forest for hunting. As they made their way through the forest, they saw a dog whose mouth had been blocked with seven arrows. Seeing this, they were most astonished. Whoever had shot these arrows was far more expert than the Pandavas. Realizing this, they went in search of that person. Gradually they understood that it was Ekalavya, the son of Hiranyadhanu, who had tested his archery skills on the dog's mouth.

The Pandavas returned to the capital and, approaching Dronacarya, submitted this unusual story to him. With a mood of humility, Arjuna told Dronacarya that it seemed that he had another disciple who was more expert in archery than Arjuna. Dronacarya listened to these words and was surprised. He went with Arjuna into the forest and there they saw Ekalavya continuously shooting arrows like rain, fully absorbed in the science of archery.

Taking the opportunity Dronacarya came forward and approached Ekalavya, and seeing the acarya, Ekalavya immediately offered his prayers at his feet, and with folded hands he introduced himself as his disciple and remained standing. Dronacarya told Ekalavya, "You must give guru-daksina."

Ekalavya replied, "Please tell me – whatever it is, I am ready to give it!"

Then Dronacarya told Ekalavya to cut off his thumb and give him that as his guru-daksina. Ekalavya executed the order of his Gurudeva. Ekalavya did not protest in any way and unhesitatingly executed his guru's instruction.

Initially Ekalavya's guru rejected him because he considered him to be born of a low caste, yet due to his faith in Dronacarya, he established a clay deity of him and became invincible – thus his guru-bhakti was established as ideal. On the other hand, Arjuna was envious towards Ekalavya, because by his perseverance, Ekalavya had become expert; therefore Ekalavya was ruined by Dronacarya – this is the common opinion.

But this is not the opinion of the devotees, nor is it a true conception. Everything about Bhagavan is supremely true, everything about the principles of devotion are supremely true and everything in relation to the devotee is supremely true. These are the three truths – Bhagavan, bhakti and bhakta. Everything a devotee does is good; everything a non-devotee does is not very good. The non-devotee has many bad qualities because he is not engaged in satisfying the senses of Bhagavan. Those that think that mundane laws are greater than Bhagavan cannot accommodate those words regarding the supreme truth. Such persons are nirvisesavadis (impersonalists) which is to say that they cannot accept the non-differentiated specialty of Bhagavan, bhakti and bhakta.

What was Ekalavya’s fault? This analysis is essential. He wore the mask of guru-bhakti, yet he was actually inimical towards his guru. Whether his guru actually considered Ekalavya to be disqualified by his low-birth, or was simply testing him — whatever the reason may be, when his Gurudeva did not wish to teach him the science of warfare, it was Ekalavya’s duty to accept his guru's instruction upon his head; but Ekalavya did not accept that. He had the aspiration to become great.

Externally, without a guru, his practices would not have been considered lawful, or he would not be in a favorable position to become great without accepting a guru. To this end, Ekalavya concocted a clay form of his 'guru'. He only did this to attain greatness by learning the Dhanur-veda. In this way, his main intention was to satisfy his own senses. He did not offer himself as a sacrifice to his guru's desire and his own intentions were not sincere. Some may say that ultimately Ekalavya happily accepted the heartless order of his guru without protest, but if we consider this topic deeply and with keen discernment, we can observe that Ekalavya considered mundane morality to be superior to transcendental devotion. When the guru requests something to be given as daksina, then one must offer it to him – it was that sense of morality that inspired him to cut off his thumb. Ekalavya did not offer it with spontaneous devotion. The very nature of bhakti is that it is spontaneous and simple.

If Ekalavya had unmotivated and natural devotion within his heart towards Hari, Guru and Vaisnava, then the guru, Dronacarya, the best of Vaisnavas, Arjuna, and Bhagavan Sri Krsna, would not have been displeased with his behavior. Ekalavya’s attempt to learn the Dhanur-veda and his hankering to become great were not accepted by his Gurudeva. Deep within Ekalavya’s heart, he desired to try and become greater than Arjuna, the best of Vaisnavas. The aspiration to become greater than the Vaisnavas is not devotion – it is anti-devotional and it is the dharma of the Ativadis (1). According to worldly considerations, the desire to become great is regarded as good. But the effort to take a subordinate position behind a Vaisnava and the attempt to take shelter of a Vaisnava – that is bhakti.

Ekalavya wanted his expertise to be greater than that which could be acquired by learning Vedic sciences directly from a mahanta-guru – Arjuna notified Dronacarya of this. If Arjuna had not mercifully pointed this out, then the victory of impersonalism would have been proclaimed extensively. People would not have approached a mahanta-guru to accept any type of knowledge; they would have desired to create their own contradictory, concocted, clay, lifeless gurus in order to learn various sciences or devotional teachings. In this way, atheistic theories would have been established. Therefore, Arjuna had no envy towards Ekalavya; it was actually his causeless compassion towards Ekalavya and the world.

If Ekalavya had been an honest devotee of his guru, then Krsna would not have killed such a guru-bhakta – He always protects His devotees. But finally Ekalavya was killed by the hand of Krsna. This is how Ekalavya finally met his end (3).

Sri Caitanyadeva has said that we cannot judge devotion simply on the basis of external austerities. The asuras perform penances that even the demigods cannot perform (2). Against the wishes of his guru, Ekalavya wanted to become greater than the Vaisnava. Therefore he was killed by Krsna and attained impersonal liberation. Asuras are always killed by Krsna and the devotees of the Lord are protected by Krsna (4). The proof of this is Hiranyakasipu and Prahlada. Thus we should never attempt to become greater than the Vaisnavas. If we do not wear a mask of guru-bhakti, we will never become impersonalists. This is what the pure devotees have taught in relation to the narrative of Ekalavya. Expertise in performing mundane activities is not guru-bhakti. Taking shelter of the Vaisnavas is actually true devotion.

(1) The Ativadis are an apasampradaya that originated in Orissa under one Jagannatha Dasa during the time of Mahaprabhu. The word 'ativadi' means 'one who thinks he is very inteligent' (ati – very, vadi – intelligent). For more information, see Krsna Talk No.32 (http://gosai.com/writings/ativadi-apa-sampradaya)

(2) Ekalavya’s demise is found in Chapter 48 of the Udyoga-parva of Mahabharata wherein Krsna kills him as He battles with Jarasandha’s army.

(4) Madhvacarya, in his Mahabharata Tataparya Nirnaya has commented that Ekalavya was the amsa of the demon Manimanta.

Fighting for a long time with Ekalavya, who was steadfast in battlefield, Pradyumna rendered him weaponless. Previously there was a group of demons known as the Krodha-tantra-ganas, amongst whom there was a prominent demon named Manimanta. Ekalavya is the amsa of that Manimanta. (MTN 14.40)