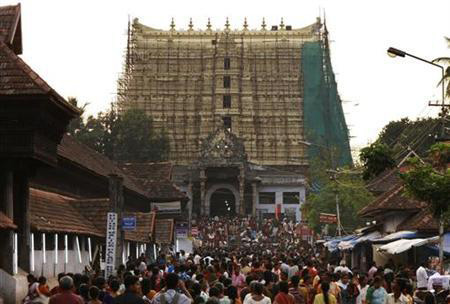 Investigators plan to pry open the final vault hidden deep under a centuries-old Indian Hindu temple as police guarded round the clock the shrine where billions of dollars worth of treasure has been discovered.

Over the last week a seven-member team of investigators has broken into five of the six secret subterranean vaults piled high with jewels that have lain untouched for hundreds of years.

Onlookers and devotees thronged the shrine in the bustling center of Thiruvananthapuram, the capital of India’s southern Kerala state, as officials said treasure worth more than $20 billion had been found — more than India’s education budget.

Sacks filled with diamonds were piled next to tons of gold coins and jewelry, media reported, in the vaults of the 16th century Sree Padmanabhaswamy temple, the royal chapel of the former rulers of Travancore, now part of Kerala state.

“The current market value of the articles found so far by the committee members would be roughly 900 billion rupees ($20.2 billion),” one temple official who was not authorized to speak to the media told Reuters.

Investigators searched the vaults to draw up an inventory of the riches because of worry about security but they had no idea of the amount of treasure they would find.

Estimates of the haul’s worth range across billions of dollars, with investigators unwilling to disclose the official amount and the ambiguity involved in valuing the priceless jewels and gold coins by weight.

Police set up a dedicated control room close to the temple Monday, as state Chief Minister Oommen Chandy pledged full state security for the hoard and promised it would remain the property of the temple after an inventory was made.

“We are ready to protect the temple wealth. We will chart out measures for the permanent security in consultation with the Travancore Royal family, which administers the temple now, and the chief priest of the temple,” Chandy told reporters.

Historians supported the estimates of the treasure’s value, noting the lucrative trade routes that passed through the region for many centuries.

“Traders, who used to come from other parts of the country and abroad for buying spices and other commodities, used to make handsome offerings to the deity for not only his blessings but also to please the then rulers,” said P.J. Cherian, director of Kerala Council for Historic Research.

As estimates of the treasure’s worth rise, a fierce debate is growing regarding what to do with the discovery, in a country where 450 million people live in poverty.

Leaders of the Hindu community want the wealth to be invested in the temple, while many intellectuals, including former Supreme Court judge Justice V. R. Krishna Iyer have suggested it should be used for the public good.

The government has said it would adhere to the Supreme Court’s ruling on ownership of the treasure found in the temple, which is still controlled by the royal family unlike other temples in Kerala which are managed by the government.

The vaults were searched after a lawyer petitioned the country’s top court to order the government to take over the temple as it did not have adequate security.

Several temples in India have billions of dollars worth of wealth as devotees donate gold and other precious objects as gifts to spiritual or religious institutions that run hospitals, schools and colleges.

The Tirumala temple in eastern Andhra Pradesh state is reported to have 3,000 kg (6,600 lb) of gold, a third of which it deposited with the State Bank of India last year, while spiritual guru Sai Baba, who died in April, left behind an estimated $9 billion estate.

Yoga guru Baba Ramdev, who staged a fast against corruption last month that lead to protests against the government, has built a $40 million-a-year global empire through yoga and various spiritual products and services.