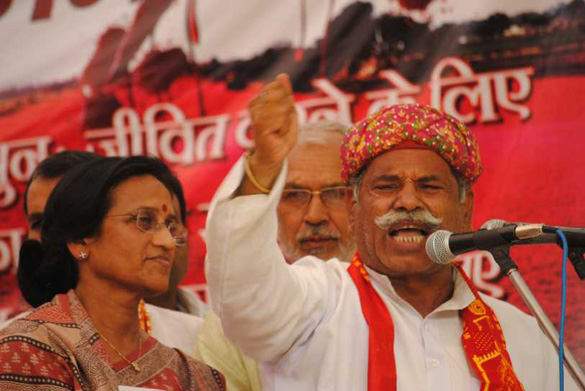 Representatives of the Save River Yamuna movement declared that on the very second day after their arrival in Delhi, the unprecedented foot march and demonstration held by Maan Mandir Sewa Sansthan had been successful in its short term objectives. They said that the government has agreed in principle to release more water into the Yamuna River so that there will be an adequate natural water flow for its entire length.

The marchers reached the outskirts of Delhi on April 13 after more than a month on the road. There were immediate signs that the march had succeeded in drawing the attention of the Central Government and its ministers. Pradeep Mathur, MLA (local representative of government) for Mathura-Vrindavan, took them to see Mrs. Sonia Gandhi, the Congress Party’s Chairperson. Ms. Gandhi assured them that their demands would be given due consideration.

This was followed by a 90 minute meeting with the Minister of Environment, Jairam Ramesh, and then another with Shri Salman Khurshid, Minister for Water Resources. They were granted patient hearings and received firm assurances that their demands would be met.

On discussion, however, participants in the Padayatra unanimously decided to go ahead with firm protests, as mere assurances from the Government were not deemed sufficient.

The Padayatra entered the city of Delhi a day before schedule. There was a lot of excitement and commotion on the first day. A press conference was held at the Press Club of India and the marchers recounted their experiences of the tough and eye-opening journey over the 750 kms they had walked along the banks of River Yamuna. They also talked about their demands and the response of various ministers and government officials over them.

The 15th of April saw tremendous action. At around 9 o’clock sankirtan marked the beginning (Shri Baba Maharaj says everything is incomplete without Harinaam) of the eventful public meeting. Jay Kishan Das Baba began the proceedings of speeches to a crowd of some 2000 people. Many farmers representing various districts along the Yamuna presented their views.

Slowly, the crowd started to grow with more and more devotees and farmers coming from various parts of the country. All were directed to the Bangla Sahib Gurudwara first for langar (meals), which was graciously offered by the Sikhs of Delhi.

At around 2 o’clock the crowd started to grow with speed. Several buses from various parts of Braj started reaching the venue. Better orators came on stage and skillfully moved the people to awareness of the importance of the issues and the need for action. Eminent personalities like Members of Parliament, MLAs and other political dignitaries started to pour in. Leading environmentalists also joined. Several senior saints from Mathura-Vrindavan also graced the occasion.

Villagers, priests, farmers, labourers, and many others from different walks of life were there. Representatives of all faiths were there, not only Hindu but Muslims and Christians also. Among the sants were Shriji Baba of Mathura, Shri Radha Kishan Maharaj of Gujarat, Swami Ram Anand of Vrindavan and many others.

Speakers from different walks of life shared divergent dimensions on the issues of River Yamuna. Then spoke the greatest speaker present, Shri Bhanu Pratap Singh, the leader of Farmers Union who were partners in the campaign.

The government had sent Ms. Rita Bahuguna (the leader of Congress party in the state of Uttar Pradesh). She presented the governments stand on the issue, which did not go down well with the campaigners. There was a huge opposition by the crowd which had now grown to a size of nearly 10,000 as various individual Yamuna activist groups kept joining the demonstration.

The government representative left the venue and after sometime the authorities sent another minister to speak for them. The stand taken by the government this time also did not gel with the campaigners who kept growing by the minute.

The gopis of Maan Mandir played the most important role in the demonstrations, that of Harinam Sankertan. There was a lot of dancing, rasias, and blissful kirtan because of the Maan Mandir devotees. Many campaigners were glued to the kirtan spot and media people had a field day.

The campaign heads then gave the government 24 hours to react. However, by late evening the authorities called up and said that they were in principle agreeing to the primary demand of releasing more water into the river. However, they needed more time to assess how much would be enough and how to go about it. In response, the campaigners offered to give input into the matter and the government officials agreed. Meetings were again held on the 16th and more fruitful discussions were had.

The campaign has moved forward but a lot still needs to be done.

People from across the world need to keep reminding the government that they are concerned about the issue and are watching how it responds to the demands for a cleaner Yamuna. Please visit the website at Braj Dham Sewa to find out how you can participate through letter writing and petition signing, etc. 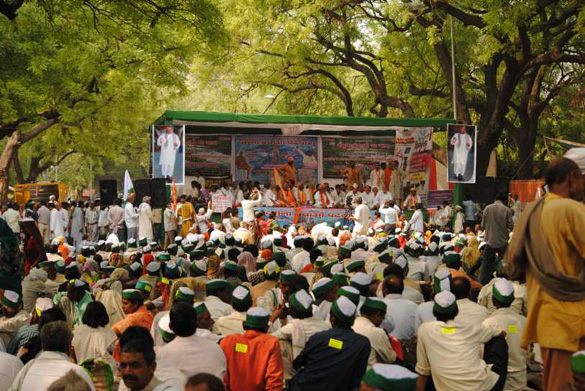