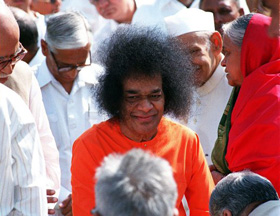 Sathya Sai Baba, one of India's most famous gurus, died in hospital on Sunday, triggering a global outpouring of grief and tributes from devotees across politics, sport and entertainment.

He was 85 and finally succumbed to heart problems after being in a critical condition for more than three weeks, his doctors said.

Thousands of Hindu followers massed at the Institute of Higher Medical Sciences hospital where Sai Baba had been treated in his hometown of Puttaparthi, in the southern state of Andhra Pradesh.

Police used barriers to hold back mourning crowds, and appealed for public calm after the death was announced.

"Sai Baba is no more with us physically. He breathed his last at 7:40 am and died due to cardio-respiratory failure," a statement from the hospital said. "His body will be kept for public worship for two days on Monday and Tuesday."

Devotees had congregated in the town over recent weeks to hold special prayers asking for a miracle to allow Sai Baba to recover.

He was credited by millions of followers across the globe with having supernatural powers, including an ability to conjure objects out of thin air, remember past lives and cure terminal diseases.

Prime Minister Manmohan Singh said the Indian nation would deeply mourn the death of Sai Baba, who "was an inspiration to people of all faiths."

"He was a spiritual leader who inspired millions to lead a moral and meaningful life even as they followed the religion of their choice," Singh said, adding that the guru taught "the universal ideals of truth, right conduct, peace, love and non-violence."

Tendulkar had said on his Twitter page Sunday that he was praying for Sai Baba's health and asked others to join him.

The guru claimed to be the reincarnation of a former holy man, Sai Baba of Shirdi, who died in 1918.

His organisation has funded health and education projects in India, including hospitals and clinics that say they are able to cure ailments beyond the capabilities of mainstream medicine.

From his ashram in Puttaparthi, he built an empire of schools and centres that spread his influence worldwide.

One of his biggest financial supporters was the former owner of the Hard Rock Cafe chain of restaurants, Isaac Burton Tigrett, who went to live in Puttaparthi and donated much of his fortune to the Sai Baba trust.

Puttaparthi expanded into a major pilgrimage town, boasting a university and even an airport as Westerners, Indian students and the destitute clamoured to be close to a man they saw as an incarnation of God in human form.

As well as hospitals and clinics, the Sai Baba organisation operates drinking water schemes, a museum, a planetarium and prayer rooms and centres across the globe.

Always dressed in saffron-coloured robes with his trademark afro-style hairdo, his showman antics in which he would miraculously produce gold coins or watches on stage at public meetings brought him both fame and notoriety.

He also faced allegations of sexual abuse of young male followers, which his opponents said were ignored by Indian authorities due to his power and popularity.

His death on Sunday was covered by Indian television news channels with reverence as interviewees remembered meetings with Sai Baba, his apparent miracles and long record of charity work.

He had used a wheelchair since 2005 and made fewer public appearances after fracturing his hip in 2006.

The guru narrowly avoided death in 1993 when four men armed with knives burst into his private apartment in what was described as an assassination attempt.

A fight ensued in which two devotees were stabbed to death before police shot and killed the assailants.