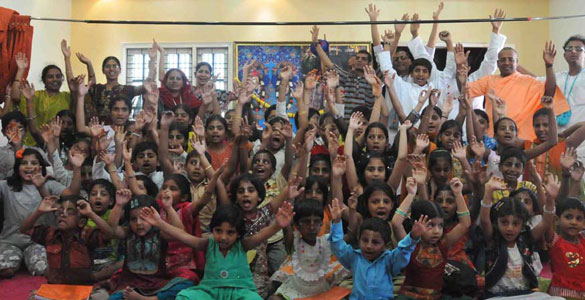 Last year ISKCON Secunderabad started a namahatta center in Kukatpally area which is a part of the city’s IT neighborhood. The center has grown by leaps and bounds. A grand Ratha-yatra in the area was held within two months of the center’s opening.

The area is inhabited by large number of DINK couples (double income no kids) but of course there are others who have kids.

When the center started the children programs, many parents approached the center and expressed their inability to attend due to work pressure but at the same time wanted their kids to attend the programs.(Of course, over a hundred adults still show up every Sunday)

The center’s programs were well received from the day one. The attendance swelled to the capacity and now another evening batch needs to be started.

This summer, ISKCON Secunderabad is training 2000 children in 4 camps, starting April 23rd. 200 devotees will be engaged in managing the camps. Education minister, Government of Andhra Pradesh, will inaugurate and the campaign brochure was launched by HH Radhanath Maharaja on Wednesday, 30th March in Secunderabad.