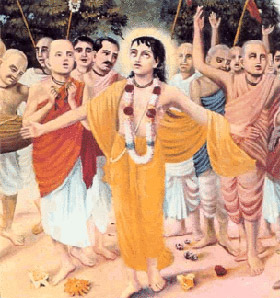 On this day, why has the Golden Sun arisen wearing red cloth? Why has the wonderful season of Spring descended to the earth?

Why are all the trees, shrubs and creepers full of fruits and flowers? Why do the birds and bees sing their songs with such bliss?

Why are the most fallen and wicked people now effulgent and full of happiness? Why have those with great knowledge, noble birth, material wealth, and great pride become so unfortunate?

A heavenly wind has dispelled all worries and has brought hope, and the sadhus have become mad with a bliss that is spreading everywhere.

Never before has such a sound been heard – from all directions, a thousand voices chanting the Names of Hare, Krsna and Rama! Everywhere becomes the divine abode of the Holy Name. Hari Hari Hari bol!!!

During the full Moon of the month of Phalguna, on the colorful day of the swing festival, the devotees worship the Lord with love. No one can comprehend the feelings and sunstance that awakens within the heart from this sankirtana.

As twilight nears, the warm sun sets; but why is his golden hue embraced by a dark cloud? That indescribably beautiful Golden Moon has arisen, illuminating the eastern mountains.

The Golden Moon covers the dark blue sky, and its darkness disappears into gold. At that moment the sadhus sing that divine love has descended and no contamination can remain.

The mahajanas have explained that this eclipse is a trick to make everyone chant the Holy Name in sankirtana. When Gauracandra descended, the sins of Rahu were destroyed and the moon was filled with the wealth of illustrious love for Krsna.

All those who understand the essence of everything become ecstatic when the Dark Blue hides within Moon. He is the hidden avatara who hides Himself under the moon of the effulgent beauty of the love of Sri Radha.

This prayer is to the beautiful Lord Syama, who now has the heart and halo of Sri Radha – Gauranga, who had descended and brought nama-prema (love for the Holy Name). Continuously chant, “Jaya Jaya Gaura!”