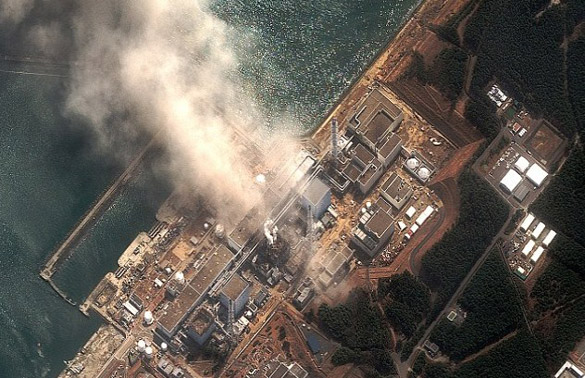 Today, the eyes of the world are on the dire situation unfolding in Japan, which threatens to become a global disaster of unprecedented proportion. Srila Prabhupada has given us a wealth of instruction to help us understand and deal with such situations.

From the Introduction to Life Comes From Life:

"Though beset by internal doubt and division, modern scientists have somehow managed to present a united front to the nonscientific public. Their behavior brings to mind the worst in political and corporate trickery. For instance, despite the recent outcry over their masking the difficulties of maintaining safety standards at nuclear power plants, the scientists and the government remain committed to nuclear power and even make light of the fact that there is no safe way of dealing with radioactive waste."

In his purport to Srimad Bhagavatam 3.9.10, Srila Prabhupada describes the hellish activities of these scientists and industrialists:

"Such nondevotees engage their senses in very troublesome and extensive work, and they suffer insomnia at night because their intelligence constantly breaks their sleep with various mental speculations. They are frustrated in all their various plans by supernatural power. Even great sages, if they are against Your transcendental topics, must rotate in this material world.

As described in the previous verse, people who have no taste for the devotional service of the Lord are occupied in material engagements. Most of them engage during the daytime in hard physical labor; their senses are engaged very extensively in troublesome duties in the gigantic plants of heavy industrial enterprise. The owners of such factories are engaged in finding a market for their industrial products, and the laborers are engaged in extensive production involving huge mechanical arrangements. "Factory" is another name for hell. At night, hellishly engaged persons take advantage of wine and women to satisfy their tired senses, but they are not even able to have sound sleep because their various mental speculative plans constantly interrupt their sleep. Because they suffer from insomnia sometimes they feel sleepy in the morning for lack of sufficient rest. By the arrangement of supernatural power, even the great scientists and thinkers of the world suffer frustration of their various plans and thus rot in the material world birth after birth. A great scientist may make discoveries in atomic energy for the quick destruction of the world and may be awarded the best prize in recognition of his service (or disservice), but he also has to undergo the reactions of his work by rotating in the cycle of repeated births and deaths under the superhuman law of material nature. All these people who are against the principle of devotional service are destined to rotate in this material world without fail…"

The science of Krsna Consciousness teaches that one cannot escape the threefold miseries caused by the mind and body, the other living entities or the devatas, and the only solution is to be found in taking shelter of the bona fide Spiritual Master.

"It is the duty of a disciple approaching a spiritual master to inquire about his constitutional position. In conformity to that spiritual process, Sanatana has already asked, "What am l, and why am I suffering from the threefold miseries?" The threefold miseries are called adhyatmika, adhibhautika, and adhidaivika. The word adhyatmika refers to those miseries caused by the mind and body. Sometimes the living entity suffers bodily, and sometimes he is distressed mentally. Both are adhyatmika miseries. We experience these miseries even in the womb of our mother. As we well know, there are many types of miseries that take advantage of the delicate human body and give us pain. Miseries inflicted by other living entities are called adhibhautika. These living entities need not even be large, for there are many–such as bugs–that can make us miserable even while we are sleeping in bed. There are many insignificant living entities, like cockroaches, that sometimes give us pain, and there are also other living entities who are born on different kinds of planets and who give us miseries. As far as the adhidaivika miseries are concerned, these are natural disasters that originate with the demigods of the higher planets. For instance, we sometimes suffer from severe cold or hot weather, from a thunderbolt, or from earthquakes, tornadoes, droughts and many natural disasters. In any case, we are always suffering from either one or a combination of these three kinds of miseries.

Sanatana's inquiry was therefore an intelligent one. "What is the position of the living entities?" he asked. "Why are they always undergoing these three kinds of miseries?" Sanatana had admitted his weakness. Although he was known by the masses of people as a greatly learned man (and actually he was a highly learned Sanskrit scholar), and although he accepted this designation, he did not actually know what his constitutional position really was and just why he was subjected to the threefold miseries.

Approaching a spiritual master is not just a fashion but is a necessity for one who is seriously conscious of the material miseries and who wants to be free of them. It is the duty of such a person to approach a spiritual master. In this regard, we should note similar circumstances in Bhagavad-gita. When Arjuna was perplexed by so many problems involving whether to fight or not, he accepted Lord Krsna as his spiritual master. It was also a case of the supreme spiritual master instructing Arjuna about the constitutional position of the living entity."

Despite the pressing weight of maya's influence in this Kaliyuga prison house, Srila Prabhupada offers us the only real medicine: the chanting of the Holy Name:

"You have asked about whether nuclear devastation on this planet would effect the Sankirtana Movement. No, there is nothing that can stop the Sankirtana Movement because it is the will of God Himself, Lord Caitanya, that His Holy Name be heard in every town and village. Neither can the demons devastate this planet independent of the will of Krsna. Nothing happens without His sanction. If Krsna wants to kill someone no one can save Him, and if Krsna wants to save someone no one can kill him. For our parts we should just be determined to carry out our mission against all opposition, demons, nuclear war, whatever. The whole universe is finally subject to certain annihilation by the will of Krsna, but devotional service is eternal and is the only certain way one can save himself from devastation. We can preach all over the world that the only way to be saved from collective and individual devastation is to take to the chanting of Hare Krsna. In short, this material world is a very precarious place therefore we should always chant Hare Krsna and seek Krsna's protection."

And should we find ourselves faced with the most severe outcome of this nuclear disaster:

"So I am fortunate enough that you are all so anxious, but we must always depend on Krishna. Rest assured that this nonsense idea of cataclysmic earthquakes will never take place. And even if it takes place, why should we be afraid of it? As soon as there is sign of such earthquake, we shall sit down together and chant Hare Krishna. So it will be a great opportunity of meeting death while chanting Hare Krishna." 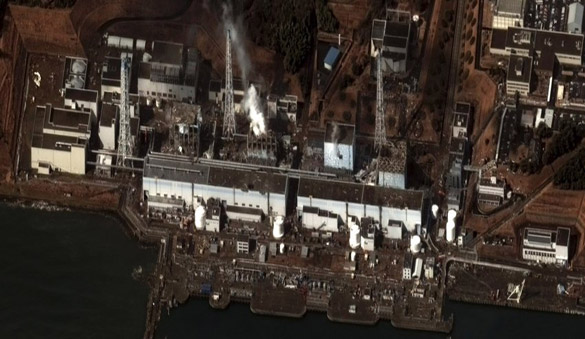