In his Niti-sastra, the wise brahmana statesman Sri Canakya Pandita has written:

Even though perched on the pinnacle of a palace, can a crow become Garuda? (Niti-sastra 16.6) 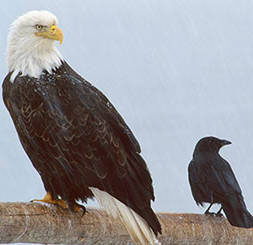 The metaphor given here is that of a crow, who poses and sits on the pinnacle of a palace and thinks he is an eagle. The eagle is deemed as the king of birds. He has attained that title, not because he sits on the highest peaks, but because he carries with him the grace and the tenacity of a king. That qualifies him for the title. If a crow imitates an eagle by sitting on the apex of a tree, it won’t instill in him the other qualities of an eagle. We live in a world of instant fame and fortune. Many individuals and groups, irrespective of their profiles and occupations, seek immediate success and the propensity to acquire a name for themselves. Yes – it’s all very flattering to have our voices heard amongst the crowd, to have many followers, to be the center of attention, and to have the fame and riches that comes with it, but then all at the sake of one’s integrity, self deception and ultimately deceiving the ignorant masses. The world has changed dramatically over the last century, not just demographically, but also in how we live our lives in this senseless, modern materialistic chaos. The majority of the people is impious and indulges in debauchery. Now and then, when someone does become inquisitive about the true meaning of life, their questions are ready to be answered by the ‘god-men’ who act has gurus and spiritual masters. They’re not difficult to find nowadays since they have sprung up practically everywhere.

Materially speaking, becoming a god-man definitely has its perks. Just imagine – wouldn’t it be a terrific opportunity to take a break from our dull lives, boring families and bullying bosses? Given the endeavor one needs to be even slightly successful in this world, becoming a god-man is probably the easiest way to attain instant fame and fortune. You can avoid the morning rush-hour simply by traveling around the globe in our own private jet and have all material comforts within reach. All one needs to do is invent some breathing techniques, some yogic exercises or package some speculative mantra meditation, then give it a Sanskrit name and pass it off as ‘spirituality’. Depending on how creative and innovative one wants to get, many tricks could be easily pulled off.

In this day and age, spirituality clearly isn’t about being spiritual and certainly has nothing to do with God anymore. This new brand of spirituality created by the god-men now comes with a business plan, along with marketing, syndication and publishing rights. If you manage to do it well, you can probably have a hundred asramas on six continents named after you! It’s certainly a lucrative way of life – the only sacrifice one has to make is simply to give up one’s daily struggle and hardships and start acting like God Who are these god-men? What are their true intentions and do they have any real concern for the lost souls in this material world? These god-men are no more than opportunists and businessman peddling their concocted, baseless philosophies in order to live in luxury. They claim that they have divine powers to perform miracles and extraordinary feats gullible people, in desperation, fall prey to their smooth talk and become their followers. They use many popular titles such as Sri Sri, Bhagavan, jagat-guru etc. and claim to be avataras, making a mockery of what the sastras say. However, titles don’t carry much weight when it comes to true excellence and authenticity. All these titles are acquired simply by their expertise in word-jugglery, in performing street magic and in social welfare work. Cap it off with saffron robes, a large rudraksa-mala and long hair and beards and they have the ignorant masses in the palm of their hands.

However, despite their success in attaining many followers, opening asramas, publishing books, performing welfare work etc. such god-men cannot maintain a proper spiritual standard. Because they are not on the platform of suddha-sattva (pure goodness), they eventually have to submit to their base natures again.

Even if a dog is made king, he will still end up eating someone’s shoe. (Hitopadesa)

One who sincerely desires proper spiritual guidance will certainly find a true bona-fide spiritual master. But someone who wants to compromise their spiritual quest will only find imposters who will loot them in every respect and leave them in such a condition that they will finally lose all faith in the system of guru and disciple. That is why it is imperative that one should first understand what the sastras say about false gurus.

One can find many gurus who can take away the wealth of the disciples, but there are few who can remove the miseries of their disciple. (Padma Purana)

There are also injunctions for abandoning such bogus gurus:

A guru addicted to sensual pleasure and polluted by vice, who is ignorant and has no power to discriminate between right and wrong, or who is not on the path of suddha-bhakti must be abandoned. (Mahabharata, Udyoga-parva 179.25)

What are the qualifications of a true guru according to scripture? In the Visnu-smrti it says:

One who is an ocean of mercy, who is fulfilled in all respects, who has all good qualities, who works for the benefit of all souls, who is free from lust, who is perfect in all respects, who is well-versed in the scriptures, who knows the science of Krsna, who can remove all the doubts of his disciples, and who is always alert in the service of Krsna is known as a genuine guru. (Hari-bhakti-vilasa 1.45-46)

It is also stated in Bhagavatam:

A person who is searching for the Absolute Ultimate Truth must surrender to a guru who knows the inner meaning of the Vedas, is fixed in the Absolute Truth, and is expert in sastra. (Bhag.11.3.21)

A peaceful sober person who can control the urge to speak, the mind, the urges of anger, the tongue, belly and genitals is qualified to make disciples all over the world. (Upadesamrta 1)

That being said, it also doesn’t matter what caste the guru is from, as supported by this verse from Padma Purana:

A brahmana, ksatriya, or vaisya can be guru for the sudra class, but a Vaisnava, even if born a sudra, because he is dear to the Supreme Personality of Godhead, can be the guru of these higher orders.

Although a guru must have all the knowledge of the sastras, dry knowledge alone does not qualify a person to become a guru. In Srimad Bhagavatam it says:

One may be expert in Vedic scholarship, but if he fails to understand the position of the Absolute Truth and doesn’t recognize Krsna as the supreme Personality of Godhead, all his study is a waste of time. His hard work will be his only reward, and his efforts will be like the labor of one who struggles to maintain a cow that has no calf and cannot produce milk. (Bhag.11.11.18)

Hence, the position of guru is like a ‘grand throne’ that may bring many followers, fame, wealth and knowledge, but these are not an indication of one’s greatness or authenticity. One’s greatness comes from one’s virtue and true teachings. It is sheer foolishness to think that anyone simply sitting on the throne of the guru is automatically great! Excellence is attained through efficacy – not by clinging to a tall throne. A true spiritual master has only come to deliver us from the heat of the huge forest fire of material life. Other than this, he has no other purpose but to rescue as many souls as possible. Pseudo-gurus, on the other hand, only have their own ignorance and confusion to offer to the world. The only miracle that needs to be performed by a guru is the miracle of his instructions – not any conjuring tricks with the willingness to deceive the common people and take them away from the true path to God. A false teacher seeks to bind himself to the energy of his neophyte followers, whereas a sad-guru receives all his energy from his divine guardians above. He has no need to bind himself to his followers – it is we who are dependent upon him and not vice-versa.

Only by praying to Krsna sincerely and taking association of saintly persons can we find a genuine guru. Then with a humble demeanor and with sincere inquiry and service to him, we can tread the path of purification and actually understand the true purpose of human life.