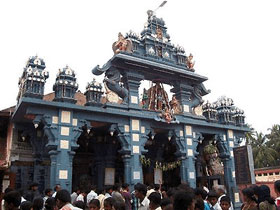 Mathura, Uttar Pradesh, India. In an unprecedented display of solidarity with the movement launched by the ascetics and Sri Krishna devotees of the Braj Mandal, temples here were shut down for two hours to protest the pollution in the river Yamuna.

In the evening Monday, thousands of locals, high priests of the Sri Krishna, Baldeo (elder brother of Krishna) and Nand Baba (father of Sri Krishna) temples joined the foot march along the banks of the Yamuna with thousands of followers.

The markets too remained closed.

Residents of Gokul are particularly angry as a barrage constructed on the Yamuna has distanced the historical banks of Gokul from the river.