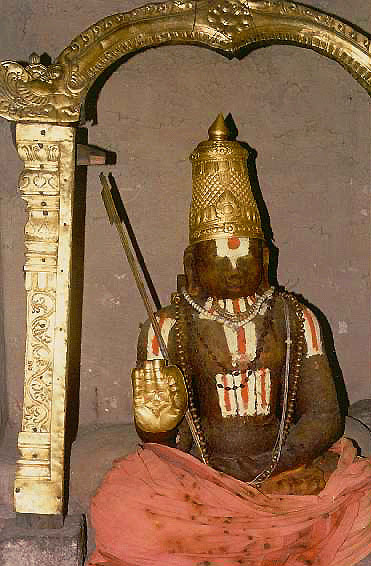 The Disappearance day of Sri Ramanujacarya is observed on February 13th.

The Guru refused to initiate the learned disciple six times, but the disciple was not discouraged and came back for the seventh time! The gracious Guru, seeing the sincerity and earnest of Ramanuja, now gave him the Mantra, warning –

"Do not disclose the Mantra to anyone, else you shall suffer the agonies of Hell."
"And what will happen to those who hear the Mantra, Sir," asked Ramanuja innocently.
"Why, my son, the power of the Mantra would lead all those to salvation!"
"What is more desirable than thousands of people attaining to heaven even if I alone be damned," thus thought the kind hearted Ramanuja, and climbing up the platform in a temple shouted – "Come, O my brothers, come! Listen to this Mantra that will open floodgates of liberation for you."

And in front of all, he repeated the Mantra aloud.

Such a large hearted and compassionate soul was born at Sriperumbudur (in the southern part of India) in the year A.D. 1017. After Acharya Shankara, Ramanujacharya can be said to have exerted maximum influence on Indian masses through his philosophical doctrine of Vishishthadvaita or qualified Monism. The seemingly dry and abstract conception of Reality of Acharya Shankara overwhelmed average mind, and thus a need was felt of such conception of God as would profess natural love and devotion for Him. Acharya Ramanuja can be said to have fulfilled this demand of the time.

Initially, Ramanuja studied the Scriptures and the Vedanta under the guidance of a great scholar Yadava Prakasha. However, soon they parted their ways, as differences cropped up in their interpretation of the Scriptures. Ramanuja, though young and still a student, showed unusual insight and grasp of the subtleties and nuances of Vedanta, and as if scored over Yadava Prakasha. It is said that the matter took such a turn that the teacher began to hate his pupil and in fact even attempted to assassinate him! Many years later, however, Yadava recognized Ramanuja's greatness, repented, and became his loyal follower.

Ramanuja married in his youth, but he was not happy in his marriage, for in his heart he longed for the time when he might devote himself uninterruptedly to life of worship and meditation. Hence he renounced all worldly ties, took monastic vows and set out to other town (Srirangam) where great sage Yamuna wanted him to live. Ramanujacharya became extremely popular and many spiritual aspirants gathered around him. Here he accepted Goshti Purna as his Guru who initiated him with the sacred Mantra about which we have mentioned in the beginning of the article.

Later Ramanujacharya traveled all over India giving lectures and sermons, engaging in debates and discussions, and thus spreading his interpretation of the Vedas, Upanishads, Brahma Sutras, and the Gita. He wrote commentaries on Brahma Sutras and the Gita along with other original treatises, which advocated his philosophy of devotion to God and His creatures as the highest ideal of human life. It states that the individual soul and insentient matter are distinct from Brahman, but Brahman is the basis of their existence and reality. Ramanujacharya took Maha-Samadhi in the year 1137, at the ripe and fruitful age of 120 years. He is regarded as the greatest saint and philosopher even today.

Ramanujacharya maintained that the wisdom of the Shrutis points to the fact that Shiva and Jiva (Universal Soul (God) and the individual soul) are not same, although they are not separate from each other. While universe is the body of Brahman, He is the Soul and controlling Power of the universe. Brahman is not only the material and efficient cause of the universe; He has in fact become this universe of multiple names and forms. God has become all, even though remaining separate from His creation. It is not illusion or Maya. The God is seen as having all the benevolent qualities (Grace, Compassion, bestowing blessings etc.) and also the power to create, maintain, and destroy the creation. The highest ideal, and the final goal of human endeavor, is to love and worship God as our own, and completely surrender oneself to Him. Thus, Ramanuja's philosophy is called Advaita nondualism with qualification – as it accepts the plurality both of matter and of souls.

Vishishtha Advaita or qualified monism of Ramanuja is a philosophy of love and devotion; we can say he propounded Bhakti Yoga as the path to reach the Truth. Therefore it gives a synthetic view of the spiritual experiences of God or Brahman. Heavily depending upon theory of Karma, this philosophy applies the law of cause and effect to moral experiences. It brings to light the inner working of righteousness of God and affirms the impossibility of cruelty and bias in Divine nature. As you sow, so would you reap! This law applies to explain suffering for many and comfort for others. But the Grace of God, the most benevolent being, transfigures the rigorous law of karma and thus His grace or 'kripa' becomes the ruling principle of religion. Thus Ramanuja added concepts of devotion, worship, and faith as new dimensions to Vedanta. Ramanuja does not accept the impersonal and 'attribute-less' Brahman of Shankara, but rather an eternal personal Brahman, the repository of all blessed qualities.

Qualified non-dualists believe that God is the cause and the universe its effect, but as the effect can't be different from the cause, God is immanent in whole universe. Like the spider, God projects the whole universe from within Himself and therefore can withdraw it in Himself. Similarly, God can reach anywhere, as the spider reaches anywhere in the web. As from the blazing fire, fly millions of sparks of the same nature; even so from this Infinite Being -God- these souls have come. Instead of Maya, here we can say, that Ramanujacharya posits creative Power or Shakti of God. The main theme is that it is Brahman Itself who has become this whole universe. Thus Ramanuja accepts the reality of cosmos/universe/world as the manifestation of Brahman, differing here with Maya theory of Shankara. Here it must be made clear that Shankaracharya did not reject the manifest world as non-existent, but he called it 'relatively real' and not absolutely real. This concept is based on the differing definitions of knowledge given by Shankara and Ramanuja. As Swami Prabhavananda says in the book, The Spiritual Heritage of India:

Shankaracharya discusses the question of reality of individual soul, this world, and Ishwara from this point of view, and labels them as illusory. He introduces the concept of primordial Ignorance – avidya – that deludes the human being in seeing the multifarious world when there is none! Final Liberation comes when this knowledge of unity of individual soul and eternal Soul is established through discrimination and dawning of universal intuition, transcendental oneness with Knowledge. Shankara is strong proponent of Jnana Yoga. The difference also alludes to one of the controversial aspects of interpretation of scriptures as far as relation between karma and knowledge is concerned. For Acharya Shankara the Highest Knowledge and the karma are antithetical to one another, while others, like Ramanujacharya and Vallabhacharya appear to disagree with him. Shankaracharya insists that the knower of Brahman, Brahmajnani, is free from all karma, both in their aspects of the effect on and the necessity for the realized soul.

"Ramanuja, on the other hand, does not take into consideration knowledge that is self-luminous and absolute. Knowledge, he declares, is always relative, and in it there is always a distinction between subject and object. In short, Ramanuja does not admit nirvikalpa samadhi, the unitary consciousness, the experience of the Self as one with Brahman."

For Ramanuja savikalpa samadhi is the highest transcendental experience that the Jiva can have. His Vedanta also emphasizes the pre-requisites such as –

1. Approaching the Guru with due humility, who is established in the Knowledge of Brahman, and learning from him that vidya,

2. Giving up all attachments to this world and the next, and

3. Grace of the Lord to attain to the transcendental knowledge, in addition to the scriptural studies and sadhana.