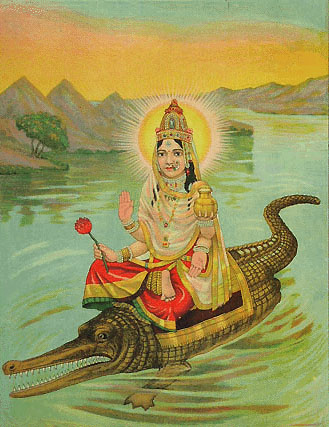 Gangapujan Dashahara or Dussehra is the "appearance day" or day that marks the descent of Mother Ganges – Ganga Ma. Throughout India this festival lasts ten days beginning on the Amavasya (dark moon night) and going through to the dasami tithi (tenth phase of the Moon, the day before Pandava Nirjal Ekadasi). The Ganga Sagara Mela festival is celebrated at the confluence of the Ganges and the Bay of Bengal.

Festivals connected with rivers are essentially bathing festivals. Ganga Dussehra is celebrated on the tenth day of Jyeshtha. River Ganga is worshipped as a mother as well as a Goddess, particularly by people of Uttara Pradesh, Bihar, and Bengal through which the river flows. On this day, if a devotee is unable to visit and bathe in the river Ganga, then Ganga jal (water) kept in most Hindu homes is used for purification. A bath in the river is said to purify the bather of all sins. The Ganga is revered all over India even in places far from its course.

Initially, river Ganga flowed in the heavens. She was brought down to earth by the severe penances of the sage Bhagiratha and that is why she is also called Bhagirathi. According to the story, of the descent of the Ganga, once a number of demons were harassing the hermits by disturbing them in their ascetic duties. During the day, they would be chased into the ocean. But in the darkness of the night, they would emerge from the ocean and start harassing the hermits again. In desperation the hermits appealed to Rishi Agastya. Agastya, known for his gastronomic powers, drank all the water of the ocean. Though this was done in good faith, it resulted in depriving the world of the water needed for sustenance and the earth became parched and dry. Bhagiratha brought this drought to and end.

According to the legend, King Sagara of the Ikshvaku dynasty ruling at Ayodhya in Uttar Pradesh had two queens, Keshani and Sumati, but neither had a child. Sagara performed severe austerities before his wives could produce sons. But whereas Keshani gave birth to a son called Asmajas, Sumati bore 60,000 sons. Sagara performed the Ashwamedha sacrifice to declare his suzerainty over the neighbouring kingdoms. According to the prevalent custom, the sacrificial horse was let loose and allowed to wander into the neighbouring kingdoms. If the horse was caught, a battle ensued and the outcome decided the winner. The 60,000 sons of Sagara were following the horse when they saw him enter a cavern where sage Kapila was meditating. Not seeing the horse in the cavern, they presumed that Kapila had captured it.

They did not kill Kapila as he was a sage but they started disturbing his meditations. Annoyed at being disturbed, Kapila with a curse burnt the 60,000 sons of Sagara. Time passed and later Bhagiratha, the great grandson of Sagara, chanced to come across the bones of his dead ancestors. He wanted to perform the shraddha of his ancestors but there was no water available for the ceremony. Agastya having drunk all the waters of the ocean, the country was passing through a severe drought. Bhagiratha prayed to Brahma, the Creator, to end the drought. Brahma asked him to pray to Vishnu, the Preserver, to allow the heavenly Ganga, issuing from His big toe, to come down to earth. Vishnu when prayed to by Bhagiratha agreed, but asked him to request Shiva, the third member of the Hindu trinity of Gods, to allow the torrential rain to fall on his head before it came to the earth as the river was very forceful and if she were allowed to come down unchecked, her fall would split the earth. Shiva agreed to take the gigantic weight of the cascading Ganga on the matted hair piled high on his head. This ensnared and delayed the progress of the river which, in meandering through the labyrinth of his hair, lost its force and then gently descended to the Himalayas from whence it flowed to the plains bestowing its waters on the parched earth. And that is why the anthropomorphic image of Ganga is shown in the matted hair of Shiva who is also called Gangadhara. Being born in the Himalayas, Ganga is considered the elder sister of Parvati, who is also a daughter of the Himalayas.

According to the Agni Purana and Padma Purana, the Ganga descended to the earth on Ganga Dussehra day and a bath in the holy river on this day is said to purify one of all sins. To die on the banks of the Ganga is considered most auspicious. If that is not possible, then the immersion of the ashes after cremation in the river Ganga is a must, as it then releases one from the cycles of birth and re-birth. the seven ways of worshipping the Ganga are: by calling out her name, 'Oh Ganga'; having darshan of her; by touching her waters; by worshipping and bathing; by standing in the waters of the river; and by carrying clay dug out of the river. Ganga in her anthropomorphic form is shown as a beautiful young woman standing on a crocodile and holding a waterpot in her hands. Her image, with that of the Goddess Yamuna, another sacred river deity, is often depicted on the doors of temples and palaces. In Gujarat, there is a legend according to which Ganga came down to the earth on Rishi Panchami, the fifth day of Bhadra (September) at Tarnetar. There is a sacred tank where people congregate for a holy bath on that day.