Q. Why are loving, truthful gurus so rare, and foolish gurus so abundant?

A. Perhaps for the same reason that sincere, loving disciples are rare and foolish ones are abundant. Both need to connect with one another. Otherwise real love, bhava, is very rare (sudurlabha). Love involves seeing God everywhere and Sri Krishna says in Bhagavad Gita that to see in this way–vasudeva sarvam iti–is to be a mahatma, a great soul, and this is very rare, sa mahatma sudurlabha.

Sri Rupa Goswami also explains in his Bhakti-rasamrta-sindhu that love (bhava) is rare. Again, he uses the word sudurlabha, very rare. It is very rare because one cannot attain it by any sadhana other than bhakti. Mixing bhakti with other sadhanas is not recommended because this will negatively affect one's ability to concentrate on the sadhana of bhakti, and only such single-mindedness can bring one to attachment (asakti) for Krishna, without which bhava will not descend. Furthermore, even after attaining asakti, Krishna does not bestow bhava for some time.

As Srimad Bhagavatam states, muktim dadati karhicit na bhakti-yogam dadati: while Krishna gives liberation (mukti) easily, he tends to withhold bhakti proper (bhava/love). In other words, it is bestowed only to those who attain asakti and even then not quickly after attaining such spiritual attachment, which is characterized by absence of interest in anything else. However, it is not that Krishna does not want to give bhava and prema by which he is controlled. Indeed, he takes great pleasure in being controlled by his devotees. In fact, Vrajendra-nandana Krishna refers to that form of the Godhead that is controlled by his devotees, the Purna-brahma becoming the friend of his devotees by the force of affection, yan mitram paramanandam purnabrahma sanatanam. To be controlled by his devotee's love is the most joyful state of the Godhead. Why then does he not give bhava and prema more readily? He wants to give it to all of his devotees, but they themselves must desperately desire it. If they want anything else, he withholds it.

There may be many gurus without real love, but if you can find only one that has it and he or she accepts you, your life will be successful to the extent that you follow in the wake of such a sat-guru's love of God.

Q. I have a question about attraction for great Vaisnavas other than one's own guru. In some organizations this seems to have become a problem. What to do about it?

A. One should not be whimsical, jumping around from guru to guru, but all considered, a devotee has every right to accept a siksa guru other than his or her diksa guru. Our initiating gurus do not own us. They come into our lives to help us grow spiritually. It is not uncommon for a devotee to be initiated by one guru and later develop an attraction to the siksa and example of another. In fact, the scriptures are full of such cases. Therefore, with all respect for our diksa guru, we should take siksa from the guru who inspires us the most. The idea here is to develop love of Krishna. Take all the help you can get. 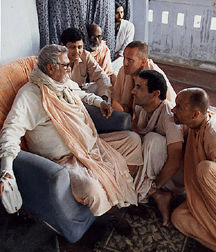 Q. I heard that when you were a member of The International Society for Krishna Consciousness (Iskcon) you were nominated to be an initiating guru but were rejected because you took guidance from Srila Sridhara Maharaja. Is this true? If so, will you explain some of the history behind this?

A. I was initiated by A. C. Bhaktivedanta Swami Prabhupada in 1972, took sannyasa from him in 1975, and was present with him shortly before his departure in 1977. During that period, Srila Prabhupada said that his students could receive further instruction from his Godbrother Srila B. R. Sridhara Deva Goswami. I was at the feet of Srila Prabhupada when he spoke these prophetic words. However, it was not until several years later in the midst of the confusion that followed Srila Prabhupada's departure that these words blossomed into the directive that would deeply affect the course of my life.

Initially the governing body commission of Iskcon (the GBC) pursued and welcomed the advice of Srila Sridhara Maharaja, but after some Iskcon members had accepted him as their siksa guru, the GBC began criticizing him and finally officially prohibited association with him. I first read Srila Sridhara Maharaja's words when Ramesvara Maharaja asked me to read Sri Guru and His Grace and tell him what was philosophically wrong with the book. I found nothing wrong; indeed, I felt I had come into contact with the same spiritual substance that I had found in Srila Prabhupada's words. Having come to realize the true spiritual stature of Pujyapada Sridhara Deva Goswami, I contacted the leading devotees who had been forced to leave Iskcon because of their taking shelter of him. In consultation with these devotees, I decided that it would be best for me to try to continue my service in Iskcon and be a voice of reason and sastra over the emotion and religious fanaticism that were so prevalent at that time.

As deviations of the original eleven gurus became apparent, increasing numbers of Srila Prabhupada's disciples became absorbed with trying to figure out how to set Iskcon back on track. My own conviction was that the detached, objective, and highly spiritual insight of Pujyapada Sridhara Maharaja was vital to steering Iskcon in the direction that Srila Prabhupada envisioned it should go–and it was increasingly apparent that the gurus Srila Prabhupada appointed were floundering their ability to realize this direction, as was the GBC. 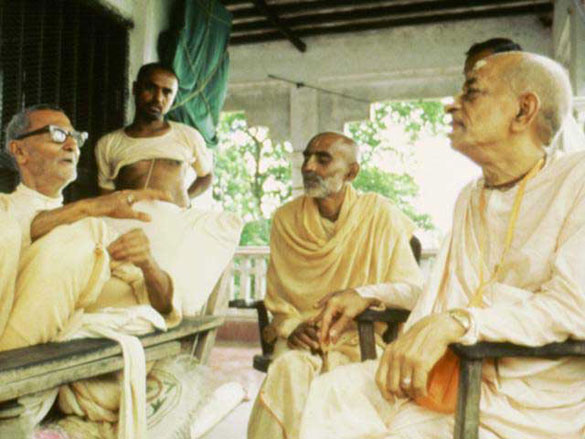 My coming under the influence of Srila Sridhara Maharaja happened to coincide with pressure that Iskcon members were putting on the GBC to increase the number of gurus in the society. Many devotees believed that this would help mitigate the abuse being perpetrated by the original eleven gurus who had assumed power in Iskcon after the disappearance of Srila Prabhupada. Ironically, Srila Sridhara Maharaja had first suggested this idea. He said that the GBC should increase the number of gurus–not lavishly but extending it to senior devotees who were seen to be qualified. In his opinion, doing so would encourage devotees by creating what he referred to as "a fair field for preaching." After all, Iskcon leading members were awakening people's faith in Krishna only to have one of the eleven gurus fly in and initiate the new converts, and then in many cases turn these new devotees against the preachers who had initially inspired them. Needless to say, these were troubled times for Iskcon and many disciples of Srila Prabhupada felt extremely oppressed.

In this difficult transitional period, a GBC member who was also one of Iskcon's eleven initiating gurus approached me about this issue. He admitted that the organization's policy needed reform and supported the proposal that the GBC now authorize other senior members of Iskcon to also become diksa gurus and initiate disciples. In this spirit he submitted my name to the GBC as a devotee (a non-GBC member) that he felt was qualified to initiate in Iskcon. He did so even though he knew my appreciation for the siksa of Srila Sridhara Maharaja. Although I agreed with him that the society's policy needed reform, I also made it clear that I didn't see increasing the number of gurus to be a comprehensive solution to the problems Iskcon faced.

The GBC approached me in 1985 about becoming an initiating guru in the organization. Knowing that I had affinity for Srila Sridhara Maharaja, the only question they asked me was why I was interested in him. Along with the obvious spiritual reasons, I replied that if I left Iskcon I did not feel that any of them cared enough about me to come after me to bring me back, but that Srila Sridhara Maharaja upon learning that a senior sannyasi had left the mission would undoubtedly send someone for me. That said, the GBC ruled that I was not qualified to initiate in their society.

After this ruling in March of 1985, I remained within Iskcon until the famous meeting in New Vrindavana took place–a meeting intended to reform Iskcon that was well attended by Srila Prabhupada's disciples. The two prominent positions that devotees took at the meeting were to support the current eleven gurus or to decrease the power and prominence of the gurus. One side wanted to engage in lavish worship of questionable gurus, while the other side proposed what could be called a covert ritvik system, which all but did away with successor acaryas altogether. I saw both these stances as problematic, but I was not allowed to speak because of my affinity for Pujyapada Sridhara Maharaja. 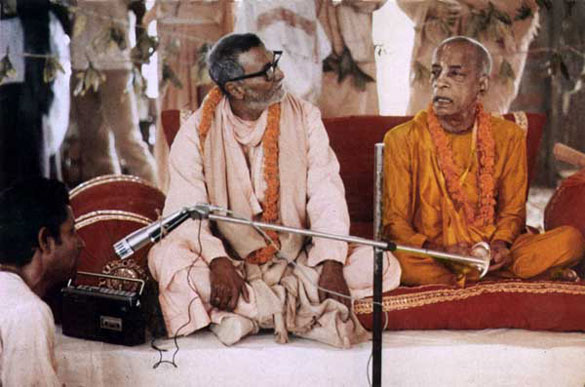 At this point I realized that I could no longer be a voice for reform within Iskcon and that its policy of not allowing its members to take siksa from Srila Sridhara Maharaja was not going to change. Listening to the opinions voiced in that meeting, it seemed to me that material solutions were taking the upper hand over spiritual ones, and I felt discouraged by what I felt to be an overwhelmingly shallow understanding of Krishna consciousness and Srila Prabhupada's desires. I had the strong conviction that despite the fact that there were sincere devotees within Iskcon, the institution as a whole had deviated from the desires of Srila Prabhupada and was not living up to his expectations.

Having been essentially barred from preaching in Iskcon, I felt that my ability to change the course of Iskcon's misguided trajectory was greatly hampered within the institution, and further, I did not want to be in any way connected with the serious deviations that were taking place. History has shown that significant change comes more readily from committed individuals, not organizations or governments, and certainly not committees. Further, as Gandhi said, you should be the change you want to see. Mutely following leaders who had proven themselves unworthy of respect was not my idea of progressive Krishna consciousness. Thus I decided with much regret that I could better pursue the ideal I had imbibed from Srila Prabhupada outside of Iskcon. Indeed, if I were to have a voice at all, it would have to be from outside of corporate Iskcon.

Thus in October/November of 1985, I went to Nadiya to seek the blessing of Pujyapada Sridhara Maharaja, knowing that leaving Iskcon and having a desire to help it were not mutually exclusive. When I asked Srila Sridhara Maharaja for some service, he advised me, "Swami Maharaja (Prabhupada) has taught you everything. Now go and start something yourself and I will be in the background to help you." This is what I did, and by the grace of Sri Guru and the Vaisnavas, I am happy and my efforts have been met with some success.

It should be clear from Srila Sridhara Maharaja's instruction to me that he wanted to see Prabhupada's disciples flourish in leadership positions and to serve his mission as acaryas. He personally wanted to remain in the background and assist Prabhupada's disciples in being all that Prabhupada wanted them to be. He had no desire to be the acarya of Iskcon after Prabhupada's departure. Despite being offended repeatedly by members of Iskcon, he never changed his position on this. He initiated disciples only when they could not develop faith in others who were initiating with his inspiration. He never presented himself as the acarya or successor of Srila Prabhupada, but it is clear from the historical record that Srila Prabhupada had more faith in his ability to guide his students than he did in anyone else. And for good reason. As I stated above, Srila Sridhara Maharaja dutifully endeavored to assist Prabhupada's mission in realizing its founder's hopes for his students: to grow and become spiritually realized leaders for Iskcon and the world at large.