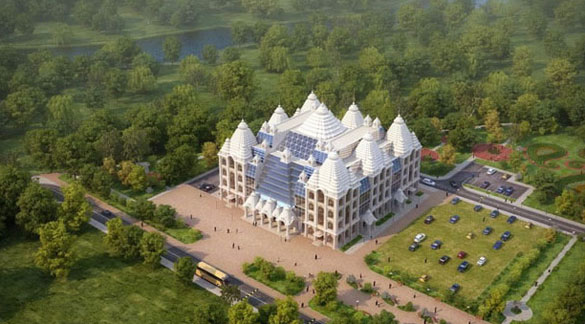 Russian authorities have finally allocated land for the construction of a Krishna temple in a northern suburb of Moscow, after many years of petitioning from the ISKCON and Hindu communities.

According to the agreement, ISKCON is to finalise the project and obtain permission for construction within the year 2011. Construction is to begin by December 31st 2012.

Moscow devotees first applied for permission to build a Vedic Temple and Cultural Center in the capital back in 1991, which former Mayor Yury Luzhkov approved and allotted land for in 1994.

“But although the project passed all the necessary endorsements, Mayor Luzhkov refused to sign the document, without giving any explanation,” says ISKCON Moscow's Communications Director Yadunandana Dasa.

Over the next decade, devotees executed many charity activities from their small temple near the Begovaya metro station, organizing programs for providing hot nutritious meals to socially unprotected Muscovites, victims of conflicts in Chechnya, Abkhazia, Ingushetia and Dagestan, and victims of the Sakhalin earthquake. Alongside their efforts they continued to apply for building a permanent major temple in Moscow.

But although the Moscow Government granted permission several times, they would always go on to cancel or delay the project. At one point, the Begovaya temple was in danger of being demolished to make way for “reconstruction,” and only numerous protests and interference from the Government of India could save it.

Some representatives of the Russian Orthodox Church as well as the “anti-cult movement,” led by Alexander Dvorkin, both raised similar objections to the building of a major Hindu Temple in Moscow. They said the worship of Krishna was “not the native faith,” claimed that its goal was to “enslave the consciousness of the Russian people” and dubbed ISKCON a “dangerous totalitarian sect.”

On the positive side, Russian devotees managed to attract the attention of the Indian people and Government to their mission.

“We also managed to preserve the enthusiasm of the devotees, and even to enhance the level of approval of ISKCON in Russia as an authorized religious, cultural, and charitable movement,” says President of the Center of Societies for Krishna Consciousness in Russia, Bhakti Vijnana Gosvami.

But by 2004, after many delays and broken agreements, the old Moscow temple near the Begovaya metro station was demolished to make way for reconstruction, and devotees had to relocate to temporary facilities on land given by the government near the Dynamo metro station.

Soon after, the government took back even the land they had given, and the devotees were left with nothing.

The following years were fraught with difficulty, as managers of ISKCON Moscow struggled to deal with the government as well as to maintain enthusiasm amongst the increasingly discouraged devotees.

Then, for the seven months leading up to this year's victory, the entire temple project was suspended.

“On the pretext that all the land in Moscow is supposed to be given through auction, the Control Department of the Moscow government rejected our application several times, even though all other departments including the Legal Department and the Land Department had approved it,” says President of the Center of Societies for Krishna Consciousness in Russia, Bhakti Vijnana Swami.

At last, Mayor Luzhkov was removed from office by Russian President Dmitry Medvedev on September 28th 2010. And on October 20th , acting Mayor Vladimir Resin, with the approval of new Mayor Sergey Sobyanin, signed the order allocating the 5-acre plot for the construction of the temple.

Helping the decision to be made were former State Secretary of Russia Mr. Gennady Burbulis, the Indian ambassador to Russia Mr. Prabhata Shukla, and Delhi Chief-Minister Mrs. Sheila Dixit.

“The issue of this Order is evidence of the Moscow Government's new positive policy towards religious organizations,” says Yadunandana Dasa.

Indeed, experts note that Russia's foreign policy has taken a sharp turn. The Moscow government is trying to create a positive image more than ever before because of the upcoming 2012 Presidential elections, and has had to close all previously frozen projects urgently in lieu of the new global business partnership with India and China.

Moscow devotees say that despite all previous set-backs, this is now the point of no return.

“The work ahead of us is purely technical,” says Bhakti Vijnana Swami. “The most difficult political decisions have now been made. In the meantime, we have our design and architectural work approved by the Architectural Department, so it means that in a few months we should be able to get permission to start the construction.”

A report earlier this year from Moscow devotees said that the new temple would have a total area of 12,300 square meters, and described its design as “combining modern technologies and styles with classic Indian temple arches and domes.” It also stated that the building would include a spacious temple room for worship, accommodation for devotees and pilgrims, a center for social programs such as Food For Life, an auditorium, and an Ayurvedic hospital, although it is not known whether these plans will remain in the final design. The construction itself is expected to be done in several stages over a period of many years.

“The devotees are so happy that finally, there will be a beautiful temple of Krishna in Moscow,” Yadunandana says. “But they understand that there will be more difficulties to surmount in the future—maintaining a project nicely is always more difficult than starting it.”

“So,” Bhakti Vijnana Swami adds, “We still depend on the blessings, good wishes and support of devotees all over the world. May this dependence on the mercy of Vaishnavas and sincere followers of His Divine Grace Srila Prabhupada be the bedrock foundation of the future temple in Moscow.”