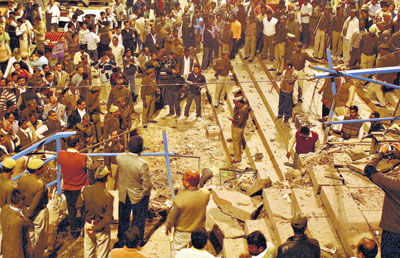 The Varanasi blast, which killed one child and injured more than 25 others, was planned with the intent of inflicting a small cut on the country's arm and watching it bleed, intelligence officers suspect.

The blast, they say, proves the accuracy of David Coleman Headley's admission to the FBI last year that Pakistan is going ahead with the Karachi Project a plan designed to counter India's military and economic might by 'bleeding the country with a 1,000 cuts'.

"A thousand cuts means carrying out small blasts across the country instead of a major attack like 26/11. Terror groups in Pakistan are under tremendous international pressure after the Mumbai attacks and thus, they now prefer small attacks using as few men as possible," said an intelligence officer.

"The modus operandi involves the use of Indian youth and D-Company affiliates to carry out terror strikes using locally available bomb material. This way, they can spread terror in the Indian heartland without raising suspicions of Pakistan's involvement," he added.

Intelligence officials say Pakistan has been using small militant groups as an important part of its strategic attacks to counter India's advantages. Instead of another 26/11-like attack, which could lead to war between India and Pakistan, small-scale blasts are effective in slowing down the economy.

They say that although the explosives used are of low intensity, they are sufficient to spread terror across the country.