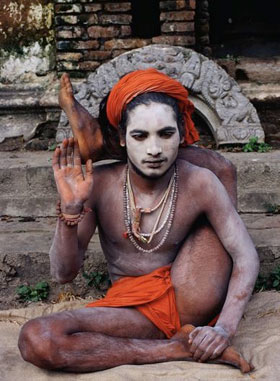 Yoga is practiced by about 15 million people in the United States, for reasons almost as numerous — from the physical benefits mapped in brain scans to the less tangible rewards that New Age journals call spiritual centering. Religion, for the most part, has nothing to do with it.

But a group of Indian-Americans has ignited a surprisingly fierce debate in the gentle world of yoga by mounting a campaign to acquaint Westerners with the faith that it says underlies every single yoga style followed in gyms, ashrams and spas: Hinduism.

The campaign, labeled “Take Back Yoga,” does not ask yoga devotees to become Hindu, or instructors to teach more about Hinduism. The small but increasingly influential group behind it, the Hindu American Foundation, suggests only that people become more aware of yoga’s debt to the faith’s ancient traditions.

That suggestion, modest though it may seem, has drawn a flurry of strong reactions from figures far apart on the religious spectrum. Dr. Deepak Chopra, the New Age writer, has dismissed the campaign as a jumble of faulty history and Hindu nationalism. R. Albert Mohler Jr., president of the Southern Baptist Theological Seminary, has said he agrees that yoga is Hindu — and cited that as evidence that the practice imperiled the souls of Christians who engage in it.

The question at the core of the debate — who owns yoga? — has become an enduring topic of chatter in yoga Web forums, Hindu American newspapers and journals catering to the many consumers of what is now a multibillion-dollar yoga industry.

In June, it even prompted the Indian government to begin making digital copies of ancient drawings showing the provenance of more than 4,000 yoga poses, to discourage further claims by entrepreneurs like Bikram Choudhury, an Indian-born yoga instructor to the stars who is based in Los Angeles. Mr. Choudhury nettled Indian officials in 2007 when he copyrighted his personal style of 26 yoga poses as “Bikram Yoga.”

Organizers of the Take Back Yoga effort point out that the philosophy of yoga was first described in Hinduism’s seminal texts and remains at the core of Hindu teaching. Yet, because the religion has been stereotyped in the West as a polytheistic faith of “castes, cows and curry,” they say, most Americans prefer to see yoga as the legacy of a more timeless, spiritual “Indian wisdom.”

“In a way,” said Dr. Aseem Shukla, the foundation’s co-founder, “our issue is that yoga has thrived, but Hinduism has lost control of the brand.”

For many practitioners, including Debbie Desmond, 27, a yoga instructor in Williamsburg, Brooklyn, the talk of branding and ownership is bewildering.

“Nobody owns yoga,” she said, sitting cross-legged in her studio, Namaste Yoga, and tilting her head as if the notion sketched an impossible yoga position she had never seen. “Yoga is not a religion. It is a way of life, a method of becoming. We were taught that the roots of yoga go back further than Hinduism itself.”

Like Dr. Chopra and some religious historians, Ms. Desmond believes that yoga originated in the Vedic culture of Indo-Europeans who settled in India in the third millennium B.C., long before the tradition now called Hinduism emerged. Other historians trace the first written description of yoga to the Bhagavad Gita, the sacred Hindu scripture believed to have been written between the fifth and second centuries B.C.

The effort to “take back” yoga began quietly enough, with a scholarly essay posted in January on the Web site of the Hindu American Foundation, a Minneapolis-based group that promotes human rights for Hindu minorities worldwide. The essay lamented a perceived snub in modern yoga culture, saying that yoga magazines and studios had assiduously decoupled the practice “from the Hinduism that gave forth this immense contribution to humanity.”

Dr. Shukla put a sharper point on his case a few months later in a column on the On Faith blog of The Washington Post. Hinduism, he wrote, had become a victim of “overt intellectual property theft,” made possible by generations of Hindu yoga teachers who had “offered up a religion’s spiritual wealth at the altar of crass commercialism.”

That drew the attention of Dr. Chopra, an Indian-American who has done much to popularize Indian traditions like alternative medicine and yoga. He posted a reply saying that Hinduism was too “tribal” and “self-enclosed” to claim ownership of yoga.

The fight went viral — or as viral as things can get in a narrow Web corridor frequented by yoga enthusiasts, Hindu Americans and religion scholars.

Loriliai Biernacki, a professor of Indian religions at the University of Colorado, said the debate had raised important issues about a spectrum of Hindu concepts permeating American culture, including meditation, belief in karma and reincarnation, and even cremation.

“All these ideas are Hindu in origin, and they are spreading,” she said. “But they are doing it in a way that leaves behind the proper name, the box that classifies them as ‘Hinduism.’ ”

The debate has also secured the standing of the Hindu American Foundation as the pre-eminent voice for the country’s two million Hindus, said Diana L. Eck, a professor of comparative religion and Indian studies at Harvard. Other groups represent Indian-Americans’ interests in business and politics, but the foundation has emerged as “the first major national advocacy group looking at Hindu identity,” she said.

Dr. Shukla said reaction to the yoga campaign had far exceeded his expectations.

“We started this, really, for our kids,” said Dr. Shukla, a urologist and a second-generation Indian-American. “When our kids go to school and say they are Hindu, nobody says, ‘Oh, yeah, Hindus gave the world yoga.’ They say, ‘What caste are you?’ Or ‘Do you pray to a monkey god?’ Because that’s all Americans know about Hinduism.”

With its tiny budget, the foundation has pressed its campaign largely by generating buzz through letters and Web postings to academic journals and yoga magazines. The September issue of Yoga Journal, which has the largest circulation in the field, alluded to the campaign, if fleetingly, in an article calling yoga’s “true history a mystery.”

The effort has been received most favorably by Indian-American community leaders like Dr. Uma V. Mysorekar, the president of the Hindu Temple Society of North America, in Flushing, Queens, which helps groups across the country build temples.

A naturalized immigrant, she said Take Back Yoga represented a coming-of-age for Indians in the United States. “My generation was too busy establishing itself in business and the professions,” she said. “Now, the second and third generation is looking around and finding its voice, saying, ‘Our civilization has made contributions to the world, and these should be acknowledged.’ ”

In the basement of the society’s Ganesha Temple, an hourlong yoga class ended one recent Sunday morning with a long exhalation of the sacred syllable “om.” Via the lung power of 60 students, it sounded as deeply as a blast from the organ at St. Patrick’s Cathedral.

After the session, which began and concluded with Hindu prayers, many students said they were practicing Hindus and in complete sympathy with the yoga campaign.
Not all were, though. Shweta Parmar, 35, a community organizer and project director for a health and meditation group, said she had grown up in a Hindu household. “Yoga is part of the tradition I come from,” she said.

But is yoga specifically Hindu? She paused to ponder. “My parents are Hindu,” she said. But in matters of yoga, “I don’t use that term.”

Myths of the Asanas: The Ancient Origins of Yoga

The Beginning of Kali Yuga, 3102 BC (Evidences)