Should a turkey have attended dinner at the Krishna temple on Thursday, it would have been as an honored guest. All guests are welcome by Krishna devotees who celebrated the holiday with a vegetarian feast.

"We are giving thanks to Lord for giving us the opportunity to serve. We give thanks, not for material things, but for being able to serve," Vai said.

Before they sat down to eat, the group engaged in Kirtan, or chanting, in the Temple upstairs. Kirtan, the chanting of His Holy Names, engages all the senses. Vai explained Kirtan involves air, water, fire, ether or sound and earth.

Caru Das reminded the group that many people suffer for lack of subsistence in the world. But almost everyone in America suffers from a lack of significance or self-esteem. "Look at the rich and famous on the covers of supermarket tabloids," he said. You ask, how did they get so spectacularly messed up?" Because their life spectacularly lacks significance.

"It's about how much of a blessing you are to others." He finished by saying "Lets not think of Thanksgiving as being all about us."

The food for the banquet had been arrayed on the altar for Krishna's blessing. It was then carried to the buffet. When it is returned to the buffet, it is no longer bhog (physical food only) but is prasadam (blessed food). In that way, in addition to being filling, it has an uplifting effect on those who eat it. Vai explained, "we don't taste when we cook. We wait. We offer it to the Lord, then we feast."

Caru Das said this is the biggest banquet they've ever had at the Temple. The buffet was filled to overflowing with tofu, vegetarian dressing, nut loaf, vegetable curry, salads and savories, butternut squash soup, sweets, including vegetarian pumpkin pie and breads. Everyone ate and talked and occasionally avoided the large macaw working his way from chair to chair.

Caru Das had been a Krishna devotee for 12 years when he came across an ad for a 1,000 watt AM station in central Utah.

Caru Das and Vai purchased the radio station in 1982, broadcast the Hare Krishna message and held worship services there. The couple then built the log building in 1987 and moved worship services there. Construction on the temple began 1998 and Lotus Temple was opened in 2001. It is situated on an elevated 15-acre lot on State Road 198. The 50-foot tall temple was designed by Vai, and is modeled after Kusum Sarovar, a temple on a Lake of Flowers in India. It has a 25-foot main dome. 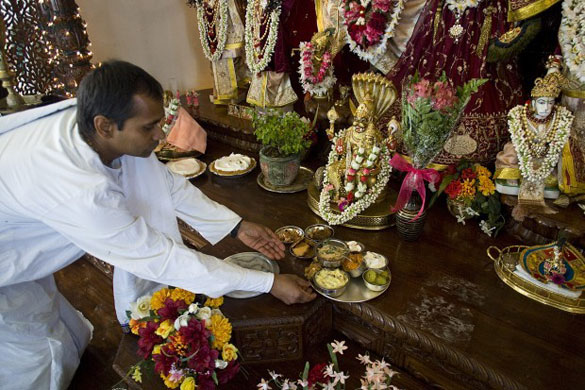