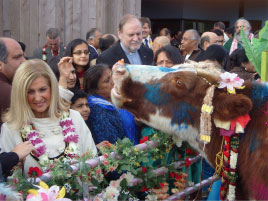 Praising Gokul farm for its excellence in the husbandry of cattle Mr Grieve said, “I am delighted to have been asked by the Bhaktivedanta Manor to be here to commemorate the opening of the New Gokul farm’s new facilities. These provide a sustainable sanctuary for cattle and a means whereby visitors can come and see for themselves the workings of a traditional farm where animals and nature are given the highest respect.”

Hailed as a blue-print for the future of farming, The Independent and the Daily Telegraph described the New Gokul project as being the “Hilton of farms”. The care received by the 44 cows and bulls is unparalleled. For example, relaxing music is played to the cows as they are hand-milked, and they are allowed to live their full natural life-span.

“This premium milk, presently used in many products available in our Temple shop, will offer visitors the chance to avoid buying from an industry which is based around slaughter and suffering, and instead buy from a fresh, new and compassionate alternative,” said Sita Rama das, Director of the Lotus Trust. The milk has been commercially branded Ahimsa Milk, meaning milk produced without harm to any living being.

“In Hindu culture cows are respected as representatives of the goddess of the earth, Mother Bhumi. Therefore it is the duty of every Hindu to be conscious of the kind of milk they are drinking,” added Bhaktivedanta Manor’s Temple President Srutidharma das, “they should at least buy organic milk which is free from GM cattle feed, routine antibiotic treatments and synthetic pesticides.”

The opening of the £2.5 million New Gokul project was performed by twenty saffron clad brahmins who chanted verse from the Vedic scriptures.

Recently inaugurated into the House of Lords, Lord Dolar Popat of Harrow said “This goshalla stands as a feat of accomplishment for the greater British Hindu community. The project demonstrates the community’s respect of the earth and those with whom we share it”.

New Gokul's main features are its oak build, ox power in the fields and treadmill, ox cart rides, hand milking and humane treatment of cows and the full viewing facility so that all visitors can see the working of the farm. Already the farm has a wide range of visitors, of which ten of thousands of school children and public visit the farm annually. 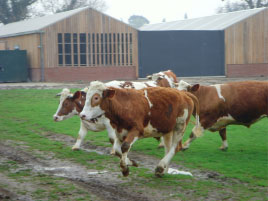 * 40 tonnes of milk per year
* Cows are hand-milked and sacred music played in the background
* Bullocks pull the plough and harrow and other farm equipment to cultivate the land without the use of tractors.
* This will achieve Bhaktivedanta Manor’s day to day needs of fresh milk
* 44 cows (20 bulls and 24 cows)
* Only 6 milking
* 1000 litres of milk a week are produced
* 8 staff attend the cows
* Milking time is 4.30am and 2pm everyday
* Cost per cow (in terms of sponsorship) is £351 per year
* £3.00 litre of milk: cost to produce
* We make our own panner, yoghurt an ghee (for the lamps and cooking)
* The cows require 105 acres of land (53 extra acres are rented)
* Favorite foods of the cows include cabbage, carrots and jagari (raw sugar cane)
* Cow are never put down
* 4 calves at the moment
* New Gokul farm cost £2.5 million
* When cows die a nice ceremony is conducted
* 8 acres of land are dedicated to the communities developing horticulture project.

Most farms in the UK will slaughter their cows for human or domestic animal consumption after about five years of their milking life. However, the Ahimsa campaign is looking to collaborate with farms to take care of their cows until they die naturally. A pilot scheme has been launched where people can purchase Ahimsa milk. (http://www.ahimsamilk.org)

* No slaughter of cows, calves or bulls
* Open grazing policy
* Protected herd for life – Pension scheme and hospice for non-productive cows and bulls

After consultation organisations such as the OMSCo (The Organic Milk Suppliers Cooperative), we chose to separate issues of organic and non-organic with high welfare standards, we felt it was better to just have a very clear succinct approach for the present. It may develop further in the future.

Naturally, the Manor goshalla goes well beyond the Standard by choosing to hand milk cows and afford much higher care.