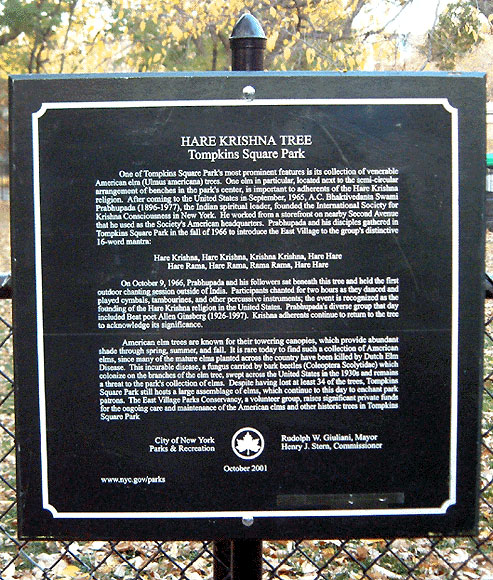 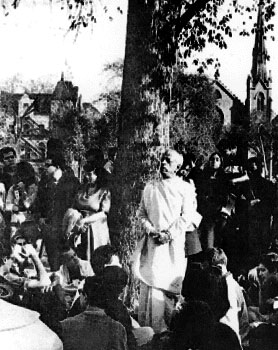 On November 18, 2001, Srila Prabhupada's Disappearance Day, a plaque was placed in Tompkins Square Park in honor of His Divine Grace, who brought the Hare Krishna Movement to the west 35 years before.

"One of Tompkins Square Park's most prominent features is its collection of venerable American elm (Ulmus americana) trees. One elm in particular, located next to the semi-circular arrangement of benches in the park's center, is important to adherents of the Hare Krishna religion. After coming to the United States in September, 1965, A.C. Bhaktivedanta Swami Prabhupada (1896-1977), the Indian spiritual leader, founded the International Society for Krishna Consciousness in New York. He worked from a storefront on nearby Second Avenue that he used as the Society's American headquarters. Prabhupada and his disciples gathered in Tompkins Square Park in the fall of 1966 to introduce the East Village to the group's distinctive 16-word mantra:

On October 9, 1966, Prabhupada and his followers sat beneath this tree and held the first outdoor chanting session outside of India. Participants chanted for two hours as they danced and played cymbals, tambourines, and other percussive instruments; the event is recognized as the founding of the Hare Krishna religion in the United States. Prabhupada's diverse group that day included Beat poet Allen Ginsberg (1926-1997). Krishna adherents continue to return to the tree to acknowledge its significance.

American elm trees are known for their towering canopies, which provide abundant shade through spring, summer, and fall. It is rare today to find such a collection of American elms, since many of the mature elms planted across the country have been killed by Dutch Elm Disease. This incurable disease, a fungus carried by bark beetles ( Coleoptera Scolytidae) which colonize on the branches of the elm tree, swept across the United States in the 1930s and remains a threat to the park's collection of elms. Despite having lost at least 34 of the trees, Tompkins Square Park still hosts a large assemblage of elms, which continue to this day to enchant park patrons. The East Village Parks Conservancy, a volunteer group, raises significant private funds for the ongoing care and maintenance of the American elms and other historic trees in Tompkins Square Park.