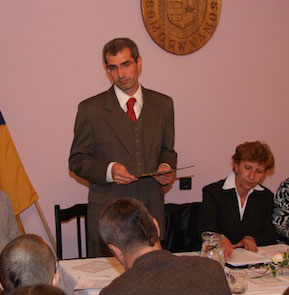 Since 1998—for the past three elections—one of the seven people on the Mayor’s council in the village of Somogyvamos in Hungary has been an ISKCON devotee.

This year, there will only be four people on the Mayor’s council, as well as the newly elected Mayor Mrs Marianna Dekanyne Karoly—and three of them will be devotees.

Krishna Valley, a sustainable community and one of ISKCON’s most successful rural projects, is situated within Somogyvamos. The tiny village, one of over three thousand such settlements in Hungary, is home to only 850 people. 150 of these are the inhabitants of Krishna Valley, while another fifty devotees live in the village itself.

“It was always natural that we played a part in the local government, since everyone understood that Krishna Valley was here to stay, and that we had a major role in developing the village,” says Radha Krishna Dasa, who became Deputy Mayor at the recent elections.

He explains that Somogyvamos is a very small village in a cul-de-sac, consisting of two churches, the mayor’s office, two pubs, two grocery stores, and around 300 houses. Before Krishna Valley, there were almost no jobs in the village, and many people had left to get work in the cities.

Since Krishna Valley’s establishment, however, the situation has improved. “We draw a lot of tourism, and have became the largest employers in the village, if not the area,” says Radha Krishna. “We employ people to maintain our botanic garden, farm and the different parks and attractions. Some devotees also brought businesses with them when they moved here, such as Tulasi Cosmetics and Yamuna Cosmetics.”

As Krishna Valley grew, so did the devotees’ involvement in their village. So it wasn’t a major surprise when three devotees joined the Mayor’s council during the elections on October 3rd, 2010: Radha Krishna das (Zoltan Hosszu), Partha das (Vilmos Pocze), and Radhakanta das (Attila Barsi).

“We were discussing the possibility of getting involved in developing Somogyvamos,” Radha Krishna says. “We first selected Partha Prabhu to run for office, as he was on the Mayor’s council two elections prior. Radha Kanta Prabhu we selected because he manages agriculture and construction at Krishna Valley, and because he is well-kown in the village as one of the bigger employers. And since I’m the director of the Eco Valley Foundation, and my main service is to establish sustainable communities and villages, I seemed a good choice too.”

These three set about making pamphlets describing who they were and what they would do for the village, and distributing them to every household.

Partha Dasa stated that he would develop the infrastructure in the village, including its waste water treatment system, its road system, and internet accessibility. He would also develop employment and a better working model. And he would work on introducing more renewable energies and helping the village to become more self-reliant.

Radhakanta Dasa, meanwhile, pledged to develop local agriculture and production, and to provide homes and opportunities for young families to settle down in the village.
Finally, Radha Krishna Dasa’s contribution would be to work for more job opportunities, developing tourism, developing local services, and attracting investments.

When the elections came, both devotees and villagers voted. As it happened, all three devotees were elected to the mayor’s council, with Radha Krishna Dasa as deputy mayor.

“The question arose, what is the role of the deputy mayor in such a small village?” he says. “Previously, it was just a formal position. But we explained to the mayor that we would like to have an active role, to put a lot of effort into developing the village.”

Radha Krishna Dasa, whose first day in office was October 27th, says he has plenty of hard work ahead of him. “More than fifty per cent of the local population is inactive, meaning they are either children, senior citizens, or unemployed,” he explains. “In the support system of the past, the unemployed received plenty of money to live off of from the government. Now that has changed, and they’re receiving only a small amount. But they are not used to working full-time, since they didn’t have to for so many years. So mobilizing people to work and to develop the village won’t be easy.”

Radha Krishna Dasa will also put Radhakanta and Partha’s efforts into motion, discussing with them how to develop areas such as tourism, settlement development and infrastructure. He will also communicate with the villagers—his office next to the Mayor’s will have set open hours.

Mayor Dekanyne Marianna Karoly herself—Somogyvamos’ deputy mayor for the past four years and principal of the elementary school in the village prior to that—is, of course, supportive of the devotees. Not everyone, however, shares her sentiment.

“As always, there are those villagers who really like us, and those who really do not like us,” Radha Krishna Dasa says honestly. “But they have all seen what we could achieve in seventeen years in Krishna Valley—turning a sheep run into the spiritual world. And many really hope that we can do something miraculous with their village too, and turn it into a paradise.”

Having seen much promised and little change in previous elections, however, the villagers are looking forward to seeing results, rather than just talk. And the devotees are determined to deliver.

“Given enough time, the village will definitely grow,” says Radha Krishna. “More devotees will be likely to move here from the cities, and to bring businesses with them. That will mean more jobs for the villagers, and a more liveable facility for devotees who would like to live in a peaceful settlement.”

Devotees hope their involvement in local government will continue to develop. “I’m sure we will continue to be involved in the future, but that would depend on how well we do for the next four years,” says Radha Krishna Dasa, who has re-organized his many other services so that he can spend half of his time at the mayor’s office. “So we’ll see.”