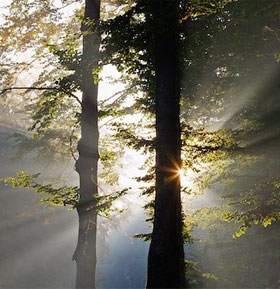 "Spiritual emotion, bhava, is constituted of Sri Krishna's internal energy, svarupa-sakti. Its awakening in the devotee's heart signals the first ray of the sun of prema, ecstatic love of God."

Q. Srila Prabhupada taught us to chant primarily the Hare Krishna maha-mantra during congregational chanting (sankirtana). However, from reading Caitanya Bhagavata, the biography of Sri Caitanya Mahaprabhu by Vrindavana Dasa Thakura, it appears that in sankirtana Mahaprabhu and his associates mainly chanted the mantra beginning with hari haraye namah krishna yadavaya namah. Therefore, my question is where in scripture is it stated that the Hare Krishna maha-mantra is to be chanted aloud congregationally? In his book Sri Krishna Caitanya, Dr. O. B. L. Kapoor raises this question but does not conclusively answer it. Do you have an answer?

A. Dr. Kapoor was influenced by Carana dasa Babaji, who raised this issue more than a hundred years ago. Basically the Babaji taught that the Hare Krishna maha-mantra was not to be chanted aloud in sankirtana, rather it was to be chanted meditatively on beads (japa), which entails keeping track of the number of mantras chanted. Previously, I commented on this issue as follows.

The Hare Krishna mantra is mentioned in Kali-santarana Upanisad as the best combination of God's names to be evoked in conjunction with the Kali-yuga dharma (kirtana). Thus speaks the sruti on kirtana of the Hare Krishna maha-mantra. So to insist that it can only be uttered as a dhyana-mantra and that it is not appropriate for kirtana seems to contradict the sruti. Furthermore, according to Rupa Goswami in his Prathama-Caitanyastaka 5, it was chanted loudly by Mahaprabhu, hare krsnety uccaih. The word "uccaih" means to utter loudly. As japa is an anga (limb) of dhyana (meditation), it is not to be uttered aloud, much less loudly. If while chanting on beads one does chant the mantra loudly, this japa is considered an anga of kirtana, not smaranam.

Thus it would appear that according to Rupa Goswami, Mahaprabhu chanted the Hare Krishna mantra in kirtana. The opposing side might say that Rupa Goswami's verse indicates that even though Mahaprabhu chanted loudly, he counted while doing so, hare krsnety uccaih sphurita-rasano nama-ganana-krta-granthi-sreni-subhaga-kati-sutrojjvala-karah. Thus they would concede that one could chant the Hare Krishna maha-mantra in kirtana provided that one counts the number of mantras. I think an unbiased third party would consider this a weak argument. Indeed, the rest of the sampradaya is not convinced by it.

Not only did our param guru Bhaktisiddhanta Saraswati Thakura engage his disciples in nagara sankirtana of the Hare Krishna maha mantra, all Gaudiya sects except for the followers of Carana dasa babaji do as well. That is not to say that other nama mantras were not also chanted in sankirtana or that they should not be chanted now. The fact that the Hare Krishna maha-mantra has become the default nama mantra for worldwide sankirtana speaks loudly to us about this practice. In other words, it is the opinion of the vast majority of Mahaprabhu's devotees that he intended that we chant the maha-mantra in sankirtana, and it is from his devotees more than anywhere else that we will know his intentions.

Q. Some say that while chanting japa one should strictly avoid all other thoughts and simply try to concentrate on the holy name of Krishna. Others say that we should allow thoughts of Krishna's pastimes to enter our mind when chanting japa. What is your opinion on this?

A. According to Srila Rupa Goswami our goal is to somehow or other fix our mind on Sri Krishna. If we are chanting with attention, our mind should flow naturally to thoughts of Krishna's form, qualities, and pastimes. This is desirable. Through nama smaranam (japa) or kirtana, eventually we will qualify ourselves for rupa smaranam, guna smaranam, and lila smaranam–meditation on Krishna's form, qualities, and pastimes, in that order. Krishna's rupa, guna, and lila are all within his name.

Q. I have a problem with long-term commitment. I'm enthusiastic when beginning an endeavor but rarely do I have enough determination to stick through to the end. Basically I do what makes me happy and quit when the taste for what I am doing declines. This has been the case with my chanting and devotional life as well. Do you have any words of wisdom for me?

A. If you love your spouse or children, do you abandon them when they don't reciprocate in a way that is pleasing to you? Are you in the relationship only for yourself? If so, then where is the love? Love is labor–a labor of love. Love is commitment, for better or for worse.

Sri Caitanya Mahaprabhu tells us that the culture of divine love, although spiritually fulfilling, may also be problematic. In his Siksastakam he writes that chanting the names of Krishna cleanses the mirror of the mind and extinguishes the forest fire of material life, but unfortunately he (Mahaprabhu) has no attraction for them. If Gaura, the golden avatar of chanting, says that he has no attraction for the holy name of Krishna then you should feel honored, even embarrassed that you have any taste for chanting at all. Therefore be encouraged knowing that even your fleeting attempts to chant Krishna nama are auspicious.

In his Siksastakam, Mahaprabhu goes on to say that true humility enables one to chant constantly. So cultivate humility through Vaisnava seva and continue chanting or trying to chant the holy name of Krishna regardless of your situation. In the absence of a taste for chanting, revert to philosophy and study Bhagavad-gita and the life of Caitanya Mahaprabhu (Caitanya-caritamrta). You'll find that Caitanya Mahaprabhu is so kind, so generous that it brings one to tears. His love for his devotees, his gentle dealings, his soft heart–one cannot find this anywhere in any other avatara. Patita pavana Gaura. There is no one like him anywhere in any world. "Go to him now. He calls you. You can't refuse."

Q. What is the difference between bhakti as a practice and bhakti as a goal (prema bhakti)?

A. Sri Jiva Goswami Prabhupada explains in his commentary of Rupa Goswami's treatise Bhakti-rasamrta-sindhu that although there are three types of bhakti, bhakti in practice (sadhana-bhakti), bhakti in ecstasy (bhava-bhakti), and bhakti in love of God (prema-bhakti), these three can be discussed as two: sadhana-bhakti and sadhya-bhakti. Sadhya bhakti is bhakti as the goal, as opposed to bhakti in practice. Because in bhava bhakti one experiences spiritual emotion in relation to Krishna, bhava bhakti is sometimes considered the sadhya, even though bhava-bhakti is not free from obstacles arising from aparadha and does not rise to the state of aesthetic rapture (rasa). Indeed, Sri Rupa's definition of sadhana bhakti includes the idea that it culminates in bhava, krti-sadhya bhavet sadhya-bhava sasadhanabhidha. Prema-bhakti and its developments of sneha, mana, pranaya, raga, anuraga, and maha-bhava are of course that much more the sadhya of sadhana-bhakti, being free from impurities and filled with rasananda. Thus sadhya-bhakti is distinguished from sadhana-bhakti by spiritual emotion.

However, it should not be thought that the bhava arising from sadhana is something that previously did not exist. No, the bhava that sadhana-bhakti gives rise to is eternal (nitya siddha krishna prema). It appears in due course in the heart of a devotee engaged in sadhana bhakti (sravanadi sudha citte karaye udaya). This occurs as the sadhaka first becomes attached to bhakti and detached from material desire (ruci) and subsequently develops attachment (asakti) to the object (Krishna) of his or her bhakti and enters into a life of spiritual emotion. This spiritual emotion, bhava, is constituted of Sri Krishna's internal energy, svarupa-sakti. Its awakening in the heart of the devotee signals the first ray of the sun of prema, ecstatic love of God.

A. According to the Srimad Bhagavatam, Mahabharata, and other sacred texts, we are now in Kali-yuga, the age of quarrel and hypocrisy. The yuga cycles for the most part speak to us of particular qualities of time in terms of how morally and spiritually conducive they are. While there may be a fair amount of spiritual interest in the world at this time, just how conducive our times are for spiritual pursuit is another thing. Yantra-vijnana, which can arguably be rendered into English as "technology," is considered inauspicious and peculiar to the Kali-yuga. In the least, modern technology with all of its advantages has not improved our spiritual lives.

However, it is also mentioned in the Srimad Bhagavatam that the Kali-yuga is auspicious because, despite its shortcomings, an easy means for attaining Krishna prema is readily available due to the advent of Sri Caitanya. Perhaps because of this some devotees speak of a "Prema-yuga." But you should keep in mind that prema is very rarely attained. While an easy means to attain it is at hand, few avail themselves to the path such that they will see the light of prema any time soon. It is an easy path; easy, that is, in comparison to other spiritual paths. It is an ego-effacing path to the extreme, and to dismantle one's material ego is to go only half the way to prema at best. So do not look for prema to awaken in the hearts of millions as a sign that you live in an auspicious time. Use your time well and apply yourself wholeheartedly to the teaching of Sri Caitanya now. Then perhaps in some distant lifetime you will attain your ideal. You should be prepared for that. This is how the devotees of Mahaprabhu think, mama janmani janmanisvare bhavatad bhaktir ahaituki tvayi: "I only ask for unalloyed devotion to Krishna, birth after birth."