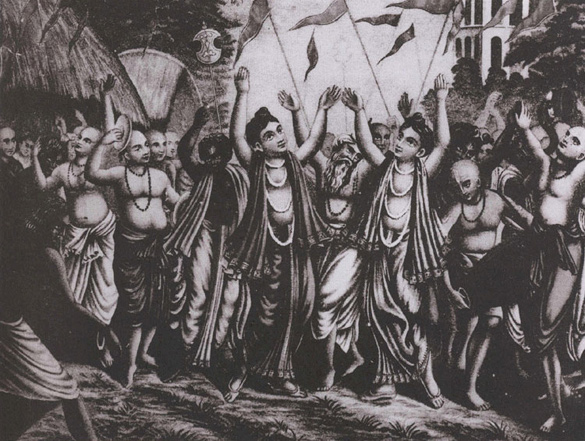 The Disappearance Day of Sri Murari Gupta is observed on October 22nd.

Murari Gupta took birth in a family of Ayurvedic physicians in the district of Sylhet.

Murari Gupta is a physician for the material disease. He was amongst the many associates of Mahaprabhu who appeared in Sylhet. (Chaitanya Bhagavat 1.2.35)

The names of his parents are unknown. He was somewhat older than Mahaprabhu. When his family moved from Sylhet to take up residence in Nabadwip, they lived in the same neighborhood as Sri Chaitanya, so Murari was Nimai’s companion in many of his childhood pastimes. It is also written in the Chaitanya Charitamrita that Murari observed Mahaprabhu’s childhood pastimes. His name is included in the Chaitanya Bhagavat’s list of associates who appeared prior to Mahaprabhu’s incarnation.

Hidden in Nabadwip, there were many who had previously taken birth at the Lord’s command. They included Sri Chandrasekhara, Jagadisa, Gopinath, Sriman, Murari, Sri Garuda and Ganga Das. (Chaitanya Bhagavat 1.2.98-99)

Along with Mahaprabhu, he was also a student at Ganga Das Pandit’s Öol. When the Lord was engaged in his pastimes of learning and study, he would often engage Murari in joking and mock debate. Murari Gupta was amazed at Mahaprabhu’s wonderful intelligence and just the touch of his hand would so immerse him in ecstasy that he was early convinced that he was no ordinary human being.

One day, the Lord was pleased with the explanation which Murari Gupta gave him, one which he was able to give through the Lord’s grace. He touched Murari with his hand and his entire body was filled with ecstasy. Murari Gupta thought that this person can in no way be an ordinary human being. Can an ordinary human attain such scholarship so quickly? And his touch brings such ecstatic pleasure! (Chaitanya Bhagavat 1.10.49)

The Vaishnava’s ornament is humility. Mahaprabhu would melt when he saw the humility of Murari Gupta.

Murari Gupta, the twenty-first branch of the Chaitanya tree, was a storehouse of love. The Lord’s heart would melt when he saw Murari’s meekness and humility. (Chaitanya Charitamrita 1.10.49)

When Mahaprabhu returned from Gaya, he saw Murari at the house of Shuklambar Brahmachari. Murari had heard of Mahaprabhu’s transformations from Sriman Pandit. Mahaprabhu was pleased with Murari and one day he gave him a vision of his form as the Varaha avatar; the Lord lifted Murari’s water jug on his nose as he gave a loud roar. Murari considered his life to have been fulfilled by this vision and he composed a hymn in glorification of the Lord. This event has been beautifully described by Vrindavan Das Thakur in the Chaitanya Bhagavat, Madhya-khanda, chapter 3.

The Lord took on the mood of Varaha in the house of Murari. The Lord climbed on his shoulders and danced in the courtyard. (Chaitanya Charitamrita 1.17.19)

Lord Gaurahari had the same kind of affection for Murari Gupta that Lord Ramachandra had for his servant, Hanuman. (Chaitanya Bhagavat 2.3.11) On the occasion of the 21-hour great manifestation (maha-prakasha) at Srivasa Angana, the Lord gave Murari a vision of himself as Ramachandra. When he saw his worshipable deity before him, Murari fainted. Then he glorified the Lord in a way which so pleased him that he gave a benediction to Murari which fulfilled all his desires.

He ordered Murari, “Look at my form”, and lo! Murari saw the form of Raghunatha directly before him. He saw the Lord of the Universe in the swarthy color of durba grass, sitting in the virasana, in the posture of a great bowman. He saw Sita and Lakshman standing on either side of him, and his army of monkeys surrounding him singing hymns of praise. It seemed to him that he was himself one of the monkeys, and as soon as he saw this, he fell down in a faint. The best of the physicians, Murari, lay unconscious on the ground, completely under Mahaprabhu’s spell. (Chaitanya Bhagavat 2.10.7-11)

On one occasion, when Mahaprabhu heard Murari Gupta recite the glories of Ramachandra, he wrote “the servant of Rama” on his forehead. (Chaitanya Charitamrita 1.17.61) On another occasion, Mahaprabhu displayed a four-armed Narayan form in the house of Srivasa, and began calling the name of Garuda. Murari Gupta heard the call, and giving a loud roar took the form of the king of birds. Mahaprabhu then climbed on his shoulders. This lila is described in the 20th chapter of the Madhya-khanda of Chaitanya Bhagavat, and in the 12th wave of Bhakti-ratnakara.

At Srivasa’s house, Mahaprabhu taught the spiritual truths about himself, Nityananda Prabhu and matters of etiquette through Murari. One day, Murari Gupta came to Srivasa’s house. Upon arriving, he first paid obeisances to Mahaprabhu and then to Nityananda. Mahaprabhu said, “This is not correct.” Murari could not understand what he meant. That night when he returned home, he had a dream in which he saw Nityananda as Balaram, fanning Mahaprabhu/Krishna with a fly whisk. Murari then understood what Mahaprabhu had been telling him and from then on first paid obeisances to Nityananda and afterwards to Mahaprabhu. Srila Bhaktisiddhanta Saraswati Goswami Thakur writes in his Gaudiya-bhashya, “Sri Murari was a worshiper of Balaram. Therefore to worship the Supreme Lord without first worshiping the guru and the jagad-guru is a mistake in sequence.”

The lotus-eyed Mahaprabhu was sitting down with the smiling Nityananda at his right hand side. Murari paid obeisances first to Nityananda and then to the feet of Vishvambhara. (Chaitanya Bhagavat 2.20.22-3)

The Lord gives Murari his pan

Mahaprabhu had great affection for Murari Gupta and so would give him his own pan, which Murari would eat with relish. When Mahaprabhu told Murari to wash his hands, Murari would simply wipe his hands on his head. It was at this time that Mahaprabhu suddenly began to criticize the false views of the Smarta Brahmins and Prakashananda’s mayavada.

The Lord said, “O foolish one, you will lose your caste status. My remnants are all over your body.” As he spoke, the Lord went into a trance in which he took on his identity as the Supreme Person. He ground his teeth and started to say something special, “There is a sannyasi named Prakashananda in Kashi who is cutting me into little bits. He teaches the Vedanta, but does not accept my form. I have caused him to become leprous, but still he does not understand. The fool does not realize that the unlimited universes are contained within my body, what arrogance that he should deny it! I tell you the truth Murari, for you are my servant: anyone who does not accept my form is bound for ruin.” (Chaitanya Bhagavat 2.20.31-36)

The Lord is very happy to accept a devotee’s offering, no matter how it is made. When Murari returned home, he told his wife that he wished to eat. His devoted wife carefully prepared rice with ghee and gave it to her husband. But Murari, absorbed in contemplation on Krishna, took handful after handful of the food and threw it on the ground, offering it to the Lord in this way. The amazing thing is that even though Mahaprabhu was not physically present there at that time, he accepted the offering. The next day he came to Murari’s house and said to him, “I have come to you for medicine. You made me eat so much, insisting that I take and eat. Now I have indigestion. You must give me some water, that will be the remedy for my stomach problem.” Mahaprabhu took water from a jug in Murari’s house, drinking down its entire contents. Seeing this, Murari fainted and all the devotees began to cry. (Chaitanya Bhagavat 2.20.69-71)

Murari would cure anyone who came to him, whether their disease was of the body or the soul. (Chaitanya Charitamrita 1.10.51)

Murari’s fear of the Lord’s departure

Murari Gupta analyzed the multiple incarnations of the Lord and came to the conclusion that in each one of the Lord’s appearances, before himself leaving, he arranged for his associates to leave also. Thus, Ramachandra destroyed Ravana to save Sita, but then he abandoned her. Krishna arranged for the destruction of the Yadus. Thus, Mahaprabhu too would inevitably be disappearing at a certain moment. He thought that it would be better for him to depart before that day arrived, for it would be too painful for him. For this reason, Murari purchased a sharp knife and kept it hidden in his home. The Lord knew of his intention and immediately came to his house and asked Murari to hand over the knife. Both the abovementioned lilas are found described in the Bhakti-ratnakara’s twelfth wave.

Murari Gupta would also go on the annual pilgrimage to see Mahaprabhu in Puri. Accompanied by his wife, he would feed Mahaprabhu many preparations. He would participate in the Rathayatra festival as a member of the third sankirtan group in which Mukunda Datta sang and Hari Das Thakur danced.

Mahaprabhu taught the principle of devotion to one’s worshipable deity through Murari Gupta. One cannot advance in devotional service without a particular devotion to a worshipable deity, or ishta-devata. Murari was an incarnation of Hanuman, and he saw Chaitanya Mahaprabhu as Ramachandra. On one occasion, Mahaprabhu desired to test his loyalty to his worshipable deity Rama by telling him to worship Krishna. He explained to Murari that Krishna was the Supreme Personality of Godhead, the fountainhead of all the other incarnations. Because he was the ocean of all the devotional flavors, the joy to be had in worshiping Krishna could not be had in the service of any other form of the Lord. Murari promised Mahaprabhu that he would do as he advised and worship Krishna, but when he returned to his home, he could not give up the lotus feet of Ramachandra. Just the thought of it made him upset and he stayed awake the entire night. In the morning, he went to Mahaprabhu and fell at his feet with tears in his eyes. He humbly submitted to the Lord:

I have sold my head to Ramachandra. I cannot remove it from his feet, for as soon as I try, it causes me great pain. I cannot give up the lotus feet of Raghunatha, even though this means disobeying you. What can I do? O merciful one, please allow my to give up my life here before you rather than suffer this fate. (Chaitanya Charitamrita 2.15.149-151)

Both Narayan, the husband of Lakshmi, and Ramachandra, the husband of Sita are equally the supreme personality of Godhead. Even so, the lotus-eyed Rama alone is everything to me.

Mahaprabhu was greatly satisfied to hear this exclusive devotional attitude to the worshipable deity. He said, “You are Hanuman himself, the eternal servant of Ramachandra. Indeed, why should you give up worshiping his feet?” Sri Jiva Goswami’s father Anupama was similarly devoted to Rama. Mahaprabhu compared him to Murari when Sanatan told him that Anupama was not able to give up worshiping Rama despite his brothers’ exhortations.

Murari Gupta disappeared on the same full-moon day as the autumn rasa-lila festival.