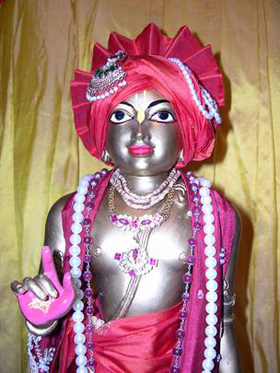 Sri Krsna Caitanya Mahaprabhu appeared in this world with a desire to bestow the supreme benediction upon the conditioned living entities. Sri Krsna in Vraja thought thus:

For a long time I have not bestowed unalloyed loving service to Me upon the inhabitants of the world. Without such loving attachment, the existence of the material world is useless. (Cc. Adi 3.14)

Everywhere in the world people worship Me according to scriptural injunctions (vidhi-bhakti). But simply by following such regulative principles one cannot attain the loving sentiments of the devotees in Vraja-bhumi. (Cc. Adi 3.15)

Knowing My opulence, the whole world looks upon Me with awe and veneration. But devotion made feeble by such reverence does not attract Me. (Cc. Adi 3.16)

By performing such regulated service in awe and veneration, one may go to Vaikuntha and attain the four kinds of liberation. (Cc. Adi 3.17)

I shall personally inaugurate the religion of the age – nama-sankirtana, the congregational chanting of the holy name. I shall make the world dance in ecstasy, realizing the four mellows of loving devotional service. (Cc. Adi 3.19)

I shall accept the role of a devotee, and I shall teach devotional service by practicing it Myself. (Cc. Adi 3.20)

My plenary portions can establish the principles of religion for each age. No one but Me, however, can bestow the kind of loving service performed by the residents of Vraja. (Cc. Adi 3.26)

Thinking in this way the time for the advent of the yugavatara (Narayana) arrived and thus Lord Narayana entered the body of Sri Krsna as He descended into the world at Nadia in the form of Sri Krsna Caitanya Mahaprabhu. In His youth the Lord performed many pastimes by which He flooded the world with the nectar of bhakti-rasa (mellows of pure devotion). In the Lords later pastimes He made the whole world fortunate by teaching about the name and fame of Sri Krsna – sri-krsna janaye saba visva kaila dhanya.

May that Lord, who is known as the son of Srimati Saci-devi, be transcendentally situated in the innermost core of your heart. Resplendent with the radiance of molten gold, He has descended in the age of Kali by His causeless mercy to bestow what no incarnation has ever offered before – the most elevated mellow of devotional service, the mellow of conjugal love. (Cc. Adi 1.4)

He instructs His own pure devotional service to His own devotees. (Cc.Adi
3.66)

Upadisam means instruction and the word mudra means a specific mark or gesture. Thus the distinguishing characteristic always visible in Sri Caitanya Mahaprabhu is that He gives instruction to His devotees in the matter of pure devotional service. If one approaches the Sri Murti of Sri Sri Gaura-Gadadhara one can see the right hand of Sriman Mahaprabhu in the specific pose (mudra) of nija-bhajana-mudram upadisam – instructing the mellows of His own pure devotional service.

In the verse beginning with, anarpita-carim cirat, the words,unnatojjvala-rasam sva-bhakti-sriyam (bestowing what no incarnation has ever offered before, the most elevated mellow of devotional service, the mellow of conjugal love) are important. Indeed the mellow of conjugal love (madhurya-rasa) is the sublime gift which Mahaprabhu descended to bestow. It is certainly the distinguishing characteristic of the Gaudiya Vaisnava sampradaya in that no other sampradaya offers access into this rasa.

This madhurya-rasa is the super-excellent rasa (mukhya-rasa) of Vraja because it has as its constituents all the mellow characteristics of santa, dasya, sakhya, and vatsalya-rasa within it – therefore the madhurya-rasa is the most sublime mellow of rendering pure devotional service.

The purpose of Sri Caitanya Mahaprabhu’s advent (to instruct the most elevated mellow of devotional service, the mellow of conjugal love) has been confirmed by Sarvabhauma Bhattacarya in the following verse:

Let me take shelter of the Supreme Personality of Godhead, Sri Krsna, who has descended in the form of Sri Caitanya Mahaprabhu to teach us real knowledge, His devotional service, and detachment from whatever does not foster Krsna consciousness. He has descended because He is an ocean of transcendental mercy. Let me surrender unto His lotus feet. (Cc. Madhya 6.254)