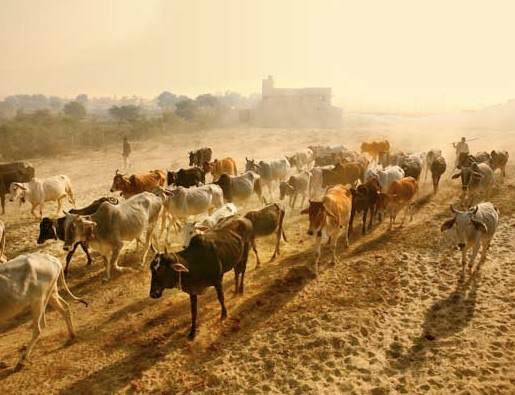 In reports of rising CO2 levels, there’s an impression that the carbon-and-oxygen molecule is some kind of toxin, an alien vapor coughed up by a century-plus of heedless industrialism that’s come back to haunt us. On closer inspection, it seems the problem isn’t carbon dioxide’s presence, but that there’s too much in the air and not enough in the ground where it lends fertility to agricultural soil.

How do we get that carbon back in the soil? Some suggest placing calcium carbonate or charcoal (aka “biochar”) directly into agricultural soil, as Miller-McCune examined last year.

But according to some who study how agricultural practices affect the environment, the catalyst for reducing atmospheric CO2 and restoring soil fertility is by bringing back the roving, grazing animals that used to wander the world’s grasslands. Not to diminish saving the rain forest or setting emissions caps, but what takes place in the digestive system and under the hooves of ruminants might be the crucible of climate change. In other words, a climate-friendly future might look less like a geo-engineered landscape with faux parasols than like, well, “Home On the Range.”

While the automobile and the fruits of industry are often the focus in bemoaning our CO2 predicament, a greater culprit has been agriculture: Since about 1850, significantly more atmospheric CO2 has come from poor farming practices as from the burning of fossil fuels. It’s not, says Christine Jones, a soil ecologist in Australia, because of exhaust-spewing tractors but rather from the depletion soil quality. Jones estimates that between 50 to 80 percent of organic carbon in the topsoil has vanished into the air in the last 150 years due to mismanagement, with about 7 tons of topsoil lost for every ton of grain produced.

According to the agricultural model known as “holistic management,” developed by biologist and environmental advocate Allan Savory, global soil depletion and excess atmospheric CO2 are flip sides of the same problem, and both can be resolved by the same solution: livestock — not cattle crammed into feedlots, but rather “planned grazing,” with herds of well-managed grazing animals nibbling on native grasses and roaming from place to place to elude predators and seek fresh pasture. Savory, based in Southern Africa, was awarded the 2010 Buckminster Fuller Challenge for his program Operation Hope, which trains African communities in holistic management.

Holistic management of rangeland has been on the academic radar for at least a decade and a half and, for example, has been credited with increasing biodiversity. But rangelands’ role in ever more far-reaching ecological benefits (as opposed to its harms) is less well studied outside of Savory’s work and those in his orbit, even as more ranchers use it. Still, the idea that agricultural land-use decisions impact broader ecosystems and even climate change is better understood.

Savory has “observed the beneficial relationship between grazing wildlife and cattle and the grass,” says Steven Apfelbaum, founder/chairman of Applied Ecological Services, Inc., a landscape restoration company based in Brodhead, Wis. The strategy, he says, builds on “the wonderful long-standing relationship between wildlife that eat grasses — their teeth, the ruminant system and digestive system — and the plants that develop their growth system to be eaten and continue growing. In nature, animals walk around the landscape. They chew down an area, move to another, maybe return in a month or two. It’s really simple: The grazing of elk, deer, buffalo or antelope stimulates more growth in the plant.”

Time now for a quick biochemistry refresher course: The carbon cycle is essential to all life forms. Through photosynthesis, plants take sunlight and CO2 from the air and create sugars and other carbon compounds. Plants are eaten or die and decompose, which enriches the soil by adding organic carbon.

“Over the eons, it’s the carbon cycle that’s built the soil, through photosynthesis, which generates sugars and soil biological decay that drives the cycling of nutrients,” says Abe Collins, whose new firm, New Soil Security, Inc. advises on soil-building and is developing software tools to support accelerated topsoil formation. “Atmospheric carbon is a basic building block of life.”

The problem, he says, is when carbon is not taken up by plants and entered into the soil system or when too much of it in the soil is oxidized — exposed to oxygen. The upshot is that the carbon goes into the atmosphere as CO2 rather than doing its work in the ground. And right now, the carbon cycle is out of whack.

The main offender, it seems, is bare ground. “For soil to form, it needs to be living, and to be living, soil needs to be covered” with plants in various stages of growth and decomposition, Jones says. Uncovered soil not only is biologically stagnant, it is more prone to erosion and does not hold water the way it does when carpeted with plant life.

“When the surface is bare, photosynthesis isn’t happening, soil biodiversity is compromised, carbon is oxidizing and water is evaporating or running off,” says Collins. “With bare ground, you can have a drought even when it rains.” The result is lowered productivity, wildfires, water shortages and desertification, which now threatens the livelihoods of people, particularly in poorer nations, around the world. By looking at the workings of the biosphere through the lens of holistic management, says Collins, one sees that climate change, biodiversity loss and desertification are really the same thing. “All we’re saying is that the carbon cycle is broken,” he says.

Now for the hopeful part: Biological processes can bring carbon into balance. Think of the dreary climate predictions you read in the news and compare that with what Ian Mitchell-Innes, a South African rancher and trainer in holistic management, has to say: “If we improve 50 percent of the world’s agricultural land we could sequester enough carbon in the soil to bring atmospheric CO2 back to pre-industrial levels in five years.”

According to Collins, a 1 percent increase in soil carbon on 5 billion acres of agricultural land would not only relieve our atmosphere of some 200 billion tons of CO2 — the equivalent of 100 parts per million — but also enhance food production, and, because its covered, carbon-rich soil infiltrates and holds significantly more water than its dried-out counterpart, aids stream and river flow, and protects against flooding and drought.

The role that grazing mammals play in this transformation, says Collins, is as “biological accelerators.” They enrich the soil in numerous ways: When they trample around, their hoofs break up the soil and aerate it; they eat grassland plants and stimulate their growth; they cycle dead plants back to the surface, which allows sunlight to low-growing parts of grasses; their waste provides fertilizer. And because they bunch together and move as a herd, all the plants get nibbled but none are overgrazed, which would leave the ground bare. (On the debit side, grazing animals’ flatulence is a source of greenhouse gases, but studies routinely find that livestock grazing on native grasses are less gassy than those munching on non-grass foodstuffs like corn.)

“Accelerated topsoil formation [is] the great work of our time – the centerpiece for addressing the environmental security and economic development issues of our time in one fell swoop,” says Collins. “It won’t happen magically or instantly, or if it’s just placed on the shoulders of farmers and graziers. Country folks and city folks are going to have to work very closely together on this.”

Does rapid soil-building through biological processes work? Scroll around websites about holistic management and you’ll see “before-and-after” shots that would put a Park Avenue plastic surgeon to shame. Mitchell-Innes says that after three to four years, dormant springs began to run again, and streams that flowed only during the summer were flowing year-round. Depending on the area, conventional farming requires 6 acres to sustain one animal for a year; holistic management methods can cut that to 1.5 acres per head, which, Mitchell-Innes notes, “lowers capital costs dramatically.”

At Dimbangombe, the Savory Institute ranch in Zimbabwe, poor, mostly bare ground after five years was turned into perennial grassland with springs and stream flow re-established. In the United States, Tony and Jerrie Tipton have restored abandoned gold mining tailings in Nevada’s high desert with a single dose of animal impact and hay — something that seeding, irrigation and other technological treatments had repeatedly failed to “fix.”

Though managed livestock grazing is the core strategy, there are many ways to bolster land health. For example, by simply using a device called a “Keyline” subsoil plow, which loosens dirt without turning it over, neglected farmland on the Whirlwind ranch in southwestern New Mexico — with its 7 inches of rain a year — went from nearly totally caked earth to 80 percent perennial grass coverage in one year. (The Keyline system, which aerates deep soil in combination with planned grazing, was developed by Australian P.A. Yeomans in the 1950s.)

“When I travel, I see bare fields, and I despair,” says Ridge Shinn, a Massachusetts cattle rancher and breeder trained in holistic management. He then thinks of what bringing in cattle could do for such land: “A few years isn’t a long time to go from desolation to thriving.”

Resolving the CO2 and soil fertility crises at the same time? Sounds too good to be true. Why hasn’t the environmental movement grabbed onto this?
“People have been distracted by mantras like ‘plant trees and save the rain forest,’” Apfelbaum says, adding that it’s easy to “get lost in nuances. You need to understand the whole system.”

Awareness of agriculture’s potential in addressing climate change is growing among environmentalists, says Collins, noting that even dropping fossil fuel emissions to zero would not be enough without bringing much of the carbon already in the air back into the soil.