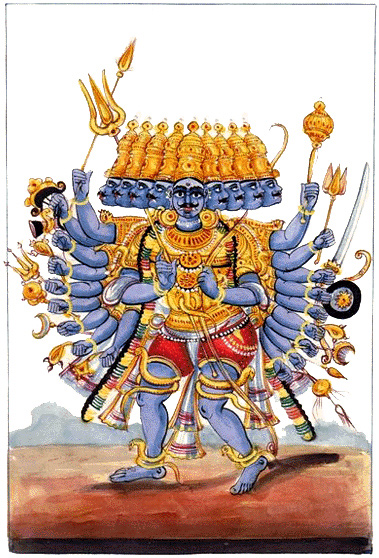 On October 16th, Lord Rama's victory over the demon Ravana is celebrated as Ramachandra Vijyotsava.

The Slaying of Ravana
Excerpted from the Valmiki Ramayana

When Ravana heard from his messengers that Rama had already arrived at Mahendra Hill, and was preparing to cross the ocean to Lanka, he summoned his ministers for advice. They unanimously decided to fight Rama to his death. To them, Ravana was indestructible and they, undefeatable. Only Vibhishana, the younger brother of Ravana, was cautious and opposed to this.

Vibhishana said, "Brother Ravana, you must return the chaste woman, Sita, to her husband, Rama, seek his forgiveness and restore peace." Ravana became upset with Vibhishana and told him to leave the kingdom of Lanka.

Vibhishana, through his magical power, reached Mahendra Hill and sought permission to meet Rama. The monkeys were suspicious but took him to Rama as a captive. Vibhishana explained to Rama all that happened in Ravana's court and sought his asylum. Rama gave him sanctuary and Vibhishana became the closest adviser to Rama in the war against Ravana. Rama promised Vibhishana to make him the future king of Lanka.

To reach Lanka, Rama decided to build a bridge with the help of the monkey engineer Nala. He also summoned Varuna, the God of the Ocean, to cooperate by staying calm while the bridge was in the making. Immediately thousands of monkeys set about the task of gathering the materials to build the bridge. When the materials were piled up in heaps, Nala, the great architect, started to build the bridge. It was a stupendous undertaking. But the entire monkey army worked hard and completed the bridge in just five days. The army crossed over to Lanka.

After crossing the ocean, Rama sent Angada, the son of Sugrive, to Ravana as a messenger. Angada went to Ravana's court and delivered Rama's message, "Return Sita with honor or face destruction." Ravana became enraged and ordered him out of the court immediately.

Angada returned with Ravanas message and preparation for the war began. The next morning Rama ordered the monkey army to attack. The monkeys rushed forward and hurled huge boulders against the city walls and gates. The battle continued for a long time. Thousands were dead on each side and the ground soaked in blood.

When Ravana's army was losing, Indrajeet, Ravana's son, took the command. He had the ability to fight while staying invisible. His arrows tied up Rama and Lakshmana with serpents. The monkeys began to run with the fall of their leaders. Suddenly, Garuda, the king of the birds, and the sworn enemy of the serpents, came to their rescue. All of the snakes slithered away leaving the two brave brothers, Rama and Lakshmana, free.

Hearing this, Ravana himself came forward. He hurled the powerful missile, Shakti, at Lakshmana. It descended like a fierce thunderbolt and hit hard at Lakshmana's chest. Lakshmana fell down senseless.

Rama wasted no time to come forward and challenged Ravana himself. Following a fierce fight Ravana's chariot was smashed and Ravana was sorely wounded. Ravana stood helpless before Rama whereupon Rama took pity on him and said, "Go and rest now. Return tomorrow to resume our fight." In the mean time Lakshmana recovered.

Ravana was shamed and called upon his brother, Kumbhakarna for assistance. Kumbhakarna had the habit of sleeping for six months at a time. Ravana ordered him to be awakened. Kumbhakarna was in a deep sleep and it took the beating of drums, piercing of sharp instruments and elephants walking on him to awaken him. He was informed of Rama's invasion and Ravana's orders. After eating a mountain of food, Kumbhakarna appeared in the battlefield. He was huge and strong. When he approached the monkey army, like a walking tower, the monkeys took to their heels in terror. Hanuman called them back and challenged Kumbhakarna. A great fight ensued until Hanuman was wounded. Kumbhakarna headed towards Rama, ignoring the attack of Lakshmana and others. Even Rama found Kumbhakarna difficult to kill. Rama finally discharged the powerful weapon that he obtained from the wind God, Pavana. Kumbhakarna fell dead.

Hearing the news of his brother's death, Ravana swooned away. After he recovered, he lamented for a long time and then called Indrajeet. Indrajeet consoled him and promised to defeat the enemy quickly.

Indrajeet began to engage in the battle safely hidden behind the clouds and invisible to Rama. Rama and Lakshmana seemed to be helpless to kill him, as he could not be located. Arrows came from all directions and finally one of the powerful arrows hit Lakshmana. Everyone thought this time Lakshmana was dead and Sushena, the physician of the Vanara army, was called. He declared that Lakshmana was only in a deep coma and instructed Hanuman to leave immediately for Gandhamadhana Hill, located near the Himalayas. Gandhamadhana Hill grew the special medicine, called Sanjibani, that was needed to revive Lakshmana. Hanuman lifted himself in the air and traveled the entire distance from Lanka to Himalaya and reached the Gandhamadhana Hill. As he was unable to locate the herb, he lifted the entire mountain and carried it to Lanka. Sushena immediately applied the herb and Lakshmana regained consciousness. Rama was relieved and the battle resumed.

This time Indrajeet played a trick on Rama and his army. He rushed forward in his chariot and created an image of Sita through his magic. Catching the image of Sita by the hair, Indrajeet beheaded Sita in front of the entire army of the Vanaras. Rama collapsed. Vibhishana came to his rescue. When Rama came to senses Vibhishana explained that it was only a trick played by Indrajeet and that Ravana would never allow Sita to be killed.

Vibhishana further explained to Rama that Indrajeet was realizing his limitations to kill Rama. Hence he would soon perform a special sacrificial ceremony in order to acquire that power. If successful, he would become invincible. Vibhishana suggested Lakshmana should go immediately to obstruct that ceremony and slay Indrajeet before he became invisible again.

Rama accordingly sent Lakshmana, accompanied by Vibhishana and Hanuman. They soon reached the spot where Indrajeet was engaged in performing the sacrifice. But before the Rakshasa prince could complete it, Lakshmana attacked him. The battle was fierce and finally Lakshmana severed Indrajeet's head from his body. Indrajeet fell dead.

With the fall of Indrajeet, Ravana's spirit was in complete despair. He wailed most piteously, but sorrow soon gave way to anger. He furiously rushed to the battlefield to conclude the long drawn fight against Rama and his army. Forcing his way, past Lakshmana, Ravana came face to face with Rama. The fight was intense.

The culmination of this great battle between Lord Rama and Ravana is described in the Yuddha-kanda of Sri Valmiki Ramayana:

"Empowering the arrow with the required mantras, Rama placed the terrible Brahmastra upon His bowstring. While gazing upon the flaming arrow, the monkeys became filled with delight, while dread penetrated the hearts of the Rakshasas. As Rama pulled the bow string back to His ear, the earth began to shudder and the heavens appeared to be thrown into confusion. At last, when Rama released the Brahmastra, it sped through the air like death itself, striking violently the chest of the Rakshasa king. Piercing through Ravana's heart like a thunderbolt, the fierce arrow then entered into the earth, taking Ravana's sinful life along with it. Then, as the wonderful Brahmastra reentered Rama's quiver, Ravana dropped his bow from his hand. Vomiting blood from his ten mouths, he fell down dead upon the ground."

As Ravana fell dead from his chariot, the Rakshasas stood silent in amazement. They could scarcely believe their eyes. The end was so sudden and final.

In his Purport to Srimad Bhagavatam 2:7:23, Srila Prabhupada writes:

"Lord Rama is the Supreme Personality of Godhead, and His brothers, namely Bharata, Laksmana and Satrughna, are His plenary expansions. All four brothers are visnu-tattva and were never ordinary human beings. There are many unscrupulous and ignorant commentators on Ramayana who present the younger brothers of Lord Ramacandra as ordinary living entities. But here in the Srimad-Bhagavatam, the most authentic scripture on the science of Godhead, it is clearly stated that His brothers were His plenary expansions.

As stated in the Bhagavad-gita (4.7), the Lord appears when there are discrepancies in the discharge of factual religion. Lord Ramacandra also appeared under the same circumstances, accompanied by His brothers, who are expansions of the Lord's internal potency, and by Laksmiji Sitadevi.

Lord Ramacandra was ordered by His father, Maharaja Dasaratha, to leave home for the forest under awkward circumstances, and the Lord, as the ideal son of His father, carried out the order, even on the occasion of His being declared the King of Ayodhya. One of His younger brothers, Laksmanaji, desired to go with Him, and so also His eternal wife, Sitaji, desired to go with Him. The Lord agreed to both of them, and all together they entered the Dandakaranya Forest, to live there for fourteen years. During their stay in the forest, there was some quarrel between Ramacandra and Ravana, and the latter kidnapped the Lord's wife, Sita. The quarrel ended in the vanquishing of the greatly powerful Ravana, along with all his kingdom and family.

Sita is Laksmiji, or the goddess of fortune, but she is never to be enjoyed by any living being. She is meant for being worshiped by the living being along with her husband, Sri Ramacandra. A materialistic man like Ravana does not understand this great truth, but on the contrary he wants to snatch Sitadevi from the custody of Rama and thus incurs great miseries. The materialists, who are after opulence and material prosperity, may take lessons from the Ramayana that the policy of exploiting the nature of the Lord without acknowledging the supremacy of the Supreme Lord is the policy of Ravana. Ravana was very advanced materially, so much so that he turned his kingdom, Lanka, into pure gold, or full material wealth. But because he did not recognize the supremacy of Lord Ramacandra and defied Him by stealing His wife, Sita, Ravana was killed, and all his opulence and power were destroyed.

Lord Ramacandra is a full incarnation with six opulences in full, and He is therefore mentioned in this verse as kalesah, or master of all opulence."