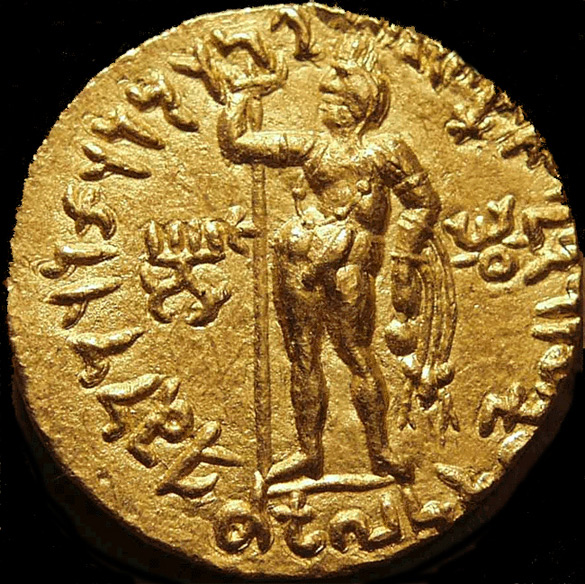 Part Two of a monograph by Ramaprasad Chanda, published by the Archaeological Survey of India, 1998.

The Garuda pillars of Besnagar not only indicate that Vasudeva was already identified with Vishnu as conceived in the Mahabharata, but they also bear witness to the existence of one if not two temples of Vishnu at Vidisa at the time of their erection. In the inscription on the fragment of our second pillar it is distinctly called "the Garudadhvaja of the excellent temple (prasadotama) of the Bhagavat (Vishnu)." A temple of Vishnu must have contained an image or some form of concrete representation of Vishnu within it. The Garuda columns were of course surmounted by images of Garuda. The making of the image of Garuda, the vahana or carrier of Vishnu, presupposes the making of the image of Vishnu.

The inscription on the Besnagar column of Heliodorus not only affords presumptive evidence of the prevalence of the worship of the image of Vishnu in the early Sunga period, but lends indirect support to the statement of Q. Curtius "that an image of Herakles was carried in front of the army of Porus as he advanced against Alexander." The Indian Herakles has been identified by some scholars with Krishna and by others with Siva. The reasons for the latter view are thus stated by Mr. Kennedy:

"The identification of the Indian Herakles is fairly easy. The Greek Herakles figures on the Indo-Scythic coins of Kadphises I, and is replaced by the Indian Siva on coins of Kadphises II under the name of Oesho, and with various attributes including the club, Siva figures on coins of Kanishka, Huviskha and Vasudeva. Mr. D.R. Bhandarkar has shown that the incarnation of Siva as Lakulisa, "the Lord who bears the club," goes back to this period. It is held that the name of the people called Sibi in Sanskrit – the Sibai of the Greek writers, who mention them as descendants of the followers of Herakles – marks them as special worshippers of Siva, the letters b and v being constantly interchanged.

Lastly, Herakles' daughter, Pandaia, recalls the kingdom of Pandion or Pandya, a famous kingdom of Southern India, while we infer from the 'Periplus' that Kumari was especially worshipped at Cape Comorin. Now the Dravidians of this region are still noted for their devotion to Siva, and Kumari is at once his Sakti, his daughter and his wife."

(1) Mr. Kennedy's statement, "under the name of Oesho, and with various attributes including the club, Siva figures on coins of Kanishka, Huviskha and Vasudeva", is rather misleading. The figure of Siva, either two-armed or four-armed, is one of the most common features on the reverse of the coins of these Kushan kings. But Siva with club is very rare and exceptional.

Mr. Vincent A. Smith in his Catalogue of Coins in the Indian Museum, Calcutta, gives an account of a few specimens of a type of copper coin of Kanishka with two-armed Oesho (Siva) grasping a spear or a staff in the right hand and with left hand resting on a club. But the absence of the trident, a necessary attribute of Siva, renders this identification very doubtful.

Mr. Whitehead describes one copper coin of Kanishka on the reverse of which "Siva is without trident, and the name Oeslio on the right reads upwards." Siva with club is found on a type of gold coin of Huvishka, of which two specimens are known. Here the deity is figured three-faced and four-armed, standing facing, holding in two right hands thunderbolt (or drum) and water-vessel and in two left hands trident and club. But as the club is not associated with other types of Siva figured on the ancient coins whether two-armed or four-armed, it cannot be recognized as a necessary attribute of Siva as conceived in the first and second centuries B.C., but only as abnormal feature.

The earliest representations of Siva are probably found on some of the coins of the Indo-Parthian king Gondophares where the god is figured as holding a trident in one hand while the other hand is either empty or holds a palm. One of Gondophare's titles on his coin legends, devavrata, 'devoted to gods', indicates that he had adopted the Indian worship of the devas as distinguished from the Iranian worship of the Ahuras.

On the coins of the Kushan king Kadphises II Siva is figured as two-armed and invariably holding a trident in the right hand, in one type combined with a battle-axe, and the left hand is either empty or holds a gourd. In the Mahabharata the dreadful spear called Pasupata, the battle-axe (parasu), the bow called Pinaka and the trident (trisula) are named as the weapons of Siva. Varahamihira in the Vrihatsamhita (LVII, 43) names the trident and the Pinaka as the weapons of Siva and in the Matsya Purana (OCLXI, 23) only the trident is named. In the Mahabharata and in all other texts gada or club is mentioned as an attribute, not of Siva, but of Vishnu. Siva is sulin, the holder of the trident, and pinakin, 'the holder of the bow pinaka, while Vishnu is sankha-chakra-gadadhara, 'the holder of the conchshell, discus (sudarsana) and club,' or briefly, gadadhara, 'holder of club'. Therefore it is more reasonable to identify the Indian Herakles with Vishnu than with Siva. 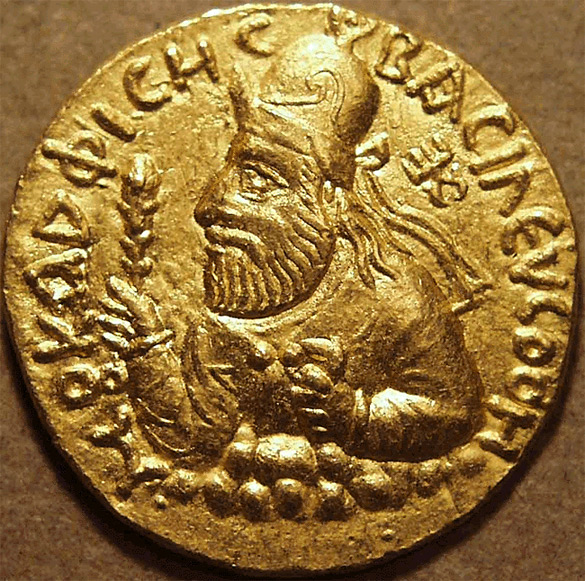