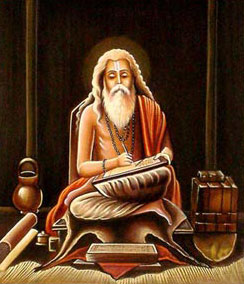 The meaning of the phrase, ‘Guru is one’ is derived from the Sanskrit statement akhanda-guru-tattva. This means the undivided (akhanda) principle of the guru-tattva. This undivided guru-tattva manifests in three aspects, namely caitya-guru, diksa-guru, and siksa-guru respectively. Caitya-guru is the Supersoul within the heart of the living entity. Diksa-guru and siksa-guru are the two kinds of gurus appearing externally as pure devotees of the Supreme Lord. The diksa and siksa-gurus are considered equal manifestations of Krsna because they manifest to take the disciple back to Godhead. The individuality of the diksa and siksa-gurus exists as Vaisnavas but in purpose they are one – they are equal manifestations of Krsna and therefore they are said to be ‘one’.

The position of the bona-fide guru in Krsna consciousness is realized by a bona fide disciple in stages according to the disciple's subjective achievement. First the disciple may realize the guru to be the representative of Krsna. The next higher stage is that the disciple realizes that the guru is a manifestation of Baladeva Prabhu or Sri Nityananda Prabhu. Baladeva-tattva is the energy of the Supreme Lord that manifests the pastimes or lilas of the Lord. Baladeva Prabhu manifests directly as Sri Nityananda Prabhu to canvas the conditioned living entities to become engaged in the Lord's transcendental service. Canvassing on behalf of the Supreme Lord is the work of Sri Gurudeva and therefore he is recognized as the manifestation of Baladeva Prabhu or Sri Nityananda Prabhu.

Baladeva Prabhu, or Sri Nityananda Prabhu, are the ultimate guru principle (guru-tattva) for all devotees in dasya, sakhya, and vatsalya-rasa in both krsna-lila and gaura-lila. According to the disciple's advancement in rasa-tattva the disciple will realize that Sri Gurudeva is a leader of a particular group of eternal servitors of the Supreme Lord.

That Sri Gurudeva is the manifestation of Srimati Radharani is the purport of Visvanatha Cakravarti Thakura’s verse, saksad-dharitvena samasta-sastrair – “The spiritual master is the dearmost servant of Sri Hari, being the non-different form of the Supreme Lord”.

The dearmost servant of Krsna (Sri Hari) is indeed Srimati Radharani and the non-different form of the Supreme Lord is also Srimati Radharani. Radha and Krsna are the One Absolute Truth manifest in two for the purpose of enjoying transcendental pastimes.

The loving affairs of Radha-Krsna are transcendental manifestations of the Lord’s internal pleasure-giving potency. Although Radha and Krsna are one in Their identity, They have separated Themselves eternally. Now these two transcendental identities have again united in the form of Sri Krsna Caitanya. I bow down to Him, who has manifested Himself with the sentiment and complexion of Srimati Radharani although He is Krsna Himself. (C.c. Adi 1.1.5)

Following the above thought Sri Gurudeva may also be realized as gaura-tattva or non-different from Sri Caitanya Mahaprabhu. In this case the disciple ultimately realizes that Sri Gurudeva is a direct manifestation of Sri Gadadhara Pandita who is the bhava or the manifest emotions of Srimati Radharani.

I worship the greatly learned spiritual master, Srila Gadadhara Prabhu, who expands the mellows of devotional service and whose lotus feet are worshipped by the kings of the brahmanas. Among his confidential associates, he reveals his actual form as Srimati Radharani. He distributes the nectar of the ecstatic mellow of the Gopis conjugal love, strictly following the instructions of all the devotional scriptures. (Sri Sri Gadadharastakam 6)

The above mentioned points of guru-tattva are all relative realizations of the position of the guru according to the disciple's advancement in Krsna consciousness. This is the Gaudiya siddhanta of the guru-tattva as revealed by previous acaryas in our parampara.

Srila Prabhupada used to say, “Guru means to repeat the words of Krsna without adding one’s own interpretation and therefore guru cannot be two.”

Although the guru is in most cases a jiva (jiva-tattva), he is not to be considered as such. His position is two-fold. As a Vaisnava he is considered a jiva but the disciple is not so much concerned with that position. The disciple is mainly concerned with the delegation of Krsna manifest in Gurudeva and that is the guru-tattva. So the guru’s position is two fold – he is jiva-tattva and he is guru-tattva. We do not say that Gurudeva is jiva-tattva, rather we say that Gurudeva is guru-tattva or acarya-tattva. In this way the disciple always keeps the conception of Sri Gurudeva above that of the ordinary human being.

Frequently devotees do not make these discriminations but this is due to their not diving deep within the ocean of Krsna consciousness. Madhyama-adhikari means the plane of careful and accurate discrimination. Such discrimination is necessary in order to reach the stage of uttama-adhikari (first class devotee).

On Ekadasi we may offer prasadam with grains to a photo of Gurudeva on the altar while engaged in worshipping the Deity of Radha and Krsna, but in his room on that same day we only offer Gurudeva standard Ekadasi prasadam. While performing worship the disciple sees no difference between guru and Krsna but while rendering personal service to Sri Gurudeva the disciple makes a discrimination in order to please Gurudeva understanding that he considers himself a Vaisnava (servant of the Lord) and not the Lord directly. In the event that a guru declares himself to be Krsna it becomes clear that he has no actual knowledge of the science of Krsna consciousness. A bona-fide guru never claims to be Krishna.

It is standard in Gaudiya sampradaya that tulasi leaves are only offered to the lotus feet of Krsna (visnu-tattva) but the disciple understanding that the guru’s heart is one with Krsna, places a tulasi leaf on the chest of Sri Gurudeva while performing worship.

The oneness of guru is to be meditated on as prescribed in the guru-mantra (aim gurave namah) and the guru-gayatri – “I respectfully dedicate my heart and soul to the holy service of Sri Sri Radha-Krsna through service to Sri Gurudeva, who is a non-different manifestation of Their mercy.”

The meaning of krsnanandaya is threefold:

(2) Krsnananda means to meditate on that guru who gives pleasure to his dearmost Lord Krsna through his pure devotional service.

(3) In the word krsnananda, krsna is Sri Krsna and ananda is hladini Srimati Radharani, so krsnanandaya means meditation on Sri Gurudeva who is the representative of both Radha and Krsna combined. These three aspects of the term krsnanandaya may be applied to gurus.

The term gaura-priyatva is another significant definition of Sri Gurudeva. The word gaura-priya has two connotations:

(2) One in whose life Sri Gaura is the dearmost object of devotion.

According to the realization of pure devotees gaura-priya and krsna-priya are parallel – a guru of krsna-lila and a guru of gaura-lila are non-different.