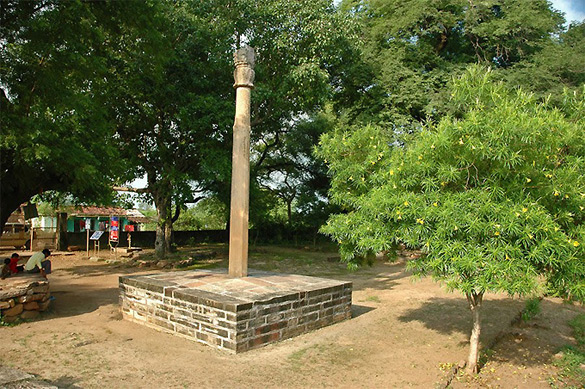 Part One of a monograph by Ramaprasad Chanda, published by the Archaeological Survey of India, 1998.

In one sense, the science of archaeology may be said to owe its advancement to a desire to test the authenticity of the sacred traditions. The results of explorations in Bible lands have partially justified expectations, and archaeology has proved a useful mediator between the Holy Writ and the natural sciences. Texts unearthed from the mounds of the Euphrates valley have revealed the fact that even the Biblical stories of the creation and the deluge are not the deliberate inventions of priests, but are based on hoary traditions not without rational basis.

In India also archaeology researches have afforded proofs of the antiquity and authenticity of no inconsiderable number of Indian sacred traditions. The Asoka edicts on the columns of Rumindei and Nigliva and the labeled sculptures on the Bharhut rail prove the antiquity of the legends and traditions relating to Sakyamuni Buddha and his six predecessors. The Brahmi inscriptions on Jaina sculptures found at Mathura demonstrate the authenticity of many of the Jaina traditions recorded in the Kalpasutra of Bhadrabahu.

As compared with these two heterodox creeds, the legends and traditions of other Indian sectaries have received very little light from archaeological discoveries. Yet monuments that illustrate the history of Vaishnavism before the rise of Christianity are not wanting. I propose in this memoir to make an attempt to reconstruct the early history of Vaishnavism on the basis of these monumental records, for, in the words of Foucher, "upon this immutable foundation we can construct inferences more rigorous than upon the moving sand of texts."

I.
The earliest known Vaishnava monument is the inscribed column at Besnagar near Bhilsa in Central India (Gwalior State). In the votive inscription on this column we are told, "This Garuda column (Garudadhvaji) of Vasudeva the god of gods (devadeva) was erected here by Heliodorus, a Bhagavata, the son of Dion, and an inhabitant of Taxila, who came as Greek ambassador from Maharaja Antialkidas to King Kasiputra Bhagabhadra."

Antialkidas is supposed to be one of the earlier members of the line of Eucratides, who came to the throne of Bactria about 171 B.C. after ousting Demetrius. The archaic type of Brahmi characters used in the inscription of Heliodorus indicates that it was probably engraved some time in the first half of the second century B.C.

A fragment of the shaft of another octagonal Garuda column evidently from Besnagar found in a narrow street of Bhilsa and now preserved in the Besnagar Museum bears a Brahmi inscription in one line on seven out of its eight sides. The occurrence of angular gas side by side with round gas and of angular tas shows that this record must be assigned to about the close of the second century B.C. The inscription which has been deciphered by Venie with a good deal of skill, reads as follows:

Professor Bhandarkar takes bhagavatena on the second side as the name of the donor. The name of the donor was evidently given on the third side where no trace of it now remains, and Venis appears to be correct in taking bhagavatena as an adjective qualifying that name. So the epigraph may be thus translated:

"This Garuda column of the excellent temple of the Bhagavat was erected by Gautami-putra (Gautami's son) ……. , a Bhagavata (Vaishnava), in the twelfth year after the installation of Maharaja Bhagavata."

Professor Bhandarkar no doubt rightly identifies Maharaja Bhagavata of this record with the Sunga king of the same name, "the last but one of the Sunga family mentioned in the Puranas," who may be supposed to have been reigning about 100 B.C. 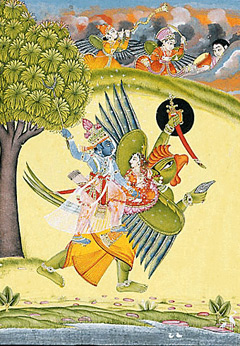 In the Mahabharata (I, 33.16-17) we are told that Garuda, in return for boons granted to him by Vishnu, himself offered a boon to Vishnu; so Vishnu asked Garuda to be his vehicle and made him the emblem of his flag saying, "Thou shalt stay above me." So the mention of Garudadhvaja in connection with Vasudeva in the inscription of Heliodorus shows that when Heliodirus erected his column, the identification of Vasudeva with Vishnu as conceived in the epic was an accomplished fact.

The designation of Vasudeva as "devadeva" in the inscription of Heliodorus also enables us to explain an obscure passage of the Mahabhasya of Patanjali. Panini in IV. 3.98 states that, "The affix vun is added to the names Vasudeva and Arjuna in the sense of 'this is his object of devotion (bhakti)'". Thus Vasudeva + vun=Vasudevaka, means "a devotee of Vasudeva;" and Arjuan+vun=Arjunaka, means "a devotee of Arjuna." But in the next following aphorism Panini says that the affix vun (not vun) is added in the same sense to words denoting gotra and Kshatriya. While commenting on IV. 3.98 Patanjali raises the question, why provide for the addition of the affix vun after Vasudeva while, as denoting a famous Kshatriya, the addition of vun is provided for in the next sutra and the addition of either vun or van to Vasudeva does not make any different in form or sound. To this Patanjali replies, "athava naisha kshatriyakha samjnaiishai tatrabhavatah, "Or it (Vasudeva) is not the name of a Kshatriya. It is the designation of the tatrabhavat ". [ ]

As Vasudeva is called devadeva in this inscription, we may safely conclude that Patanjali by saying that Vasudeva is the name of tatrabhavat, 'the adorable one,' and not of a Kshatriya, refers to this devadeva 'god of gods,' who has Garuda as the emblem on his banner.

If Vasudeva in Panini's aphorism IV.3.09 is a god (devatavisesha) and not a Kshatriya, it follows that the other person named in the sutra, Arjuna, is also a deity and not a Kshatriya. According to Panini's sutra II.2.34, the name Arjuna as consisting of fewer vowels than the name Vasudeva ought to have been placed first (in sutra IV.3.98) and we should have the compound Arjuna-vasudevabhyam instead of Vasudev-Arjunabhyam. The non-observance of this general rule by Panini in IV.3.98 is explained by a varttika (4) of Katyayana which lays down that the name of the (more) venerable person should be placed first in a co-ordinative compound irrespective of the quantity of vowels. So as the more venerable of the two, Vasudeva is named first and Arjuna afterwards.

A divine being called Nara is often mentioned with Vishnu or Narayana in the Mahabharata. In the story of the churning of the ocean (Book I) Vishnu takes away the nectar from the mighty Danavas accompanied by Nara. In the dreadful battle between the gods and the Asuras that follows, Narayana enters the field with Nara who is armed with a heavenly bow. "Then the divine Nara coming to that dreadful conflict of the Asuras and Ganas (the followers of Rudra), reducing to dust the rocks (hurled by the Danavas) by means of his gold-headed arrows, covered the heavens with the dust." When, after defeating the Asuras, the gods returned to heaven, they made over the vessel of nectar to Nara for careful keeping (rakshitum).

In Book III, chapters 145 and 156 of the epic, Nara and Narayana are represented as two divine sages in whose hermitage at Vadari the five sons of Pandu lived for some time during their exile. In another chapter (41) of the same book of the epic Arjuna is told by Yama, "Thou wert in they former life a Rishi of immeasurable soul, known as Nara of great might. At the command, O child, of Brahma, thou has been born among men." 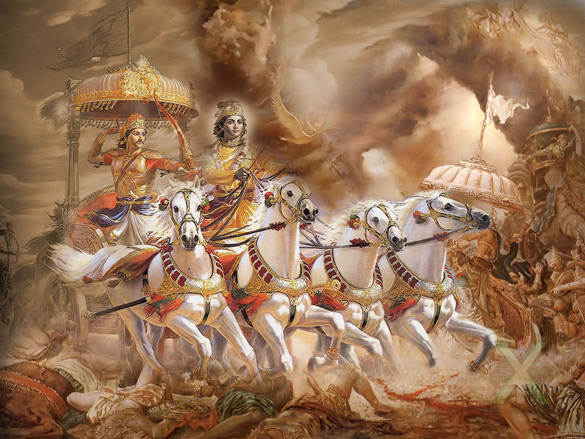