Krishna himself is a mendicant. Once Srimati Radharani had a date with him. And Krishna was late because on the way he met Candravali, and Candravali is also dearest to Krishna, but not as dear as Srimati Radharani. Candravali started to talk and talk and talk and Krishna wanted to run away to see Srimati Radharani. But he couldn't tell Candravali that he wanted to leave. So Radharani was expecting Krishna and when he didn't come she thought that he didn't love her. She was waiting and she became upset and said: "No more!". She told Lalita and Vishakha, "I am leaving. Krishna is a cheater. He doesn't care about my heart. I don't want to see him anymore." and she started crying.

Krishna was very very very sad and suddenly Paurnamasi in the form of an old lady appeared. She knows everything and is very smart. She knows the latest gossip of Vraja. Paurnmasi: "Hello Krishna. So, cry-baby, what happened? Tell me, you can trust me." Krishna looked at her and kept crying. You know how children are when they are sad. You tell them sweet words but they are upset and don't accept anything. Krishna was like that. Paurnamasi: "Krishna, why are you crying? You have your beautiful flute, play it!". The upset Krishna: "I don't want my flute". He threw it away. Paurnamasi thought: "Ohh, something is wrong with this child". She said: "Krishna, you are in Vrindavan." Krishna, still upset: "I don't want to know anything about Vrindavan." Paurnamasi: "But Krishna, you with your blue skin, you have conquered all of Vraja." Krishna: "I don't want any blue skin". He abandoned his blue color. Paurnamasi thought: "How can I encourage him? What can I tell him to he relieve him of his pain? She said: "Look Krishna, look at your beauituful hair!" Krishna answered: "I don't want hair" and with his hands he tore off all his hair. Without his flute, blue skin and hair Krishna was completely unrecognizable. Paurnamasi said: "Krishna, you have to cheer up!". Krishna: "I don't want to know anything. I'm becoming a sannyasi, a mendicant". Krishna renounced his yellow silk dhoti, put on a simple piece of cloth and started walking. Paurnamasi didn't know what to do.

Krishna began to beg everywhere. In Javat, in the place where Radharani lived then in the house of Jatila and Kutila. Radharani was in the house, crying. She seemed to dissolve into tears. She was crying and crying. In India there is a saying: If a woman cries in a house then that house is in danger. Because where a woman is suffering Laksmi Devi goes away. Jatila and Kutila were very worried. They were worried because Radha was crying. All the blessings were leaving. They tried to encourage her together with the gopis but were unable to pacify. Jatila and Kutila didn't understand what was going on and thought about how to stop Radha's crying. They had heard that one can recover the joy by giving charity to a sannyasi. Of course a good recommendation, giving charity uplifts the joy in a sad person. So Jatila and Kutila thought: "We have to find a sannyasi now". One of the gopis said: "There is one sannyasi in Javat. He appears a bit strange, but he is begging on the streets there". They decided to bring the sannyasi to Radha. They took him to his room so that she could give him a donation. But Radha was still crying and crying. Vishakha said: "Come on Radha, give a donation to the sannyasi, so you can feel better and let the pain go away". Then Radha opened her eyes and gave the donation to the sannyasi. She looked at him and thought: "This face I recognize". She was hypnotized and thought: "You? What are you doing here? Why are you like this? Where is your flute? Your hair, your blue skin? Radharani was astonished in the middle of her pain and Krishna said: "I turned into a mendicant, because I can't live without your love. I came to beg for your love." 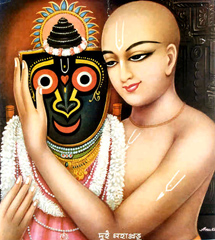 Can you imagine? All the anger of Radharani went away. His feeling of being rejected ended. There Krishna showed that he is a mendicant of love. And this form of Krishna is Lord Caitanya. He is a beggar of love. He comes to the world to beg.

We have to do the same, beg and say: "Buy this book of Srila Prabhupada, come to our class, eat this plate of prasadam". Devotees are only mendicants and we feel no pity in saying this. We are not workers, lawyers or secretaries. We are beggars of love. We beg all the world to get out of madness and leave all this self-deception. We dedicate ourselves to the preaching and carry this message to everyone. Thanks to Srila Prabhupada and Krishna we are here. So many books that Srila Prabhupada made. If you are not delivering this you are ignoring the gift he gave us. The personal gift he made for you. And you are also ignoring all the people that work in making devotional music, art etc. We are mendicants and for that reason we have made Prema Mandal, a gift of love. So devotees give sanctuaries of love. If I have to be on my knees so that you chant Hare Krishna, I will do it. This movement of sankirtan is the movement of mendicants of love.

The worst sankirtan is the one that is not being offered. The worst communicator is the one that doesn't communicate anything. We have to be aware. Do you know what the Seva is? Do you know why we are working? Why we have so many people working in the Seva offices, producing material? Why we have talked to so many people in India, filming interviews, asking to support our campaigns in Vrindavan? A work of Lord Chaitanya, a work of Srila Prabhupada, something very nice. Almost historical. Of course historical if Vrindavan stays clean and the sewage stops going into the Yamuna. The history of the mission of Srila Prabhupada is this: Srila Prabhupada started working from nowhere and achieved everything by working and working. He was the first Vaishnava Guru in New York. He made such nice recordings, so beautiful, organized the first plays, the first musical groups, the first distribution of incense, to finance temples, organized the first artists to make windows to the spiritual world, the first organic farms. Prabhupada was a man of ambitions. He begged to the whole world. He's a beggar of love. So what's the problem if you're also a mendicant of love? I am a mendicant, now traveling by the valley of Elqui to see who we find on the way to deliver his/her heart to Krishna. A sannyasi is not collecting donations for clothes or old cars, a sannyasi only collect donations to serve Krishna. The movement of sankirtan is a collection of hearts. We are very fortunate to deliver our hearts to our spiritual master.

The first thing that Srila Prabhupada told me in Paris was: "Dedicate yourself for the rest of your life to distribute this message to the world." I was scared and I said that I want to be near him. Srila Prabhupada told me that vani (the instruction) is more important than vapuh (the physical nearness). And one who is serving his spiritual master, is associating with him in the heart. The heart of the spiritual master is his mission. And my desire is to serve his mission. I live in the desire to have nice schools of faith education. Faith is the greatest gift in history, greater than intelligence. Faith can turn you into a pure devotee. God has given us so many things, but faith is the greatest of them. We are talking about Oida theraphy so that people can understand the gift that God has given to us.

I want to give to people the heritage Srila Prabhupada left for us, sadhu sanga. You can be with all the great personalities that are dedicated to Krishna consciousness. It's not quantity but quality. It's possible that a person turn into an ecstatic devotee by reading only one book. But people also ask for quantity. I myself ask for quantity, I always want to listen to more lectures of Srila Prabhupada or Srila B.P. Puri Maharaj, or Srila B.R. Sridhar Maharaj, or Srila Harijan Maharaj. When you dance and chant and preach it's new nectar that spreads. It's the principal point of Krishna consciousness. In every town and village, every soul that desires can participate in the mission of spiritual love. And you have the same capacity. If Krishna wants to he can give you the power and it may come in different forms. For example I asked a mataji who is a good preacher to upload her lectures on Youtube. Or you can do like Paryatok Maharaj and give Bhagavad-gita lectures on Skype. He has a facebook profile and announces his classes there. Many devotees have done this on Skype.

Krishna consciousness has no limits. As a beggar of love you can go anywhere. The fact is that everyone who is dedicated to Krishna with all his heart will receive special mercy. Imagine, I don't have anything but I have everything. Like now when we are in this beautiful temple in La Serena. Krishna grants the sannyasis so much enjoyment. One must always continue with enthusiasm. I ask to you to equip yourself with sophisticated things for being a mendicant. When you ask someone to take a cd you are really begging from your heart. This is my message of sankirtan for today. I hope I reached your hearts, so you can walk happy and well equipped. And don't tell me you don't have 5 dollars to have all the cd's in your pocket. Be an equipped beggar. A devotee should be capable of managing a million dollars without being contaminated. It's not that someone gives you 1000 dollars and you want to escape to a casino. I hope you learn to support the Seva in a sophisticated way and organize very well the transcendental begging. 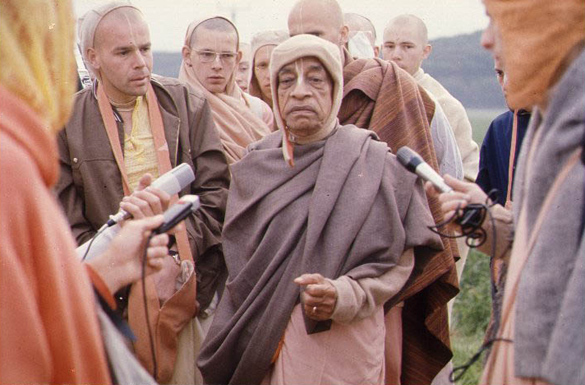