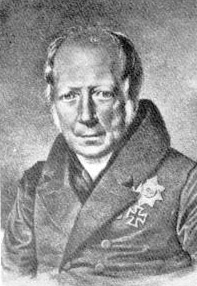 Wilhelm von Humboldt (1767- 1835) Prussian minister of education, a brilliant linguist and the founder of the science of general linguistics. Humboldt  began to learn Sanskrit in 1821 and was greatly moved by Schlegel's edition of the Bhagavad Gita, on which he published an extensive study. The Bhagavad Gita made a great impression on Humboldt, who said that " this episode of the Mahabharata was: "The most beautiful, perhaps the only true philosophical song existing in any known tongue ….perhaps the deepest and loftiest thing the world has to show."   He devoted to it a long treatise in the Proceedings of the Academy of Berlin (1825-6).

After looking into the Gita, he wrote to his friend, statesman Frederick von Gentz (1764 – 1832) in 1827:
“I read the Indian poem for the first time when I was in my country estate in Silesia and, while doing so, I felt a sense of overwhelming gratitude to God for having let me live to be acquainted with this work. It must be the most profound and sublime thing to be found in the world. “

He thanked God for having permitted him to live long enough to become acquainted with the Gita.

On June 30 1825, Humboldt lectured to the Berlin Academy of Sciences on the Gita, placing it firmly in the mainstream of the scholarship of the period. He found in the Bhagavad Gita his own "spiritual ancestors". What appealed to him was its originality and its simplicity. Krishna's doctrine, he wrote,

" …develops in such a peculiarly individual way, (and) it is, so far as I can judge, so much less burdened with sophistry and mysticism, that it deserves our special attention, standing as it does as an independent work of art…"

Humboldt studied Sanskrit with Franz Bopp in London. For Humboldt, Sanskrit with its wealth of grammatical forms is the climax of inflecting languages.

The Universal Gita: Western Images of the Bhagavad Gita a Bicentenary Survey – By Eric J. Sharpe
Vedanta: Heart of Hinduism – By Hans Torwesten An Evergreen Book. Grove Press. 1985
Philosophy of Hinduism – An Introduction – By T. C. Galav Universal Science-Religion.
The Bhagavad Gita – The Quest for the Moral Ideal, Religious Values and the Affirmation of Faith – By  P. Nagaraja Rao Madras 1986