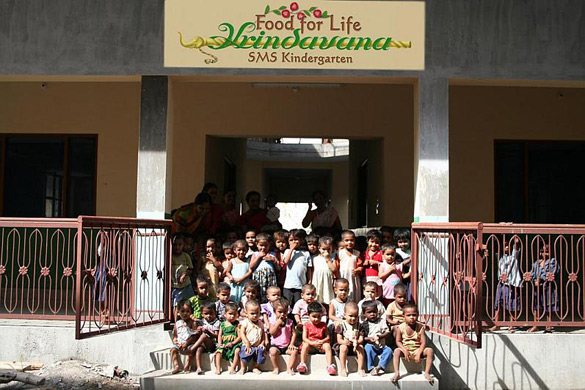 The third school is set to be bigger than the first two put together, and will serve an additional 1,500 children whose families cannot afford their education. Its launch festival will begin on October 21st with a stage program at the Sandipani Muni Intercollege (SMI) in Vrindavana.

At 9am on October 22nd, an auspicious ceremony, or yajna, will be held at the site of the new school, with another cultural program at SMI in the evening. A ground-breaking ceremony for the fourth Sandipani Muni School (SMS), being built at the sacred hill Govardhan, will be observed on the morning of the 23rd, while the late afternoon and evening will see the ribbon cutting and stage program for the Kikingala school’s grand opening.

SMS students will perform classical Odissi dance and folk dances, vocal music, and martial arts on all three days. The older boys will be involved in preparations for the event and in event security.

At least fifty guests from the UK, USA, and Europe will attend, as well as thousands of people from Vrindavana and surrounding villages. Bollywood actor Vivek Oberoi will be present at the opening ceremony, which is expected to draw the largest crowd.

“We hope that our SMS children will not only be benefited by FFLV’s programs, but grow to become responsible stewards of the unique heritage they have as Brajabasis, residents of Vrindavana,” says Visakha Dasi, Secretary to FFLV Director Rupa Raghunath Dasa. “We try to empower the children with academic knowledge, sound ethics and environmental awareness.”

The intention is that many of the students will continue their education beyond SMS. “We are doing everything we can to encourage with moral and tangible physical support,” Vishakha says. “We hope that they will not only become independent of FFLV, but that they themselves will become inspired to serve—to become capable of helping others, especially their own children and grandchildren, pursue education and a dynamic, joyful life.”

The Sandipani Muni School project began back in 2000 when Director and founder Rupa Raghunath Dasa decided that FFLV’s food distribution to Brajabasis in need was not enough.

“The only way to effect real long-term change is to provide education for the children,” says Vishakha. “Day-to-day life becomes extremely difficult when you are completely illiterate. The people coming to receive kichari at the Krishna Balarama Mandir could not read a clock, a calendar, or a street sign—what to speak of reading the Bhagavad-gita!”

So every evening, Rupa Raghunath and his team began to teach the alphabet and numbers to whoever showed up for prasadam. In 2002, they launched the Gift of Hope sponsorship program and opened a day school in a small rented house, teaching 120 children. In 2003, the first Sandipani Muni school—a primary school—was officially established in a new building with a student population of 250. By 2005 the school was completely functional with twelve classrooms and 450 children.

A second school, now known as Sandipani Muni Intercollege (SMI), followed soon after, in 2006. Just down the street from the primary school, it houses the kindergarten and nursery, and fourth grade through tenth grade classes. Every year, another grade is added to accommodate the students’ progression up to twelfth grade.

“It’s a beautiful modern building, which accommodates about 800 children and offers facilities for extracurricular activities like dance, vocal music, martial arts, yoga, tabla and mridanga, as well as computer and science labs,” says Vishakha. “We also offer vocational training in tailoring and embroidery for older girls.” When it’s opened in October, the third school will serve village children from rural areas such as Sundrakh and Kikinagla villages, as well as from Vrindavan town itself.

A fourth school, currently under construction, will be located near the sacred lake Uddhava Kund, and will serve the residents of Govardhan and Radhakunda villages.

“Our goal is to continue to expand, to reach out to as many children as possible,” Vishakha says. “We are currently working with donors and partners to maximize the quality of education and create opportunities to facilitate the growth of student perspectives on life—both inside and outside of the classroom.”