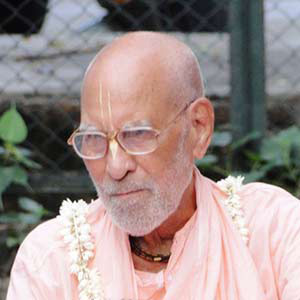 Krishna-bhaktas worldwide, regardless of affiliation, are saddened to hear of the deteriorating health of His Holiness Sri Srimad Bhaktivedanta Narayana Maharaj, who has been diagnosed as suffering from inoperable (metastasized) stage-4 colorectal cancer. According to a posting by B.V. Madhava Swami & Brajanath das, a biopsy has shown that the tumours in his colon and small bowel are malignant and in an advanced stage, and doctors have concluded that it is too late for chemotherapy or radiation therapy to be of much use now.

Though he is advanced in years, being just five months shy of 90, Srila B.V. Narayana Maharaj has continued until very recently as an active Gaudiya Vaishnava leader — writing, translating and publishing books; delivering numerous lectures; travelling widely; opening temples and preaching centres; and inspiring devotees worldwide with what is possible to achieve when one's heart is surrendered to Lord Krishna and to his or her Spiritual Master.

Now Srila Narayana Maharaj must perforce curtail many of his activities and take the advice of competent physicians, who have instructed him to rest. Maharaj is expected to remain in hospice care at Sri Sri Radha Raman Bihari Gaudiya Math in New Delhi.

Srila Narayana Maharaj has served the Gaudiya Vaishnava community as a sannyasi for an astonishing 58 years. He has translated into Hindi and overseen the translation into English of several important works of our parama-paratpara-gurudeva, Srila Bhaktivinoda Thakur, including Jaiva Dharma, Sri Caitanya-siksamrta, Bhakti-tattva-viveka and Vaisnava-siddhanta-mala. He has also compiled a wonderful Vaishnava songbook, Sri Gaudiya Giti-guccha; written a comprehensive biography of his own gurudeva, Sri Srimad Bhakti-prajnana Kesava Goswami; and translated Srila Visvanatha Chakravarti Thakur's summary of the Nectar of Devotion, the Sri Bhakti-rasamrta-sindhu-bindu. Certainly all Vaishnavas, regardless of denomination, must salute his devotion and scholarship.

We at Chakra join devotees worldwide, within Srila Prabhupada's ISKCON and within Srila Narayana Maharaja's Sri Gaudiya Vedanta Samiti, as well as Vaishnavas everywhere, in lighting a candle and praying to Sri Giriraja Govardhana for Srila Narayana Maharaj and for his comfort during his remaining time among us. Let us put an end to party feelings, camp divisions and recriminations, and let us join in kirtan all as one, wherever we may be: tana-mana-jivana, guru-pade arpana, sri harinama ratan ("Offering my body, mind and very life to the feet of my spiritual master, I incessantly sing the Holy Name." — Guru-Carana-Kamala Bhaja Mana 4)

As a pure Vaishnava, Srila Narayana Maharaja's destination is known; he will unquestionably be welcomed Back to Home and Back to Godhead. As Jaiva Dharma declares: "Surrender of self is said to be the ninth part of devotion; surrender of pure self, including even the body, to Sri Krishna is called self-surrender. Doing nothing for one's own self, doing everything for Sri Krishna — this is the criterion of self-surrender." (Ch. 19, p. 284)