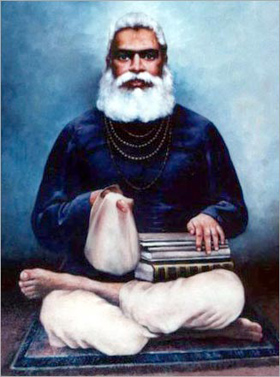 The Appearance Day of Srila Bhaktivinoda Thakur is observed on September 20th.

"Thakur Bhaktivinode, the writer of this little volume, was born at Ula – once a very prosperous village in the district of Nadia. To the public he was a very competent and renowned member of the Bengal Provincial Civil Service and Royal Asiatic Society of Great Britain and Ireland.

To the devotees of Shree Bhagaban, the Supreme Lord, Thakur Bhaktivinode is a personal and eternal devotee of Shree Bhagaban, appearing in a human form in obedience to his Lord's happy will of pumping off the stagnant and insalubrious waters of the channel of pure devotion, casting off the dregs and thus putting a stop to the decay of righteousness and exaltation of unrighteousness, whereby the real devotees are protected and apparent ones disappear. He fulfilled his Master's will by establishing pure and unflinching devotion to Shree Bhagaban and by fully and gladly adopting in his own life the true and highest ideals of Bhakti (service, devotion) and propagating them in speeches and writings of which these pages are but a short and faint gleam. His (1) "Sajjanatoshani" (a monthly), (2) "Jaiva Dharma" (the natural and inherent religion of the soul or Jiva), (3) "Shree Chaitanya Sikshamrita" (the sweet teachings of Shree Chaitanya Deva), (4) "TattvaSutra", "(5) "Shree Bhagabatarka-marichimala", (6) "Bhajan-Rahasya", (7) "Shree Krishna Sanhita" (8) "The Bhagabata Speech", (9) "The Goutama Speech", (10) "The Muts of Orissa", (11) "Commentaries of Shree Chaitanya Charitamrita", (12) "Kalyana Kalpataru", "Gitabali," "Saranagati" etc. are all living monuments of his real kindness to us.

Thakur is a faithful and obedient servant of the Supreme Lord. These few pages on his Lord's Life and Precepts are neither scribbling of an imaginative pen nor the produce of the hack-writer's den, but the actual display of Thakur's eternal and constant devotion. His own doings and sayings are but embodiments of these precepts. Chaitanya Mahaprabhu is his riches. Chaitanya Mahaprabhu is his property – his all in all.

Thakur adopted fully in his own life the precepts of Chaitanya Mahaprabhu and proved wonderfully and brilliantly that attachment in the garb of perfect indifference, as is characteristic in the monkeys, is detrimental to pure devotion and that this world can not obstruct the flow, and cloud the display of devotion in him who has the good luck of gaining the graceful favours of a Sad-guru (a preceptor submerged in devotion and thus versed in the principles of the Veda) and surrendering himself fully and sincerely to Him.

The precepts of Chaitanya Mahaprabhu are embodied in eight slokas uttered by Himself at Puri, which go by the name of Sikshastaka. Thakur practices in his own life Shikshastaka. He proved that mechanically humiliative bending of the body is not the inherent humility of a devotee, and that seeming abstinence from eatables, etc., is not devotional apathy. He nicely avoided the two extremes of attachment for and detachment from all objects of enjoyment. His boldness, strictness and sternness in accepting and establishing real devotion and dispelling the apparent one are rarely found. Those, who being fathers of children and living in their midst shrink at the very thought of devotion and faint at the mention of renunciation, may find solace enough in the life of the Thakur who established before the world the ideal life of devotee, and proved that Bramacharyya and Sanyassa are not incompatible with the life of a house-holder (Grihasta) and that performing worldly duties bar in no way the Brahmacharyya and Sannyasa of a devotee.

Thakur was visible in this world from 1838 to 1914. In this span of seeming birth and death all his activities were directed towards removing the eternal distress of the human-kind the eternal oblivion of the real blissful condition of the soul and its consequent stuporous identity with the body and the mind and weeding out the field of devotion, as a result of which the sham devotees are being brought to book, and the real places of the birth and earlier pastimes of Shree Chaitanya Mahaprabhu been brought to light. It was Thakur Bhaktivinode who located the holy birth-site of Shree Chaitanya Mahaprabhu at Shree Mayapur, a village in old Navadwip, on the eastern bank of the Ganges, and pointed out its false and prevalent identification with the present town of Nadia or Navadwip which is Kulia of Koladwip, one of the nine islands of Navadwip. The old city of Navadwip was fabulously prosperous and populated and one of the greatest centres of Sanskrit learning. The circumference of this city is thirty-two miles, and it consists of nine islands; —

All these nine islands are circumambulated every year in nine days just before the full moon in Falgun — the advent-day of Shree Chaitanyadeva – under the lead of the present editor of the booklet, when hundreds of pilgrims from different parts of India flocks together and visit the places of interest.

In fine, I invoke the devotees of Shree Chaitanya Mahaprabhu and Himself Whose mercy and blessings only will melt the seal of their works.

"We salute over and over again all His devotees who are to us like so many 'purpose-trees' yielding the fruition of all our devotional desires, who are oceans of kindness and purifiers of the fallen."

"We salute Him Who is the most munificent – the free giver of the love of Krishna – Who is Krishna Himself and Whose name is Krishna Chaitanya and the glow of Whose body dims the lustre of burning gold."