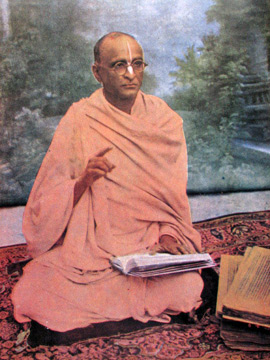 Before acquiring material designations, the living entity is supremely pure. Even though he is not engaged in serving the Supreme Lord, he remains situated in the neutral position of santa-rasa due to his marginal nature. Though the living entity born from the marginal potency does not at that time exhibit a taste for serving the Lord due to a lack of knowledge of self-realization, his direct propensity of serving the Supreme Lord nevertheless remains within him in a dormant state. Though the indirect propensity of material enjoyment, which is contrary to the service of the Lord, is not found in him at that time, indifference to the service of Hari and the seed of material enjoyment, which follows that state of indifference, are nevertheless present within him. The living entity, who belongs to the marginal potency, cannot remain indifferent forever by subduing both devotional and non-devotional propensities. He therefore contemplates unconstitutional activities from his marginal position. As a sleeping person dreams that he is active in the physical world without actually being involved in activities, when the dormant indifferent living entity of the marginal potency exhibits even a little apathy to the service of the Supreme Lord and situates himself in a neutral, unchanging condition for even a little time, he is infected by impersonalism. That is why the conditioned soul desires to merge in the impersonal Brahman, thus exhibiting his mind's fickle nature. But due to neglecting the eternal service of the Lord and thereby developing the quality of aversion to the Lord, he cannot remain fixed in that position. In this way aversion to the Lord breaks his concentration of mind and establishes him as the master of this world of enjoyment.

Due to being situated in the marginal position, living entities who are averse to Hari assume the nature of mixed consciousness; in other words, when the marginal energy living entities mix with the external energy, they consider themselves the enjoyers and then enter the material world. The cause of the spirit soul's coming to live in this world in aversion to Krsna is his misuse of his free will. When this aversion becomes strong, the living entities accept a material mind and body in order to enjoy the temporary material world and thus come under the control of fruitive reactions. And when, on the strength of pious activities, they become transcendental to the varnasrama principles, which distinguish superior and inferior behavior in this world, they become paramahamsas by perfecting themselves through sadhana. Those who become paramahamsas are the Hari-janas. And those who fall from the platform of paramahamsa and engage in fruitive activities while associating with matter are situated on the platform of varnasrama.