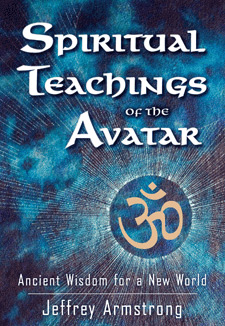 Jeffrey Armstrong is known to many of us older devotees as Jamadagni das, a disciple of Srila Prabhupada and the lyricist for many of the songs by Mangalananda dasa. He has been working in his own way for years to spread the teachings of Vedic Dharma and Krishna consciousness. He has been quite innovative and uses many of his ideas to interest others to understand the value and contributions of the Vedic wisdom and to take an interest in it. He has now produced a book that is opening many doors into the commercial market place to reach as many people as possible and draw them into the wisdom that the Vedic teachings have to offer in this topsy-turvy world. The book has already gone into a second printing before it has even reached book stores. It is also being published in Italian, German and Russian, and has presently risen to one of the best sellers on the Amazon.com sales list.

This book is probably the best opportunity in years for the Vedic wisdom to enter into the midst of Western readers of all kinds and pique their curiosity, and also emphasize the importance of Vedic culture to young and older Indians alike. What is this book? It is called The Spiritual Teachings of the Avatar: Ancient Wisdom for a New World.

In Spiritual Teachings of the Avatar, author Jeffrey Armstrong enlightens readers on the meaning of the word Avatar and relevance of the original Avatars of India in today’s world. An Avatar—a Divine Being that descends from the transcendental realm to restore peace and harmony to the earth—is a manifestation of the Ultimate Being that can appear at will in human or animal form. According to Indian tradition, when Mother Nature has been harmed by the actions of humans, Avatars come to Earth to restore the karmic balance while showing humans the way back to the higher realms.

Collected from Vedic spiritual traditions of India that can be traced back more than 5,000 years, Armstrong illuminates how contemporary cultural references to Avatars reveal their deep and enlightening historical roots. At the heart of these teachings is a respect for all life, the concept that we are each part of the same Ultimate Being, and that everyone is able to makes the journey back home to the Divine. With the social, economic, environmental, and political unrest in the world today, these lessons from the Avatar are more important than ever.

Spiritual Teachings of the Avatar speaks to anyone concerned with the sustainability of Mother Earth, the role of elders in our society, the seemingly unconsciousness of science and corporations, and the subtleties of unseen realities, resulting in spiritual growth, a deeper relationship with nature, and a better world for all. In Spiritual Teachings of the Avatar, Vedic expert and teacher Jeffrey Armstrong explains the ancient Indian wisdoms embodied in the word “avatar,” and that behind the notion of avatar is a view that sees the sacredness of all life and the soul of all beings as eternal—meant for freedom and made of divine essence.

The Academy Award-winning film, AVATAR brought into world prominence one of the most important spiritual words of India, prompting audiences to wonder, "What does avatar really mean?" Armstrong explains that though the stories on which the Avatar teachings are based originated more than 5,000 years ago, they have re-emerged in the modern world for good reason.

"Jeffrey Armstrong has shown how the new avatar awareness and the ancient and eternal avatar consciousness can be united for individual and global transformation. And he has done so with poetry, humor, intelligence, wit and grace. A book that will open the doorways to many higher dimensions, new hidden horizons, new worlds of delight and new ways of vision." ~ David Frawley, director, American Institute of Vedic Studies

"The concept of imagining that you are not your thoughts, thus you are not even your "imagination", sets the premise for an exploration of the deepest spiritual questions. Rooted in an awareness of the true nature of consciousness, Jeffrey awakens our intuition to what it has forgotten. Many namaste's" ~ Terry McBride, founder of YYoga

"I truly enjoyed the unfolding of our ancient Hindu/Vedic culture and philosophy finding a fresh voice. Armstrong gallops through pretty much every social, political, scientific, religious issue currently engaging and outraging the human race, from the Transcendental to the dirt real. I so admire what has been has accomplished here." ~ Paramacharya Palaniswami, Editor-in-Chief Hinduism Today

At a recent event in Ottawa Canada Swami Ramdev publicly endorsed the book and honoured Armstrong for his work on behalf of the international Hindu culture and community. In Spiritual Teachings of the Avatar Armstrong informs the reader about the greatness of India and the real meaning of Avatar. The book speaks to Hindu students and youth in a contemporary way giving them new tools to clearly explain their culture. Swami Ram Dev said: “Everyone should read this book.” Included in the book are two brief summary chapters explaining the great epics and Avatars of India: The Ramayana and the Mahabharata. Sri Sri Ravi Shankar also received a copy during his visit to Vancouver Canada this past week.

Armstrong has studied Vedic knowledge for over 40 years and has explored the depths of many of the greatest teachings of India as both a practitioner and scholar. He is a westerner who has been selected by Hindu leaders throughout the world to act as a spokesperson for Hindu Dharma and culture.
The book is published by Atria Books/Beyond Words Publishing, an imprint of Simon & Schuster in all global markets (978-1-58270-281-0; 224 pages, $22.00 US). It features 16 color illustrations by Society of Illustrators Gold Medal-winning cartoonist Farel Dalrymple.