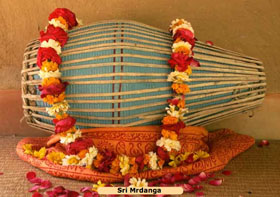 The purpose of kirtana is to please Govinda. A crucial question arises: Will kirtana performed with slaughterhouse Mrdangas please Govinda?

Sri Mrdanga is a sacred two-headed clay drum that is exclusively used to accompany devotional hymns chanted for the pleasure of Sri Govinda. The two heads as well as the bands that stretch them are traditionally made from the hide of a cow that died a natural death. Such hides are termed ahimsa indicating they are obtained without violence.

Ahimsa leather distinguishes Sri Mrdanga from slaughterhouse Mrdangas which use leather obtained by violence (himsa). This significant difference is vital as cows are Sri Govinda’s favorite creatures and He does not tolerate their abuse. Sri Govinda considers cows worshipable. Mrdangas are mostly fabricated in Sri Navadvipa Dhama and Sri Vrindavan Dhama, the foremost places of pilgrimage for devotees of Krsna.

It is a known fact that India hosts more cows than any other country and is still well known as the place where the cow is considered sacred. Indeed in rural India, many Hindu families keep cows and regard them as their family members. It is not uncommon that cows and calves are kept in the house and often treated as pets. Thus when a family cow dies of old age, the leather can be used to make Mrdangas, harnesses for oxen and horses and other such purposes. In times past ahimsa leather was not hard to get.

However, with the advancement of Kali Yuga the Vedic culture is on the wane. The residents of India are losing their culture as Western values are being foisted on them by the mass media. One significant indicator of this trend is the fact that India is surprisingly the second largest exporter of beef in the world and aspiring to become the leading exporter of cow leather. Surprising, because cow slaughter is against the law in most Indian states…

As indicated in several of our previous Newsletters, illegal abduction of cows in India is commonplace. Cows are transported in inhumane ways to make-shift as well as modern slaughterhouses to be processed for their meat and skin. Thus whatever leather we find commercially available today is obtained from the brutal mistreatment of cows.

I am aware of only one source of ahimsa leather in Vraja, and it does not come close to supplying the increasing demand for Mrdanga heads. Thus the vast majority of leather available today is himsa, and therefore unacceptable for making Mrdangas.
During the last forty years there has been extensive international propaganda to Kirtaneers playing Sri Mrdanga Inhumane transportation of cows Krsna regards the cows as more important than the brahmanas educate people regarding the worship of Lord Krsna in the process of kirtana as taught by Lord Sri Krsna Caitanya Mahaprabhu. The result of the propaganda is a growing interest in performing kirtana which of course increases the demand for Mrdangas.

The increased demand for Mrdangas prompts an increase in production but unfortunately the profit motive prevents the manufacturers and buyers from questioning the sources of the leather they purchase. While the hide-sellers may claim their leather is ahimsa, it does not serve the business of the Mrdanga makers to investigate the veracity of their claims. Since Mrdangas made with ahimsa leather appear exactly as those made with himsa leather, what results, at best, is an unspoken agreement not to inquire into the source of the leather, or at worst, the formation of quite astonishing yet effective rationalizations which allow all parties concerned to indulge in the production, sale and use of slaughterhouse Mrdangas with a clear conscience.

Since ahimsa leather sources are sparse and himsa leather sources abundant, any simpleton can conclude that the great majority of commercially produced Mrdangas are products of the slaughterhouse and thus unfit to use in glorifying Govinda. We must dupe ourselves in order to justify purchasing and using slaughterhouse Mrdangas. In short, to deal in the Mrdanga trade today there is a desperate need for self- deception. What are the alternatives? Buffalo, camel and goat leather are also available but are rejected because they are not as soft and do not produce as “sweet” a sound… and of course the nagging question still lingers if those hides are obtained without violence. If they are obtained by violence, they are also unsuitable. Synthetic drum heads are a safe alternative but they are looked down upon by musicians with distinguished ears for they do not sound as “sweet”.

But to whom do they not sound as sweet? To the musician, or to Krsna? Is it the sound of the drum that pleases Krsna, or is it the devotion with which His names are chanted? Since the purpose of kirtana is to please Krsna, the crucial question is: Does kirtana performed with slaughterhouse Mrdangas please Him? Does He accept such glorification? That people use slaughterhouse Mrdangas clearly reveals that their priorities are not proper.

In the Nectar of Devotion we read that Ganges water touched by fingernails is not fit for bathing the Deity; nor is a flower kept in an unclean pot fit to be offered to Him. In Ramayana we read how Vasistha requested Lord Rama to defeat the rakshashas who kept polluting the sacrificial arena to prevent the sage from completing the yajna effectively. Are not slaughterhouse Mrdangas polluted? If so, is not the kirtana yajna thwarted by their use? We do not use shoes, wallets, belts or clothing made from slaughtered animals. We shun ghee polluted with animal fat; milk mixed with chemicals and chalk; sweets with contaminated silver foil; but we accept slaughterhouse Mrdangas?

Some argue that the cows are largely slaughtered for meat and that the skins are only a by-product. This is at best an uneducated guess as even in Vraja trucks have been arrested full Is it the sound of the drum that pleases Krsna, or is it the devotion with which His names are chanted? of calves whose skins are much sought after by the shoe industry.

Others argue that since the cows are being slaughtered for meat, if we use their skin in the glorification of the Lord, at least they will get some benefit despite their unfortunate end. This insidious rationalization cloaks the sin of animal slaughter in the virtue of mercy, its opposite. It’s a scriptural fact that animal slaughter and meat eating destroy mercy, one of the pillars of religion. Boycott slaughterhouse leather to decrease the demand for cowhide

Would we claim that killing our innocent mother and offering the inheritance for religious purposes would serve her benefit? Why wait until the cows are slaughtered to benefit them? Why not benefit them by preventing their slaughter? Why not benefit them by protecting them and using their milk, dung, urine, ghee and yogurt in the service of the Lord while still alive? Why not boycott slaughterhouse leather to decrease the demand for cowhide and in this way be part of the solution instead of part of the problem?

Certainly the above options indicate greater concern for cows than those arguments which claim to benefit them by using their skin for Mrdangas. By purchasing slaughterhouse Mrdangas we increase the demand for cowhide and thus encourage slaughter and become implicated. This thoroughly defeats the purpose of kirtana, which, again, is to please He who gives pleasure to the Cows.

If we are accomplices to cow- killing, how can we claim to be devoted to He Who pleases the cows? The best course of action is to obtain ahimsa leather to make Mrdangas. If ahimsa leather is not available, we should use synthetic drum heads until it is.

We should be prepared to protect cows until they die a natural death and in this way acquire enough ahimsa leather to fulfill our requirements.

If we insist on using slaughterhouse Mrdangas and do not concern ourselves with whether or not Krsna is pleased by it, we slip on the razor’s edge and stumble into niyamagrahaha — following the rules and regulations only for the sake of following them and not for the sake of spiritual advancement. Rupa Gosvami declares this to be one of the six faults that destroys Bhakti.

And if despite knowing how the cow suffers pain and fear after her throat is slit and she lies bleeding to death; how her body quivers after being disemboweled and having her hide ripped off; and if after all that, we stretch her skin over the clay shell and tune it to our fancy until it sounds “sweet,” we have achieved a level of insensitivity which indicates we have already lost the quality of mercy and are well on our way in becoming irreligious despite our well- meaning and wholehearted participation in kirtana.

If you would like to contact or support Care for Cows in Vrindavan please email Kurma Rupa prabhu at: kurmarupa@careforcows.org