Srila Prabhupada was instructed by his spiritual master, Srila Bhaktisiddhanta Sarasvati Thakura, to preach Krsna consciousness to the English−speaking peoples. Toward this end, His Divine Grace A. C. Bhaktivedanta Swami published the first Back to Godhead magazine in 1944. He also began to write translations and commentaries on Bhagavad−gita, Srimad−Bhagavatam, Caitanya−caritamrta, and other Vedic literatures. In 1965, after publishing three volumes of Srimad−Bhagavatam, he approached the owner of the Scindia Steam Navigation Company, Sumati Morarji, for a complimentary passage to the United States. After considering his request for some time, she finally agreed and issued him the ticket. 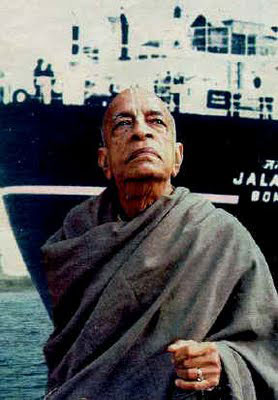 In the port of Calcutta on August 13, 1965, carrying only a small suitcase, an umbrella, and a bag of dry cereal, A. C. Bhaktivedanta Swami, as he was known at the time, climbed up the steep gangway onto a cargo ship named the Jaladuta. The ensuing journey presented considerable hardship. Srila Prabhupada wrote of some sea−sickness, and on the thirteenth day of the voyage, during the passage through the Arabian Sea, he suffered a massive heart attack. He was concerned that he might pass away, but in his uneasy sleep that night he had a dream, a vision. Lord Krsna appeared.

The Lord was in an open boat, along with His other incarnations. Krsna was rowing the boat, and the boat was pulling Srila Prabhupada's ship with a rope. Krsna was smiling at Srila Prabhupada and was pulling the ship all the way to America! Srila Prabhupada did not write about this occurrence in his diary but simply drew a line through those troubled days, declaring that he had passed over a great crisis in the struggle between life and death. Years later he related these events to his followers.

After the crisis, Srila Prabhupada regained his strength and recommenced his entries in the diary after the ship docked in Port Said, Egypt. Then, after crossing the Mediterranean Sea, the Jaladuta passed through the Straits of Gibraltar and into the Atlantic Ocean. Uncharacteristically, the ocean appeared like a placid lake. The Atlantic crossing was so effortless that the ship's captain remarked that he had never seen anything like it.

After a total of thirty−five days the ship at last berthed in Boston, at Commonwealth Pier, on September 17 at 5:30 a.m. The next day the Jaladuta continued to New York, where Srila Prabhupada disembarked onto a lonely Brooklyn pier to begin his mission in the West.