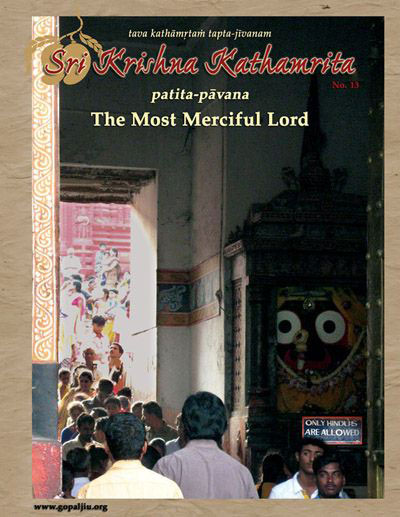 Gopal Jiu Publications is pleased to announce the release of issue #13 of Sri Krishna Kathamrita magazine, "The Most Merciful Lord".

Lord Jagannath in Puri is celebrated as Patita Pavana, the savior of the fallen. With new research work, traditional art, and translations of little-known Oriya scriptures, this issue of Sri Krishna Kathamrita looks at the history of the extraordinary kindness Patita Pavana Jagannath has shown on so-called “low-caste” devotees as well as those who are genuinely fallen. It also examines why, if Lord Jagannath is so merciful, the policy of his temple in Puri is to bar entrance to foreigners and others.

* WHAT NO INCARNATION EVER GAVE BEFORE
His Divine Grace A. C. Bhaktivedanta Swami Prabhupada explains the amazing mercy of Sri Chaitanya Mahaprabhu as described in the famous anarpita-carim cirat verse from Caitanya-caritamrita.

* THE ORIGIN OF THE DEITY OF PATITA PAVANA
Devotees and historians are unsure about the origin of this deity of Jagannath by himself who stands inside the gate of the temple in Puri. This article explores the stories of the most-cited versions, and in particular the account that he appeared for Ramachandra Dev II, the devotee king of Puri who was barred from the temple after being forced to convert to Islam.

* JAGANNATHA’S MUSLIM DEVOTEE: BHAKTA KAVI SALABEG
It’s ironic that the person who is perhaps the most famous devotee of Jagannath in all of Orissa was denied entrance to Jagannath’s temple due to his Muslim birth. The life and songs of Salabeg reveal the heart of a devotee, who, finding himself alone and bereft of anything else, piteously cried for the Lord.

* DASIA BAURI, JAGANNATH’S OUTCASTE DEVOTEE
Like Salabeg, Dasia Bauri was considered low-caste due to his birth and was denied entrance to the temple of Jagannath in Puri. Yet the extraordinary mercy Dasia received from the Lord has rarely been obtained by anyone in this world.

* JAGANNATH’S MERCY ON AURANGZEB
The Muslim ruler Muhiuddin Muhammad Aurangzeb (1618-1707) is infamous in Indian history for his religious atrocities. Aurangzeb was a breaker of deities and temples. Yet, unknown to most people, he once had a vision of Lord Jagannath, after which he donated some property to the Lord.

* THE DAYANA FESTIVAL OF LORD JAGANNATH
This little-known festival takes place at the Jagannath Vallabha Gardens in Puri at midnight on the thirteenth day of the bright fortnight of the month of Chaitra. The ceremonial deities of Balaram and Krishna steal some bunches of the sacred dayana plant, and the next morning are locked up in a room all day for their mischief. The article includes the story behind the event, as well as mantras, procedures, and rare photos from the festival in Puri.

* THE ORIYA POET DINA KRISHNA DAS
An introduction to the life of one of the most famous Gaudiya Vaishnava poets of Orissa.

* JAYA JAYA JAGANNATH!
A first-time translation done for this issue of Krishna Kathamrita of a popular song by Dina Krishna Das that is recited daily in the Jagannath temple in Puri.

* INJUNCTIONS REGARDING ENTRY
Another first-time translation, this article consists of excerpts from the Sanskrit sthala-purana known as Niladri-mahodaya. These verses are the standard followed in Puri regarding who should not be allowed inside of the temple, and the procedures that should be followed if somehow they enter.

* JAGANNATHA’S BRITISH “GUARDIAN”
Paradoxically, the formal policy of the Jagannath temple to not allow foreigners or outcaste people originated with a law enacted by British “foreigners”. This article looks at the unusual story behind this policy.

* FAMOUSLY REFUSED
If one examines the history of the temple of Jagannath over the last few hundred years, they may be surprised to see who has been denied entrance, who has refused to go in, and who has been allowed.

* THE OPULENCE OF PURI
According to Gaudiya Vaishnava philosophy, knowledge of the Lord’s power and opulence makes love shrink. For this reason, the followers of Sri Chaitanya Mahaprabhu aspire for eternal service in Vrindavan and are not interested in the Lord’s opulent abodes such as Dwarka and Vaikuntha. Also, there are two divisions of the Lord’s holy names — primary and secondary. The primary names describe the Lord’s pastimes, while the names describing the Lord’s relationship with the material world are secondary. The primary names lead to love of God, while the secondary names bring piety and liberation. “Jagannath” and “Patita Pavana” are secondary names, and Puri is a place of great opulence. Understanding this, why did Sri Chaitanya Mahaprabhu, who is in the mood of Srimati Radharani, come to Puri, and why did he address the Lord there as “Jagannath”?

* ONLY HINDUS ARE ALLOWED
This piece presents some surprising, and occasionally amusing, pastimes of Lord Jagannath involving the policy of barring entry into the temple. It includes first-time translations done especially for this issue from the Sanskrit sthala-purana Vamadev Samhita, describing what happens to Jagannath’s wife Lakshmi when her husband leaves to visit his gopi girlfriends at Gundicha, Vrindavan. This article sheds a whole different perspective on the popular festival of Ratha-yatra.

Ordering information and excerpts for this issue are available at:

To browse and order other books and magazines from Gopal Jiu Publications, please visit: