Vyasa-Purnima was celebrated grandly at Sree Chaitanya Gaudiya Math, 35 Satish Mukherjee Road, Kolkata. His Divine Grace, Srila Bhakti Ballabh Tirtha Goswami Maharaj, President-Acharya, blessed the devotees with His inspiring discourse. Devotees from all over India and abroad had come to offer Pushpanjali. The highlight of the program was the Guru-Puja with Arati offered by the devotees to Param-Gurudeva and Gurudeva. 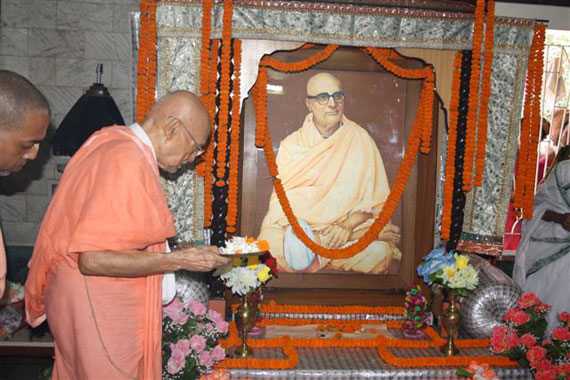 The whole setting vibrated with sankirtan performed ecstatically by the inmates of the Math. Householder-devotees offered various preparations of flowers, fruits, etc. Many devotees from all over the world witnessed the event over live webcasting. Devotees from countries like USA , England , Germany , Slovenia , Russia and Australia participated in the webcasting.

His Divine Grace Srila Bhakti Ballabh Tirtha Goswami Maharaj spoke about the great spiritual contributions of His Gurudeva, His Divine Grace Srila Bhakti Dayita Madhava Goswami Maharaj, especially his acclamation of the birth-place of Srila Prabhupada and the establishment of a Math. Gurudeva also mentioned how He met His Gurudeva and how He joined the movement in 1946 in great detail. He highlighted Guru-tattva, the significance of the Spiritual Master and how one should follow Gurudeva’s teachings practically. While glorifying Sri Sanatan Goswami, whose disappearance day happens to be on the same day as Sri Guru Purnima, Srila Gurudev explained how he revived Sri Vrindavan Dham. 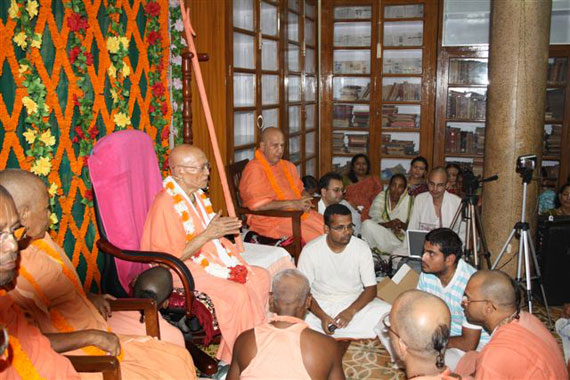 Guru-Purnima is the appearance day of Sri Krishna Dvaipayan Vedavyasa, the author of Mahabharata (including Bhagavad-Gita), the eighteen Puranas, and Vedanta, so on and so forth. The son of Parasara Muni and Satyavati, Vedavyas appeared five-thousand years ago in Krishna-Dvipa. All the followers of Sanatana-Dharma: Karmis, Jnanis, Yogis, Bhaktas are observing Vyasa-Purnima today. All Guru-Parampara, the preceptorial channels are coming from Vedavyas. Srila Prabhupada Bhaktisiddhanta Sarasvati Goswami Thakur, the original founder of the Gaudiya Math, used to observe Vyasa-Purnima, by performing Guru-Puja, the tradition followed by all his disciples till date. The program terminated with Sankirtan, followed by sumptuous, very delicious maha-prasadam.

Your in the service of the Supreme Lord,