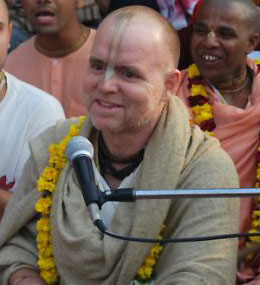 Devotees from all around the world are mourning the passing of His Grace Aindra Prabhu, the leader of the 24-hour kirtan at the Iskcon Krishna Balaram temple in Vrindavan, who entered Radha and Krishna's nitya-lila this morning at 7.15 AM.

He was found in his room doing dandavat pranams in front of Goura Nitai, his personal deities. A devotee, who always helped him to serve his deity, tried to open the door this morning, but when there was no answer, he had the door broken open, and Aindra Prabhu was found lying in silent obeisances before the Lord.

His Grace Aindra Prabhu, a direct disciple of A. C. Bhaktivedanta Swami Prabhupada, was in charge of the 24-hour kirtan at ISKCON Krishna Balaram Mandir as ordained by Srila Prabhupada. His sincere devotion and commitment generated a pure spiritual atmosphere in the temple and strengthened perfect devotion in the minds of all visitors to the holy abode.

Aindra Prabhu received Harinama diksha in 1973 in Washington D.C. For many years he served as a pujari at the temple and regularly engaged in Harinama sankirtan and book distribution. After several visits to Vrindavan Dham, he was inspired to revitalize the 24-hour kirtan which had originally been started at the Krishna Balaram Mandir in 1975.

In 1986, Aindra Prabhu came to establish himself permanently in the Holy Dham, from which time he fully committed himself to the service of the Holy Name in the form of Maha Mantra kirtan, inspiring thousands of devotees from India and around the world with his great enthusiasm and melodious chanting. His wonderful devotional recordings have spread far and wide, bringing joy to the hearts of thousands of devotees.

May your chants remind you of Vrindavan and the blessings of Radharani and Shyamasundar be with you forever. We cherish your glories always in Vrindavan and may you live forever in the memories of all the devotees of Vrindavan. May you be ever absorbed in the glorious pastimes of Radha Krishna, always singing their holy names for their pleasure in the nitya lila.