The main flora and fauna of the Vedic texts, back to the Rig Veda, is that of India. The flora in the Rig Veda includes such typical Indian species as lotuses (pushkar, padma), bamboo (vaamsha), durva, shara, and munja grasses, khadir, kimsuka and shalmali trees. The Vedic sacred fire or Agni is enkindled with the wood of two sacred trees, the ashvattha and the shalmali, both native India species and both mentioned in the Rig Veda. The ashvattha known as Ficus religiosa is the most sacred of the Rig Vedic trees as it is that of the Upanishads and later India. It is still sacred. 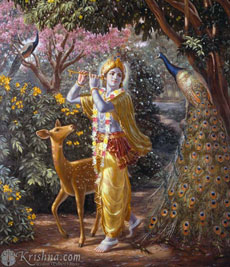 The fauna of the Rig Veda is yet more obviously Indian including peacocks (mayur), swans (hamsa), water buffalos (mahish), gaura (another type of buffalo or the Indian bison), camels (ushtra) and elephants (hasti) – all of which are common to the region. The Atharva Veda, which mentions more species, features the whole array of India's plants and herbs and other animals. Harappan seals contain images of these same plants and animals. The species of plants and animals depicted on Harappan seals are the same as those found in the Vedic literature.

The climate mentioned in the Rig Veda reflects a great monsoon, with rain deities like Indra and the Maruts taking prominent roles in the Rig Veda hymns. The Vedic geography is of a land of many rivers, many mountain ranges, deserts, wide forests and the sea, much like India today. Agni, the Vedic fire deity, is often specifically a deity of the forests.

We don't find any significance given to a cold climate or Central Asian plants and animals, which would be the base if the Vedic people had come from that region. The Rig Veda has nothing in common with the proposed Proto-Indo-European homeland of birch forests and steppes of Central Asia. There are no statements in the Rig Veda, like those in the Bible, of a group of people coming in from a far off region. There is, on the contrary, an immemorial regard for the motherland of great rivers, the Sarasvati homeland.