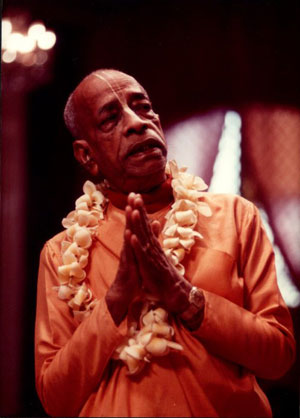 1. On this day, O my master, I made a cry of grief; I was not able to tolerate the absence of my guru.

2. On this auspicious day I have come with this offering just to worship you, remembering your lotus feet.

3. Sri Chaitanya Mahaprabhu's judgment is that renunciation is most important. Not only that, but such knowledge of renunciation must be delivered to every conditioned being.

4. The beginner in devotional service has no ability to solve this dilemma, but you are a maha-bhagavata, you have given us direction.

5. One bewildered by ignorance, what kind of renunciate can he be? He will only be a "phalgu-vairagi"; renouncing externally.

6. Renunciation is actually the result of real spiritual emotion. Without such feeling it is simply known as "show bottle".

7. But there is another "show bottle" for the purpose of preaching. That is the Lord's sannyasa by which the mayavadis are defeated.

8. Lord Chaitanya's philosophy is beyond Varnasrama; it is Bhagavata dharma, for putting an end to all cheating processes of religion.

9. Performing dry renunciation, there can be no real preaching. Therefore "yukta vairagya" is given as the highest essential understanding.

10. "That sannyasa which I have given you" is for preaching in devotion. The faithless sense enjoyers are unable to understand this.

11. Generally the sannyasis renounce everything and go and stay in the mountain caves, but you, o master, keep your sannyasis in mansions of marble.

12. To see a sense enjoyer is just like drinking poison, but you, o my master, go far and near, even abroad, to give them your darshan.

13. Mlecchas and Yavanas are forbidden to enter the Hindu temples, but you my Lord, make them chairmen and sit them in the assembly of devotees.

14. Hindus are not allowed to cross the ocean, but you send your devotees overseas to preach.

15. In the cities of Kali Yuga the instructions of the bona fide spiritual preceptors are forbidden. Still you remain there in any way possible.

16. The devotees want to hide in a secluded place to perform their bhajan. You, however, do not accept this in your judgment.

17. Whenever there is an increase in population, there in that place preaching work is to be found.

18. In London you want a student hostel. You explain that it must be very first-class.

19. In the land of barbarians a student hostel for preaching Hari-katha! Who can understand the significance of these things?

20. To resolve all the apparently contradictory statements is not the play of some incompetent fool.

21. If everyone simply sat down together and considered these things what nice preaching there could be.

22. What is your order also, that everyone, coming together, should merge in your message and preach it to the world.

23. If everyone just initiates then there will only be a contradictory result. As long as it goes on, there will be only failure.

24. Now even, my God brothers, you return here to the order of our master, and together we engage in his puja.

25. But simply a festival of flowers and fruits does not constitute worship. The one who serves the message of the guru really worships him.

26. The service of the message is the real meaning of the Vedas. Don't be proud, brothers, Come back to this.

27. Kalidas nag (a learned man who was defeated by Srila Saraswati Thakura and later became his disciple), that master said in public forum one day.

28. That Kali's mission was to kill the entire world while the essential meaning of Lord Chaitanya's message was kept locked up in a cage.

29. O shame! My dear brothers aren't you embarrassed? In the manner of businessmen you increase your disciples.

30. Our master said to preach. Let the neophytes stay in the temples and ring the bells.

31. All these things are not our spiritual master's preaching methods. These are all the things done by the caste Goswamis.

32. But just take a look at the terrible situation that has arisen. everyone has become a sense enjoyer and has given up preaching.

33. In the temples they have also begun to lock the doors. Preach this bhagavata dharma, don't hesitate.

34. Within this world there is another world, whose sound is the unequaled penetrating force.

35. The preaching that "the mullah [Muslim priest] only goes as far as the mosque and no further" should be put to an end today.

36. From the seas, across the earth, penetrate the universal shell, come together and preach this Krishna consciousness.

37. Then our master's service will be in proper order. Make you promise today, Give up all your politics and diplomacy.

38. Everyone come together on this very day and make your valued comment. The five of you get together and decide what should be done.

39. You have become renouncers, brothers, so renounce everything. But if you also renounce the order of the spiritual master, then what kind of renunciation is that?

41. If there is only one Supreme Lord, then a true sadhu, if his faith increases, he gives up the desire for profit, distinction and adoration in the material world.

42. Your gold, brother, is the father of sense gratification. This meaningful statement was spoken by Srila Prabhupada himself.

43. Give up your wealth for preaching. Sit down together and make some special judgment.

44. The Supreme Lord Himself says that everything is Mine. Don't protest. Just unite and preach.

45. Srila Prabhupada gave this final message himself. Take great care to follow that completely in all respects.

46. Otherwise your sannyas will be wasted and useless. O saintly ones, be careful; afterwards you will regret.

47. So what is the difficulty for all of us to come together in this way and why do all these things even have to be said to you?

48. Give up your stubbornness, there is no time. Come all my brothers on this auspicious holy occasion.

49. When will that day come when there will be a temple established in every house in every corner of the world?

50. When the big court judge will be a Gaudiya Vaishnava with tilak beautifully decorating his forehead.

51. A Vaishnava winning votes will be elected president of the land and preaching will spread everywhere.

53. The demons want so many plans just to cheat the people. They see wheat flour at 32 rupees a mound.

54. Will opening a factory fill a hungry man's belly? Being oppressed by starvation they will eat grass and mango pits.

55. Wearing a two paisa string a man is called a brahmana. Wearing a saffron cloth he has become a sannyasi.

56. The householders beg from the sannyasis, and why not? The sannyasis have tens of millions of rupees in the bank.

57. As the days pass the influence of Kali Yuga increases and the poor are crying in distress.

58. Ten thousand cows are killed daily and the nations expert leaders are all eating untouchable foodstuffs.

59. People of muddy intelligence increase day by day. A man and his wife separate on a mere word.

60. Everyone has become a witch by the influence of this age. Everyone is unhappy due to the absence of the mercy of the Vaisnavas.

61 The Vaishnavas are famous as "para dukhi dukhi." This fame will increase as the preaching increases.

62. If eternally pure devotional service to Krishna is awakened in everyone, then Kali will flee, screaming of his own accord.

63. "Praninan upakaraya" do work for the benefit of all living beings. This is Mahaprabhu's teachings. This is the storehouse of happiness in this life and the next.

64. So much work has fallen into your hands, so gather together and do it.

65. Vasudeva Datta said to the Lord, paying his obeisances, save all the living beings in the material world.

66. Give all their sins and suffering to me, who am the lowest of all. In this way all the suffering and miseries of the fallen will end.

67. He was the best of Vaishnavas, para dukhi dukhi. He knows that there is not real happiness in gratifying the senses.

68. And what kind of mercy can the non-Vaishnavas give? They simply make offenses by their Daridra Naranyan philosophy.

69. The mercy of the Vaishnavas is scientific and authorized, without their mercy this world is simply insurmountable maya.

70. If there is a kingdom of Vishnu and Vaishnavas on the surface of the earth, then the world will be happy so say all the great sages and rishis.

71. Why is everyone crying for Ram-rajya? The only way it can be had is if there is a Vishnu centered kingdom.

72. Lord Krishna enthroned King Yuddhisthira; then the whole world was rich and fortunate due to the qualities of a Vaishnava.

73. The streams, rivers, trees and fields and mountains, all full of fruits and flowers. The milk laden cows were floating in abundant milk.

74. The bird, beasts and lower creatures were all non envious. Material life in the Vaishnava kingdom was regulated and perfect.

75. All immerse in bliss, sing the glories of Hari. The hearts of the Vaishnavas dance in ecstasy to see this.

76. The entire world is filled with the use of material objects, without a trace of devotion to the Lord.

77. Still they are searching after peace. Preach Krishna consciousness Fulfill their desires.

78. Today my brothers, get to this task. Save the battered souls by your preaching.

79 Srila Prabhupada, please be merciful today, This time have compassion. You are not a conditioned soul of this material world.

80. Whatever independence we have, let it be cast to the waters. The lowly Abhay offers this presentation today.