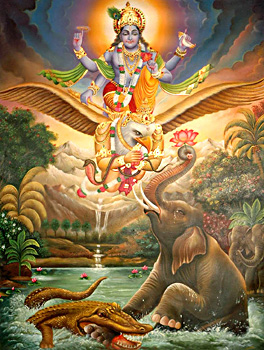 Birbal, the favourite minister of Emperor Akbar; was an uncommon man of sound common sense. Many were the scintillating conversations the two had together; time seemed to fly when Akbar was in his company.

One day Akbar said to Birbal, "I marvel at some of the fantastic beliefs that you Hindus hold. You believe that the Lord comes to this earth in the garb of a human being – what an absurd notion this is!"

"What is so absurd about it, sire?" asked Birbal. "The Creator of the cosmos is also the Father of us all. Is it so fantastic that the Father should come down to earth to save His children?"

"Of course it is fantastic and absurd," Akbar insisted. "Why should the Creator of the cosmos soil His Divine Form and plunge into the samsara sagara – the ocean of material existence?"

Birbal made no reply.

A few days passed. Akbar and Birbal were taking a leisurely stroll along the banks of the Yamuna. A pleasure boat was sailing on the river; the Emperor's infant-son sat on the knees of his nurse, and was enjoying this leisurely boat ride. When the nurse saw Akbar and Birbal on the bank of the river, she was so startled that she tried to stand up in the boat and the child on her knees fell into the river!

Emperor Akbar was astounded! Without a moment's hesitation he plunged into the cold waters of the river to save his son. Swimming fast, he reached the floating child- only to realize that it was but a doll that had been thrown into the waters!

Birbal swam after the king to meet him mid-river. "Even as an earthly father, sire, you plunged into the waters and did not in the least bother about your royal robes getting soiled and wet." he said to Akbar. "Does our Heavenly Father not love us a million times more than we love our children? Would He not plunge into the murky waters of the samsara-sagara to save His children?"

The Emperor made no attempt to answer his Minister.

Sometimes, people in general are in doubt that whether God, Himself, personally comes to save His loving devotees when they are apparently in trouble or its just a fiction created by some age-old authors or poets??

Srila Prabhupada instructs that the Lord is very kind to the living entities because they are His sons. Lord Krishna declares in Bhagavad-gita, sarva-yonisu…aham bija-pradah pita: "I am the father of all." Of course there are all types of living entities according to their various karmas, but here the Lord claims that He is the father of all of them. Therefore the Lord descends to reclaim all of these fallen conditioned souls, to call them back to the sanatana eternal sky so that the sanatana living entities may regain their eternal sanatana positions in eternal association with the Lord. The Lord comes Himself in different incarnations, or He sends His confidential servants as sons or His associates or acaryas to reclaim the conditioned souls. Therefore, He is the greatest well-wishing friend of everyone.

Since the Lord comes to teach in so many forms, no one can say that there is no God.

Srila Prabhupada further teaches us that when a devotee receives initiation from his spiritual master he is freed from his karmic reactions. Pains and pleasures that may appear like continuing karmic reactions are merely the residual effects of non-devotional activities, like the last revolutions of an electric fan after it's been unplugged. But everything depends on the sincere execution of devotional service. One who again regularly transgresses the laws of God, even after taking the vows of initiation, is once more subject to the merciless dealings of the material nature.

King Kulashekhara very positively prays in this regard in his classical Mukunda-Mala-Stotra 10 as:

"O foolish mind, stop your fearful fretting about the extensive torments imposed by Yamaraja. How can your enemies, the sinful reactions that you have accrued, even touch you? After all, is your master not the Supreme Lord, the husband of Goddess Sri? Cast aside all hesitation and concentrate your thoughts on Lord Narayana, whom one very easily attains through devotional service. What can that dispeller of the whole world's troubles not do for His own servant?"

Further, King Kulashekhara prays for protection from the Lord in this way:

"May Krishna, the spiritual master of the three worlds, protect us. Continually bow down to Krishna. Krishna has killed all our enemies. Obeisances to Krishna. From Krishna alone this world has come into being. I am the servant of Krishna. This entire universe rests within Krishna. O Krishna, please protect me!

When we're chanting the Hare Krishna Maha-Mantra, we're actually asking the Lord of our hearts His divine and transcendental service. It is said to be like a genuine cry of a child for his mother for protection from any danger.