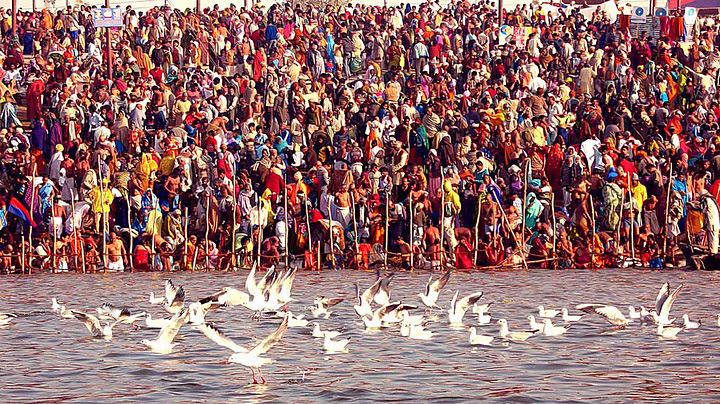 What temple in the world would not be overjoyed to get such a preaching opportunity in their own back yard! But our Vrindavan Temple has not shown any interest in setting up a camp there. How is it possible that ISKCON not be represented in Vaisnava Mela? So Jankinath Prabhu, who does the Prison Preaching on behalf of Vrinda Kunda came to me and encouraged me that we should set up a camp there. So Vrinda Kunda Mandir is setting up a camp in the mela.

Even at the very late date, Jankinath was able to get alloted a very prominent acre plot at an intersection just next to where all the sadhus will bathe and just 200 feet from the Vrindavan Parikrama Marg! We will be distributing prasadam to all the sadhus, Brijbasis, and pilgrims. His Grace Jasomatinandan came and inspected our camp site. We would like to thank him for his kind donation of Rs.50,000 to help with our camp. Prem Kishore says he will also help for distributing halevah prasad. We will also be showing videos every evening of Srila Prabhupada and ISKCON's worldwide activities. And His Grace Aindra Prabhu has just promised to come and chant in our camp from 4-5 every evening! And of course daily Harer Nama

On 31st January, we will have a procession with all the Vaisnava Mahants carrying their flags and symbols. They will come to our Krishna Balarama Mandir and for the first time in the history of any Kumbha Mela, we will take Srila Prabhupada on an elephant thoughout the town of Vrindavan and through the Kumbha Kshetra to our camp. We have done processions as part of the Kumbha, but this is first time it is exclusively our procession for entering the Kumbha Mela. Mohanrupa is going to send 30 devotees from Delhi to take part.

The District Administration has spared nothing in setting up the area of the Kumbha Mela. Very nice gravel roads are there, hand pumps for water every 100 feet, very nice electrical arrangements, everything first class. Even the Chief Minister of Uttaranchal, where Haridwar Kumbha is taking place, came for the inauguration on Vasant Pancami and was very impressed.

So there is double benefit: the 7th Anniversary Vrinda Kunda Festival Parikramas are going on and Kumbha Mela in Vrindavan. So come and take part!

In Tamal Krishna Maharaja's Diary on October 28,1977 just two weeks before Srila Prabhupada left this world, Tamal tells Prabhupada: Bhavananda Maharaja was suggesting that in the open land next to the gurukula, we build a prasadam pavilion and serve free prasadam to the pilgrims and sadhus. I don't know whether it is a good idea.

This was one of the last desires of Srila Prabhupada to distribute prasad to the sadhus and pilgrims. For anyone who wants to assist in any way or sponsor prasad distribution may contact me at dbdas@pamho.net.

The Information Center can also be contacted for taxi pickup or drop off from/to Delhi Airport or Train Station. They can also assist in accomodations in Vrindavan and booking train tickets on to Mayapur Festival and any other assistance you require. iskcon.vrindavan@pamho.net or +91 09897020343 (Sanjaya).