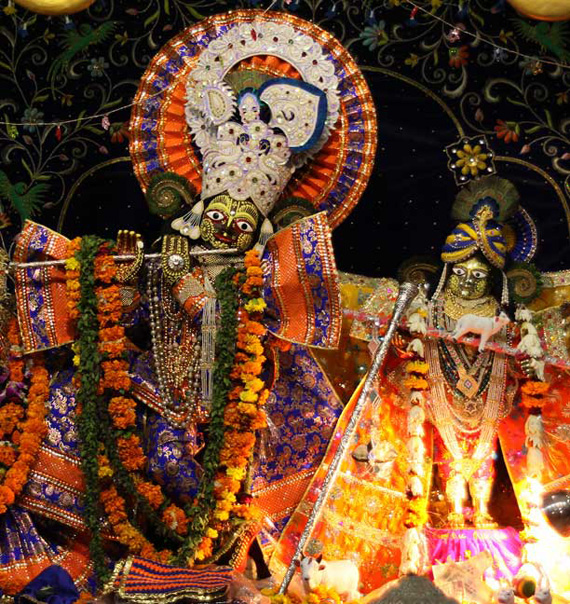 This year, on October 31st, on the Sukla-paksa Trayodasi during the month of Karttika, devotees celebrated the day that Srimati Radharani dressed in Subala-vesa – the dress of the cowherd boy Subala. In the dress of a cowherd boy, the lotus feet of Radha are visible during darsana. This is called radha-pada-darsana and only happens one day in a year. Indeed, it is a rare occasion. Thousands of devotees packed the courtyard of the Radha-Damodara Temple from morning to night with great expectations of glimpsing the lotus feet of Sri Radha.

The pastime of Radha accepting Subala-vesa (Subala-milana) is described in the book Sankirtanamrta, written by a recognized Vaisnava named Dina Bandhu Dasa who followed after the time of Visvanatha Cakravarti Thakura. Srila B.R. Sridhara Deva Gosvami summarizes Subala-milana as follows:

Sometimes Subala played proxy for Radharani. One day in the pasture ground, Krsna suddenly felt extreme separation for Radhika. Krsna sent for Subala, “Oh my Radha – please go and fetch Her, I can't live without Her. Suddenly I have so much earnestness for Her union that I can't stand. Somehow you must manage.”

Subala replied, “But how is it possible to take Her in the jungle in broad daylight?”

“Anyhow,” Krsna said, “You must manage.”

Subala came and proposed to the sakhis of Radharani that, “Such is the condition, Krsna can't stand; He can't tolerate the separation of Radharani. He is so eager, He is going mad.”

"You have to manage somehow."

"How is it possible?"

A meeting was to be arranged nearby in the jungle. This is known as Subala-milana. They discussed amongst themselves. Subala was a boy, fair looking and the brother of Radharani. His figure, face and color resembled something like Radharani. So Subala was sent to Radharani's house and he took the dress of Radharani. The other party, anti-party [Jatila] approached, “Subala, why have you come here?”

Subala replied, “One calf is missing and its mother is roaring, so I have come to find out if the calf has come here.”

She approached in the garb of Subala. Krsna was mad and beside Himself. He could not detect that Radharani had come. “Oh, Subala, you have come back? You could not bring Her?

Radharani began cutting jokes, “No, it is not very easy to get Radharani in the daytime.”

Then Krsna could not tolerate, “What to do, I can't tolerate My life any longer!”

Radharani said, “If you say, I will bring Candravalli.”

“No, no”, said Krsna, “Curd cannot satisfy the thirst of milk. It is not possible.” “Oh, you could not manage.” And being disappointed Krsna fainted. Then Radharani embraced Krsna.

“My Lord, you can't recognize Your maidservant. You failed to recognize me? You have such little liking for me in you that you could not recognize Me?” Then Krsna was again pacified and regained consciousness.

In Vrndavana, to commemorate this pastime, on the Sukla-paksa Trayodasi, all the major temples dress Radharani as Subala. Due to Her wearing a cowherd boy’s dhoti, Radharani’s feet are visible at that time (radha-pada-darsana).

During all other times of the year the feet of Srimati Radharani are not visible to the devotees. One can thus imagine what intensity arises in the devotees when the day of radha-pada-darsana arrives — very, very intense indeed.

The understanding of Subala-milana is possibly deeper than most of us are prepared to recognize. Krsna can only be approached thru Radharani, and Radharani is also not to be approached directly. Only by approaching Her representative can one approach that plane of divinity. Also, we must consider that even in the matter of the darsana of Sri Murti, the darsana of Radha’s lotus feet is available only indirectly and only once a year — a rare occasion.

Yet, ever so often, we find that the concept of radha-dasyam (becoming Radha’s servant) is dealt with rather casually, when in fact one should hold the desire of such exalted service above one’s head with the greatest reverence. Reverence for that highest plane of spiritual attainment is in great demand and thus one should treat such with the greatest respect, abandoning familiarity.

Familiarity in that arena for the neophyte will lead not to success but to ruin. The aspiration for the service of Sri Radha and the darsana of Her lotus feet is always to be kept above our heads as our greatest aspiration and the ultimate goal of life. We should not think that it is such an easy attainment, nor should we make it the topic of public lectures and pamphlets in the name of attracting many followers or disciples.

Failure to heed such warnings, as given by our previous acaryas, lead not to the darsana of Srimati Radharani but to the inspiration to live in a fool’s paradise — fools rush in where angels fear to tread!

Those that approach the lotus feet of Srimati Radharani thru the prescribed method of worshipping Lord Gauranga in sankirtana are indeed engaged in the proper approach – not those who think they can approach Her directly by performing various concocted gopi and manjari meditations. As Prabodhananda Sarasvati assures us:

One who is extremely fortunate may get the mercy of Caitanya Mahaprabhu. As much as one can devote his full attention to the lotus feet of Lord Caitanya, to that extent he will be able to taste the nectarine service of the lotus feet of Srimati Radharani in Vrndavana. The more one engages in the service of Sri Caitanya, the more one finds oneself in Vrndavana, tasting the nectar of the service of Sri Radha. (Caitanya-candramrta 88)

Srila Bhaktivinoda Thakura has also said, “Stick to the rulings of the class you are fit for, then you will see automatically.” Strictly stick to gaura-lila, Mahaprabhu, and you will automatically find within your heart that radha-rasa-sudha-nidhi is flowing. Don’t attempt directly to have it. It will come automatically, spontaneously. Not intellectually you shall approach that, for that will give you a bad prejudice. Not only that, but it will be harmful prejudice and you will have to expend more energy to do away with that layer of misunderstanding. So our Srila Prabhupada [Bhaktisiddhanta Sarasvati Thakura] did not allow these things. Do your duty in your plane, according to what you deserve, and that will come naturally. That is his instruction all through, not only temporarily, but all through. Don’t do like that, for then you will get Maya instead of Yogamaya.

Those who are actually wise will consider the above instructions of Prabodhananda Sarasvati, Bhaktivinoda Thakura, Bhaktisiddhanta Sarasvati and Sridhara Deva Gosvami not as an admonishment, but as a blessing – an indirect benediction. Gaura Haribol!